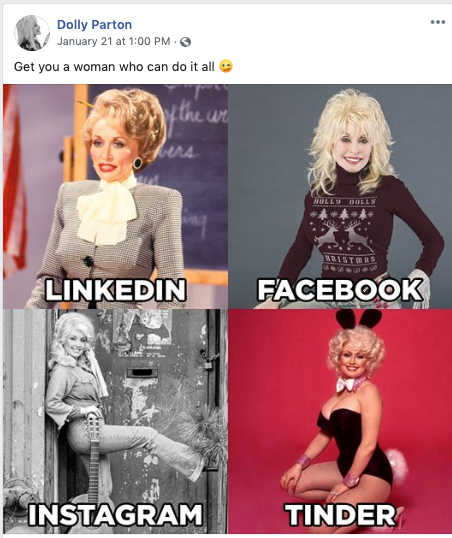 Parton (or the people managing her page, although we’ll give Dolly credit for simplicity’s sake) is credited with getting it started with a photo of herself in a business suit representing LinkedIn, a typical wholesome shot for Facebook, a picture with her artistic side for Instagram, and a revealing-but-not-too-revealing photo of herself in a Playboy bunny costume for Tinder.

To date, the post has garnered more than half a million likes and nearly 10,000 comments on Instagram alone, making it — at the risk of mixing a metaphor — the hottest thing since the Ice Bucket Challenge. The challenge has also spawned countless imitators, including brands like Heineken, Qdoba, and Universal Studios.

So, if you’re hoping to start, or at least capitalize on, the next viral social media moment, it’s worth considering two questions:

• Why did the Dolly Parton challenge take off?

• What should you do about it the next time you spot a trend-in-the-making?

A few things to keep in mind:

• It worked because Dolly Parton is almost universally revered. Parton’s 50-year career has made her a legend, and she’s avoided the scandals and missteps that plague many celebrities. In short, it’s hard to find anyone who has a bad word to say about Dolly Parton. Because we like her, we’re more likely to like and seek to imitate her content.

• It was unexpected. You wouldn’t guess a 74-year old would ignite a social media sensation. Also, the post was atypical for Parton, who typically shares throwback photos with highlights from her career or shots showing her with other celebrities. The challenge is surprising enough that it captures attention even from those with only a passing interest in Parton.

• It was provocative but not too provocative. The punchline in the post is the Tinder photo. It plays against Parton’s wholesome image but still rings consistent with an app that’s known as anything but wholesome. The photo comes from an actual (fully clothed, it should be said) Playboy shoot Parton did in 1978, which was controversial at the time.

In retrospect, however, it’s very tame — and, therefore, consistent with her image.

• You can understand it at a glance. In today’s communication environment, you only have seconds to capture the audience’s attention. If you’re going to earn their engagement, they need to be able to understand your post right away. Parton’s post is the perfect blend of brevity and implied substance.

So, what should your brand do when the next Dolly Parton challenge emerges?

• Act quickly. There is a sweet spot between getting on board too soon — before the trend is well known — and getting on board too late — when it’s passé. About a week after Parton shared the initial post, it reached its saturation point. Brands who jumped on board after that seem late to the game.

• Play, don’t sell. Parton’s post wasn’t intended to promote anything specific and didn’t strive to put money in her pocket — at least not directly. If your brand takes a similar approach, it will come off as friendly and playful. If you try to leverage it for monetary gain, it will fall flat.

• Use the appropriate hashtag. The importance of hashtags is often overstated, but this is a case where you definitely want to make your post discoverable among the others that participate. In instances like this, the audience wants to see who’s playing along and — almost without exception — they start by clicking on the hashtag. It’s the best way to make sure your post reaches an audience beyond those who follow you — and maybe earn a few new followers.

• Make sure you understand it and take your best shot. Getting it wrong is even worse than not participating at all. Do your research and make sure that your post isn’t off-key, or you’ll look out of touch.

• Timing matters. Post at a time that’s optimal for each platform and your audience. If it’s good enough, the audience will respond regardless. If you have something really great to share you’ll want to give it the best chance to be seen.

Finally, it’s important to note that you don’t control whether a “challenge” (or an individual post, for that matter) goes viral. That’s up to the audience. However, by following the recommendations above, your posts have a better chance of getting attention. Maybe not Dolly Parton-level attention, but enough to make a few new fans and entertain the ones you already have.