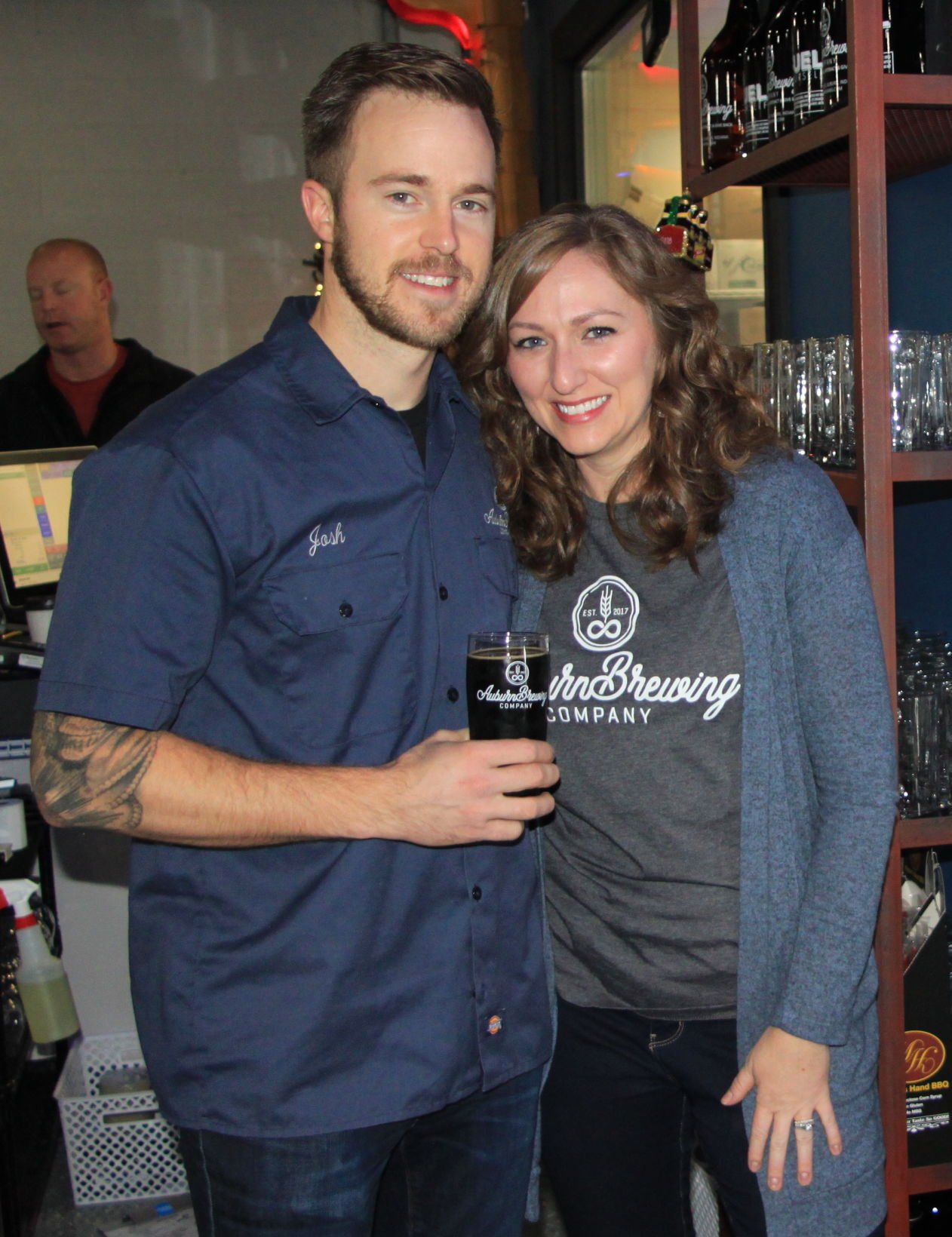 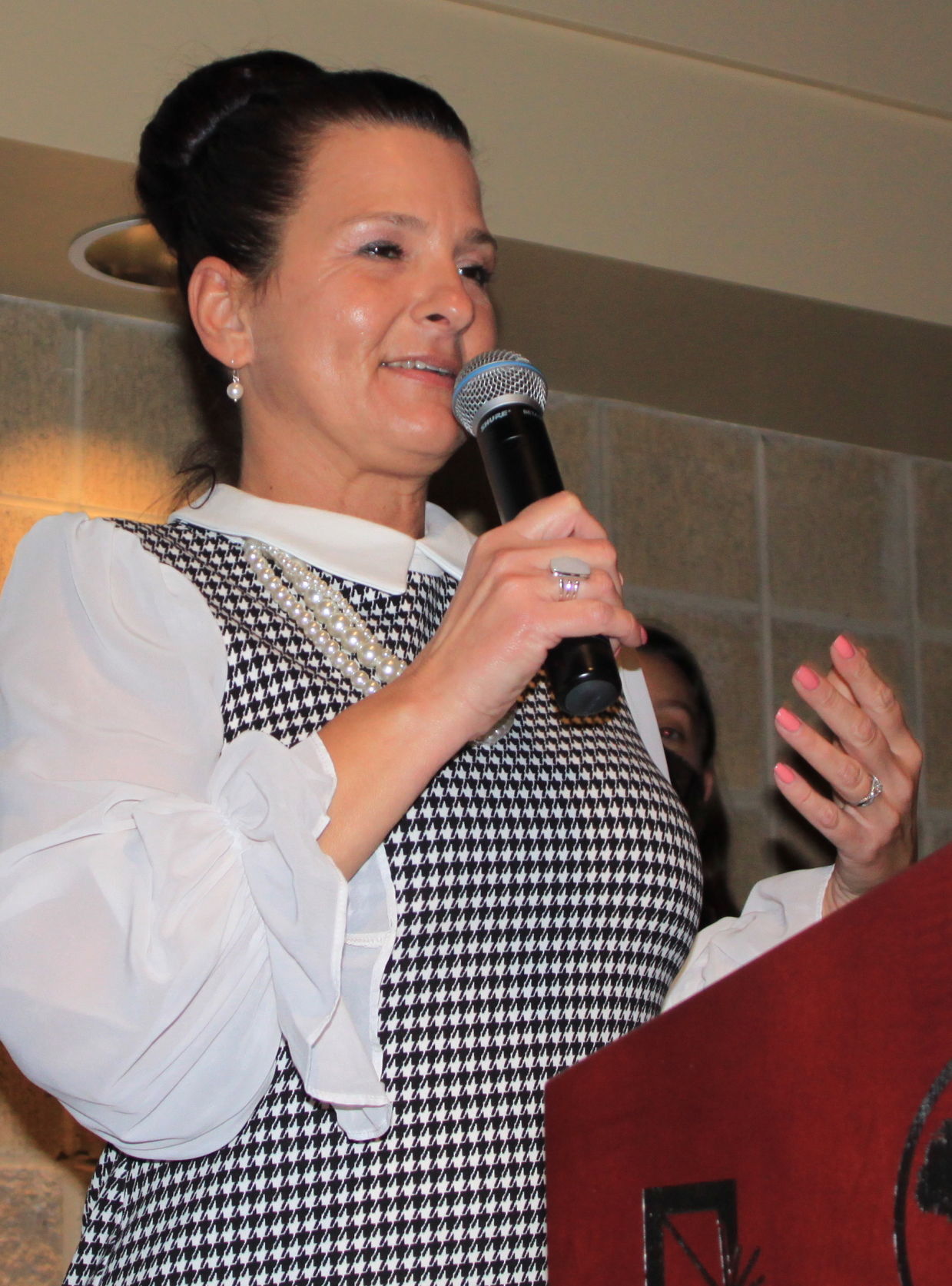 Jason Sweitzer, president of Tempus Technologies, accepts the company’s Duesy Award for Business of the Year. 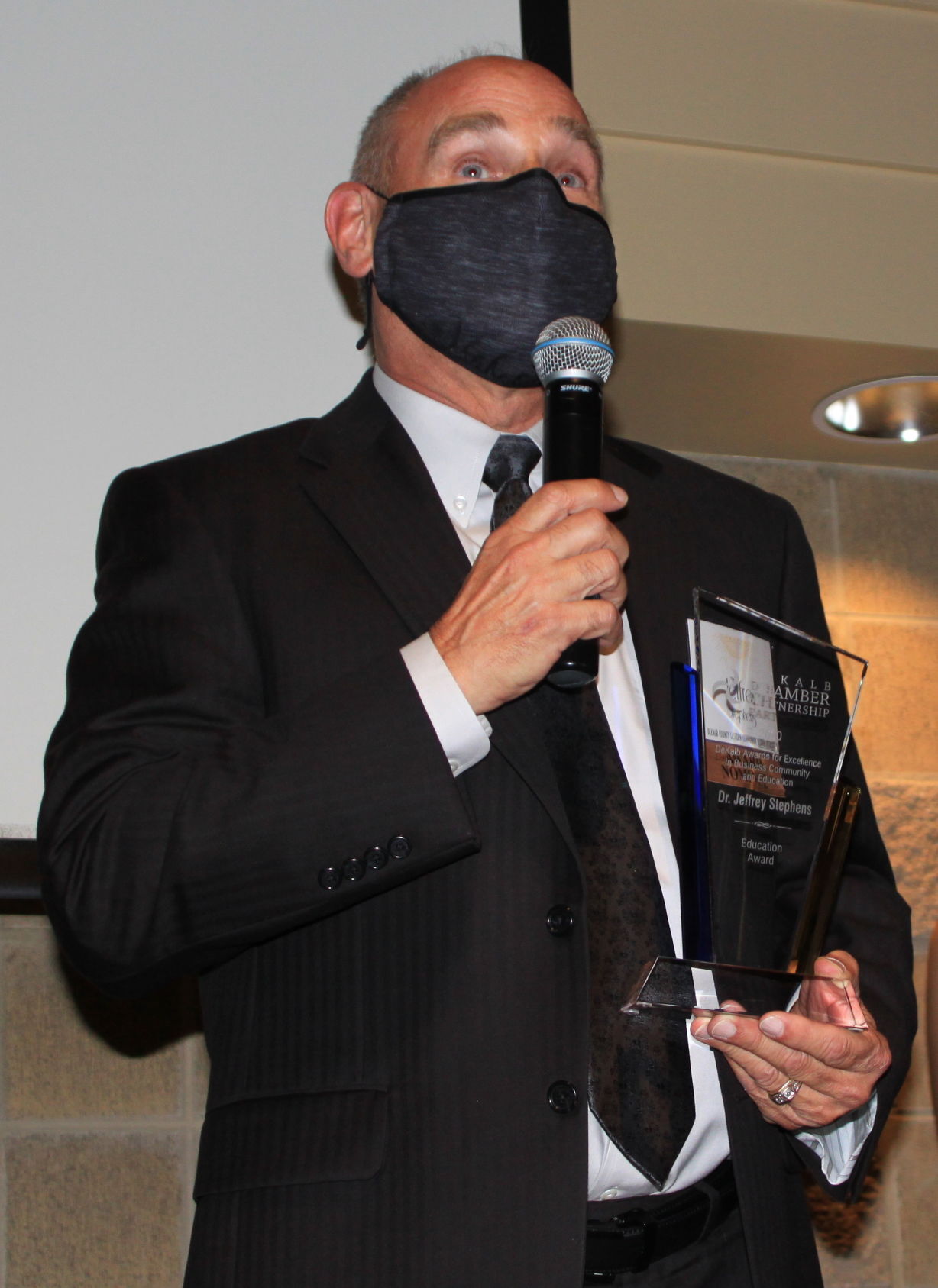 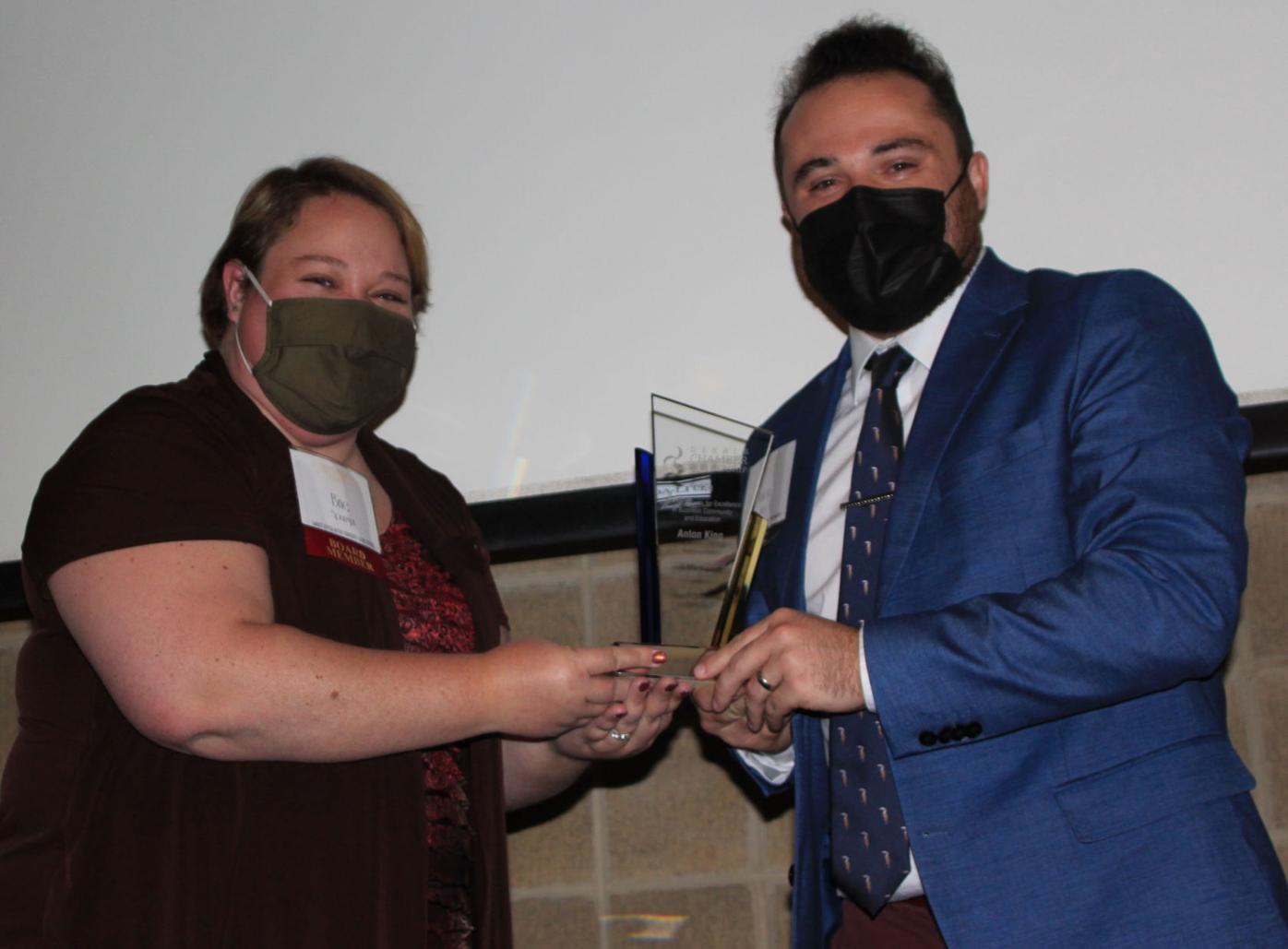 Anton King, executive director of the DeKalb County Economic Development Partnership, accepts the Duesy Award for Young Professional of the Year from Brie Sprunger, board president for the DeKalb Chamber Partnership. 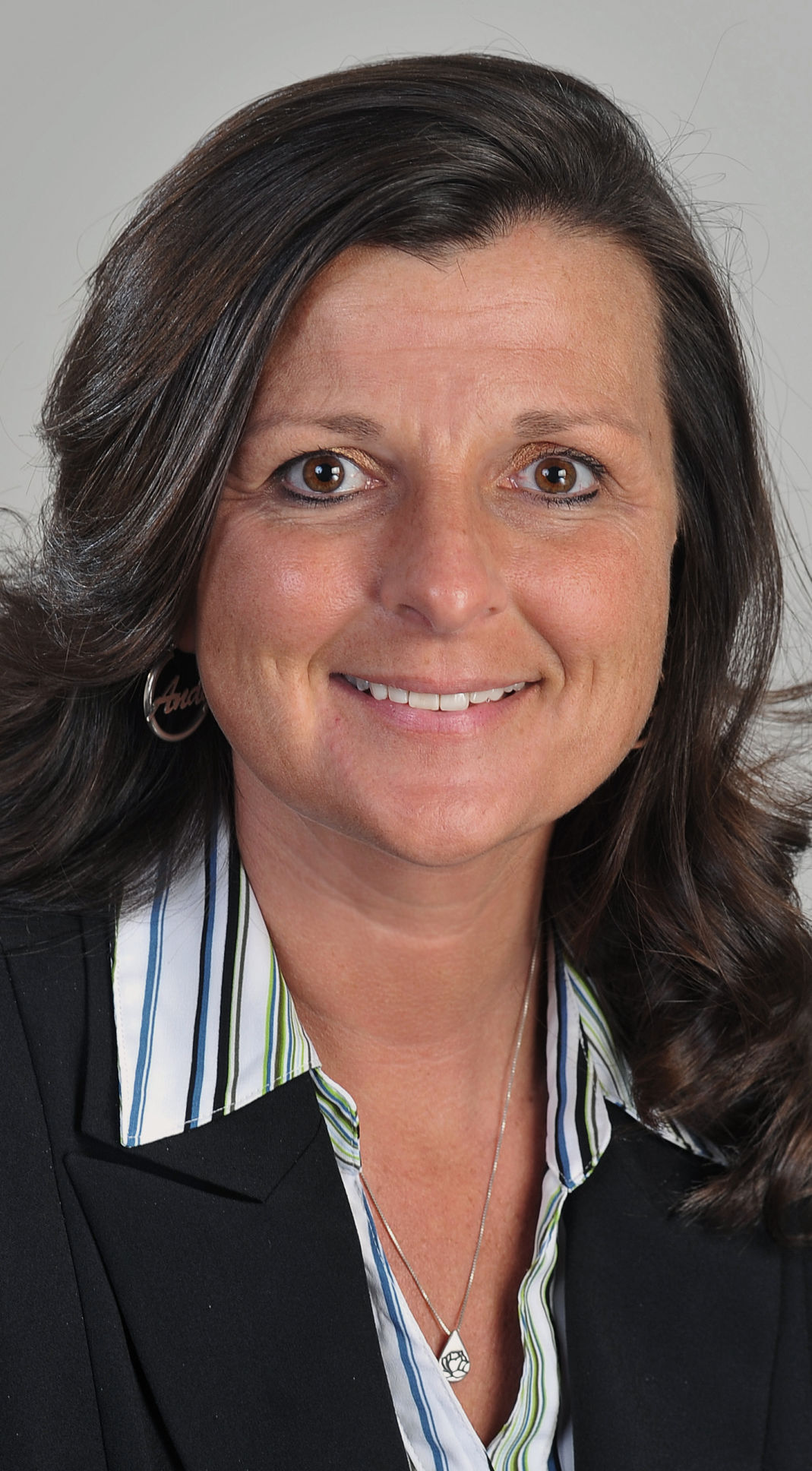 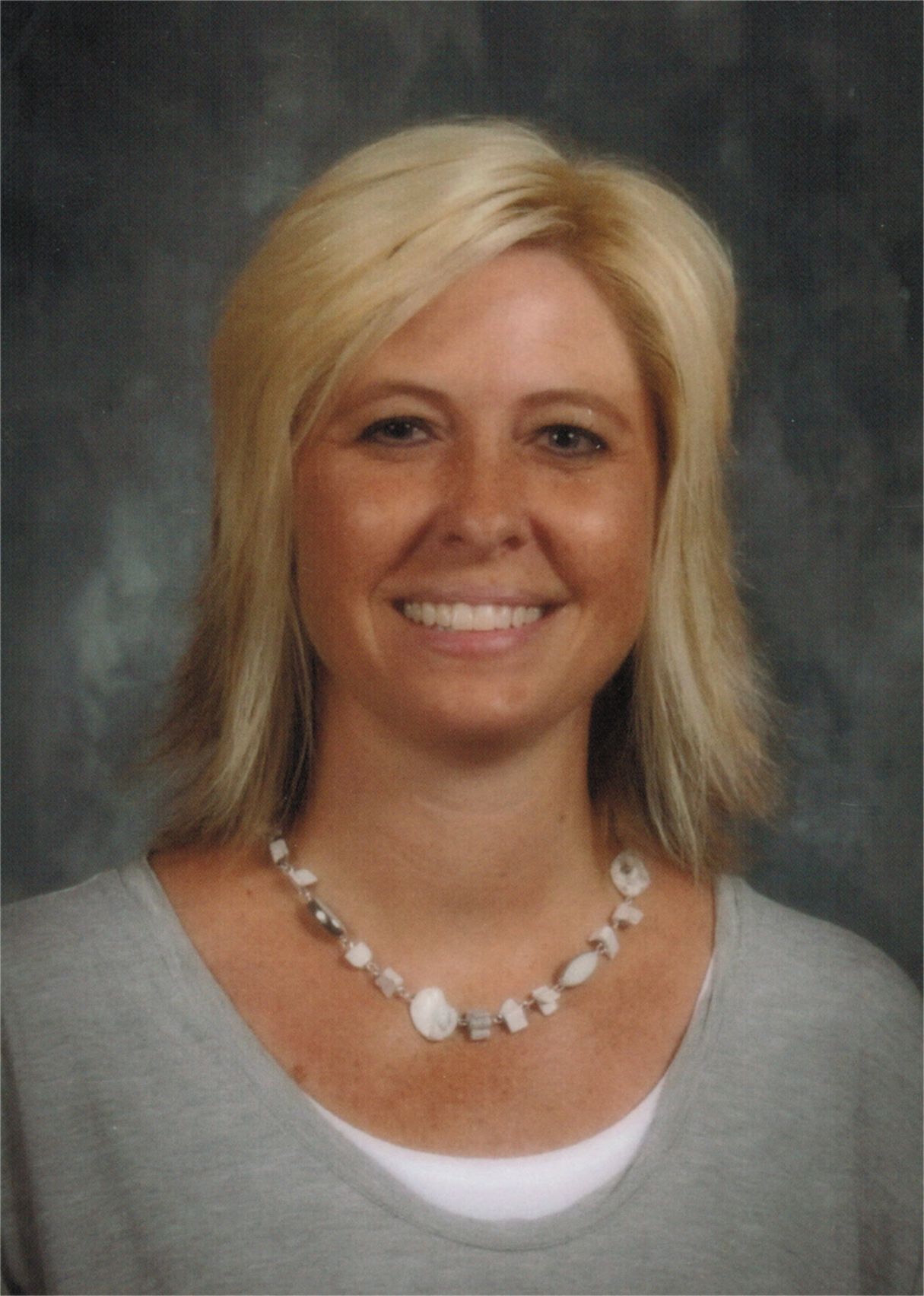 Jason Sweitzer, president of Tempus Technologies, accepts the company’s Duesy Award for Business of the Year.

Anton King, executive director of the DeKalb County Economic Development Partnership, accepts the Duesy Award for Young Professional of the Year from Brie Sprunger, board president for the DeKalb Chamber Partnership.

The DeKalb Chamber Partnership presented the eight awards for excellence in business, community and education at the Auburn Cord Duesenberg Automobile Museum.

The night’s most prestigious honor, the Allen Graber Citizenship Award, went to Terry Rayle, the chamber’s longtime program director. Rayle “truly has a service heart,” the chamber said in its presentation.

“I really believe that … God placed me in the position where I was and kept using me … and I just believe that we are here to serve our community,” Rayle, 70, of Auburn, said in accepting the award.

“We live in a great community,” he said. “We all help each other, and we all continue to serve, and we’re generous, and we’re always looking how we can improve and help the next person, and I ask that all of you continue to do that.”

The award goes to “somebody who is giving back to their community … investing in the good of others … who really believes in DeKalb County,” said Shannon Carpenter, executive director of the chamber. She thanked Rayle for mentoring her.

Other finalists for the citizenship award were Larry Getts of Garrett and Mary Diehl of Spencerville.

The Graber award is named for an Auburn businessman who tirelessly promoted the community and recruited new industries during an economic slump in the 1980s.

Carpenter said the chamber received more than 200 nominations for the Duesy Awards from the community and narrowed them to three finalists in eight categories.

Tempus Technologies won the award for Business of the Year. Founded in 1987 and based in Auburn, Tempus specializes in secure payment transactions.

“We’re really looking for companies, small or large, that have given back to their community — great community stewards who are pushing DeKalb County forward, taking us as a whole to the next level,” Carpenter said.

“We’ve had a great deal of support from the community, hiring amazing people from the talent pool here, looking to hire a lot more,” company president Jason Sweitzer said. “We hit 135 this year and have a bunch more to hire, so we’re really looking forward to investing back in this community.”

Other finalists were Credent Wealth and First Source Bank.

The award for Small Business of the Year went to Auburn Brewing Company, a 2-year-old craft brewery.

Owners Josh and Emma Metcalf were not present, but Josh Metcalf sent an audio message to the gathering. He said the business is excited to be able to donate to nonprofits through its Beer for Good promotion and is preparing a benefit for Toys for Tots.

R.P. Wakefield Co. of Waterloo and Oak Partners of Auburn were finalists for the small business award.

Hearten House Gospel Rescue Mission of Auburn, a 2-year-old shelter for women looking to escape the ravages of homelessness, received the award for Nonprofit of the Year.

“The biggest honor is all the lives that are being changed,” Hearten House Executive Director Marisa McKenzie said.

“When we see women come to our program who feel hopeless … and they leave strong and courageous and reunite with their children, and they get their own places, they become members of churches, they work full-time in companies … It’s just been such an amazing honor … to witness lives being restored,” McKenzie said. “Really, it’s because the real executive director is Jesus Christ, and he’s the one who does that in our facility.”

DeKalb Central Food Service and United Way of DeKalb County were finalists for the nonprofit award.

Jeffrey Stephens, superintendent of the DeKalb Eastern school district since 1997, received the Education Award. He has announced that he will retire March 5, 2021.

“This is for all the educators, all the superintendents, administrators, teachers and staff throughout the county. The county schools do an amazing job,” Stephens said. “I was told a long time ago, ‘As superintendent, your job is to hire excellent people and get out of the way,’ and I tried to use that throughout my career.”

The late Piper Placencia of Garrett received the Educator of the Year Award. She died in June at age 47. She started the art program at Lakewood Park Christian School of Auburn in 2004 and taught there for 12 years, before teaching at Garrett Middle School and Garrett High School.

She was “a shining light for her school district, always encouraging, always giving hope, always supporting,” the chamber said in making the presentation.

Her husband, Ray, accepted the award and spoke in tribute to her.

“I think what made her a great educator is she just cared,” he said. “She didn’t favor kids just because they were good. She cared about everybody, and that’s what made her special.”

Kim Randinelli and Bobbie Moughler were finalists for Educator of the Year.

The Seasoned Professional of the Year award went to Tanya Young, executive director of the Community Foundation DeKalb County.

Carpenter said the award is for “somebody who gives back to the community, who has a heart for service and who really looks to embrace the next generation and how they can help the future leaders who are coming up.”

Young was not present at the ceremony. The chamber said she “has a passion for DeKalb County that is infectious and encourages those around her.”

Other finalists were Bob Krafft, CEO of the YMCA of DeKalb County, and Steve Bingham, planning director for the city of Butler.

The award for Young Professional of the Year was presented to Anton King, executive director of the DeKalb County Economic Development Partnership.

“We’re looking for somebody who is an innovator … who’s been a leader in their industry … somebody who’s looking out for an opportunity to better themselves and the community around them,” Carpenter said about the category.

“It’s been a really good community to work in,” King said about DeKalb County. “We’re headed in the right direction.”

Other finalists were Chris Webb of FXI and John Davis of First Source Bank. Both businesses are in Auburn.

The chamber presented an award to retiring board member Chris Rowe and introduced two new board members, Allie Cochran of the YMCA of DeKalb Cuonty and Melissa Eshbach of Star Technology.