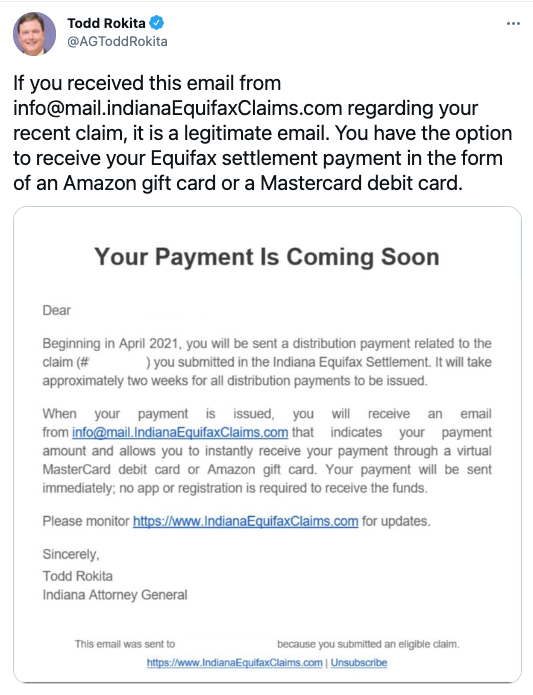 The Equifax settlement came to qualifying Hoosiers on April 14 in the form of an email.

We can always use a little extra cash, even if it's virtual.

We, like many other Hoosiers, got an email April 14 about our portion of the Indiana's settlement with Equifax over a data breach.

We're always skeptical of emails, but Indiana Attorney General Todd Rokita informs the public that the email is legitimate.

Hoosiers who qualified for the settlement received a little over $79 each.

The Attorney General’s office is distributing payments to 236,616 current and former Indiana residents who filed eligible claims for restitution after the massive 2017 Equifax data breach.

The Office of the Attorney General sued Equifax — one of the world’s largest credit-reporting bureaus — in May 2019, two years after the company suffered a data breach that impacted approximately 147 million Americans, including roughly 3.9 million Hoosiers. Social Security numbers, dates of birth, addresses, driver’s license numbers and credit card information were compromised in the data breach.

Last year, the office announced that Indiana would receive $19.5 million under a settlement with Equifax.

For more information about Indiana’s settlement with Equifax and answers to frequently asked questions, visit IndianaEquifaxClaims.com.