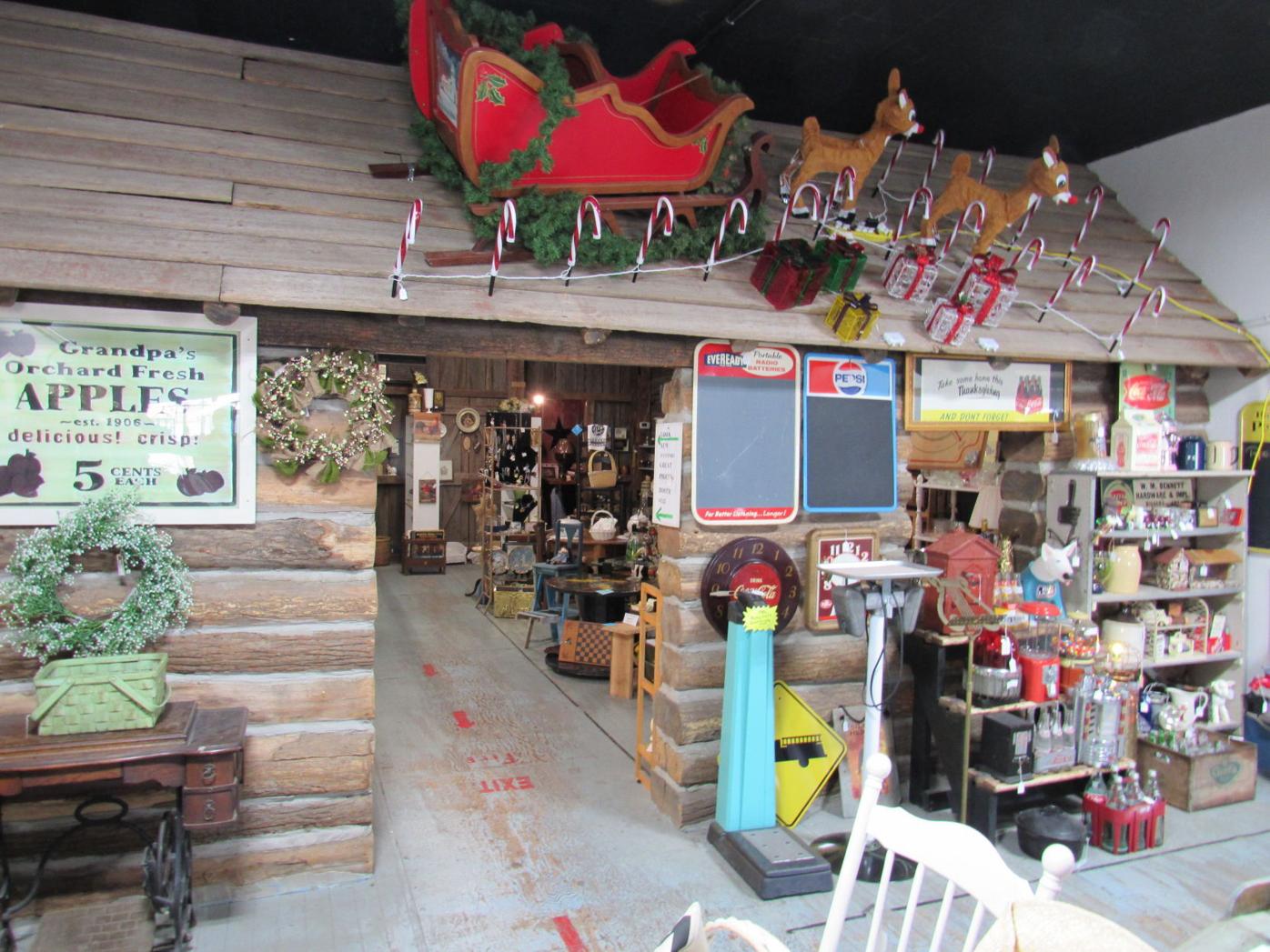 The Log Cabin Room at the Country Shoppes of Grabill has been totally renovated with a new floor, ceiling and LED lighting. 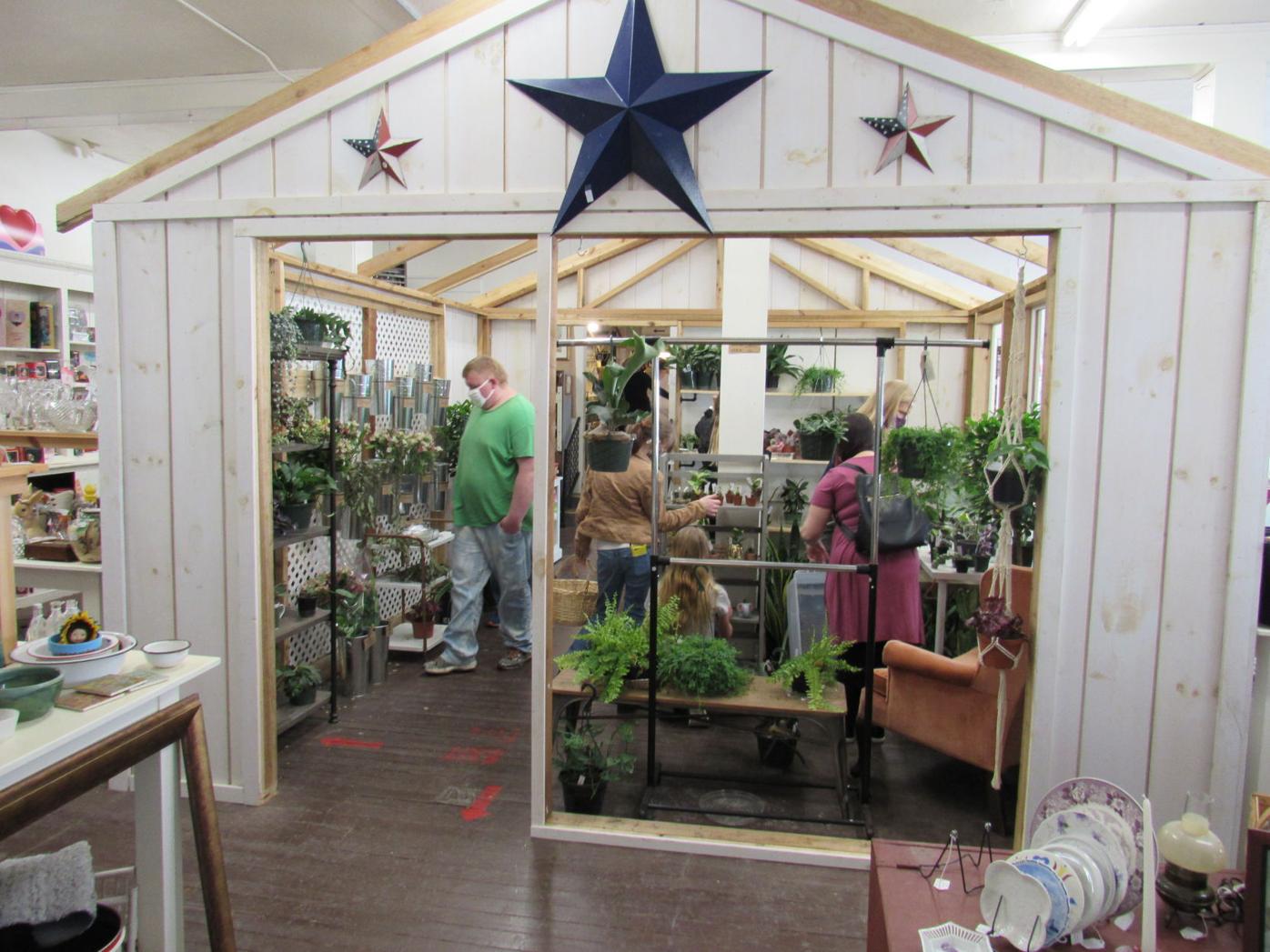 The plant shop is a store-within-a-store, featuring a see-thru entry wall. 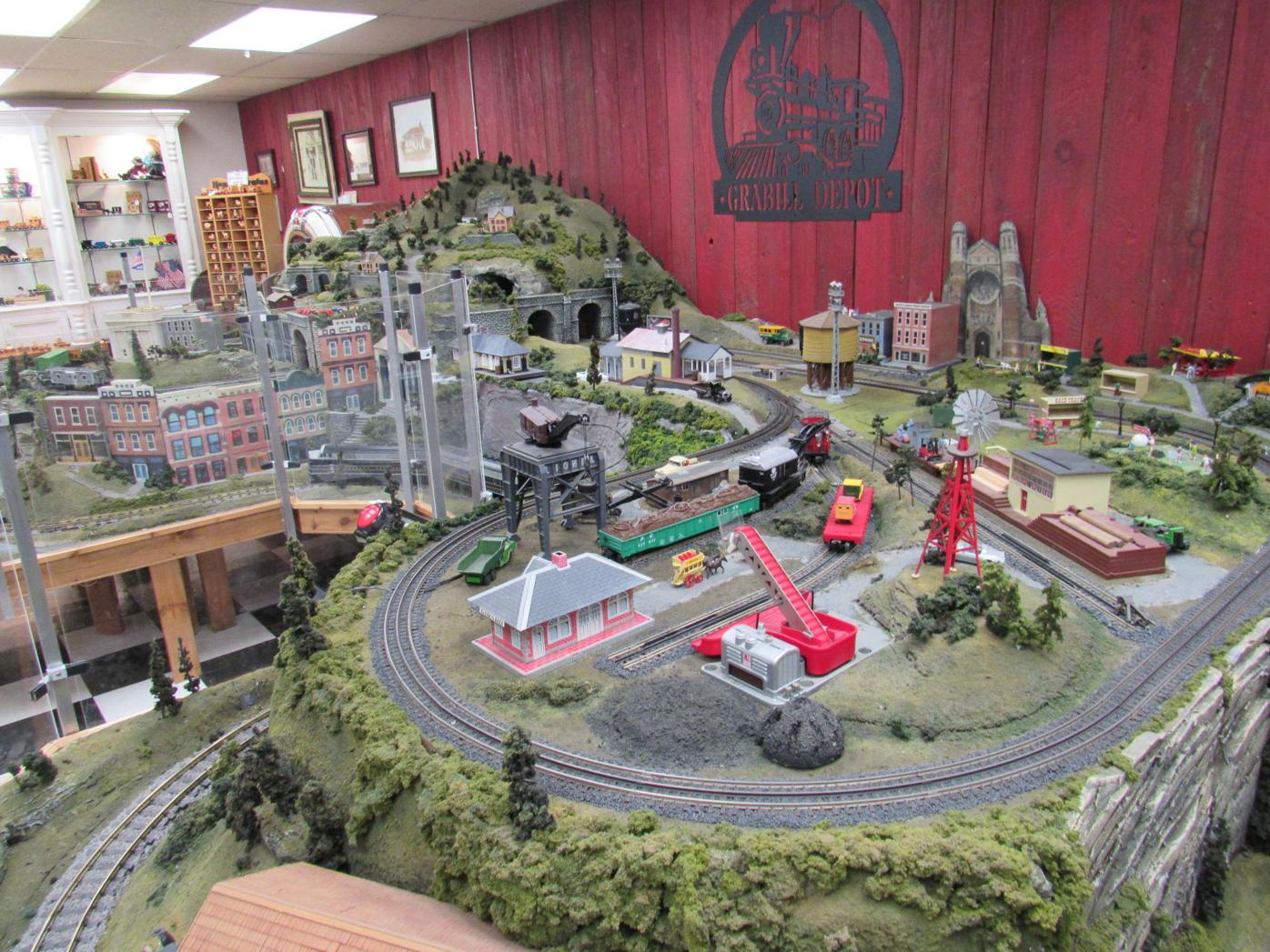 An impressive model train display welcomes visitors to the Elmer Express and announces that the next stop is Grabill Station. 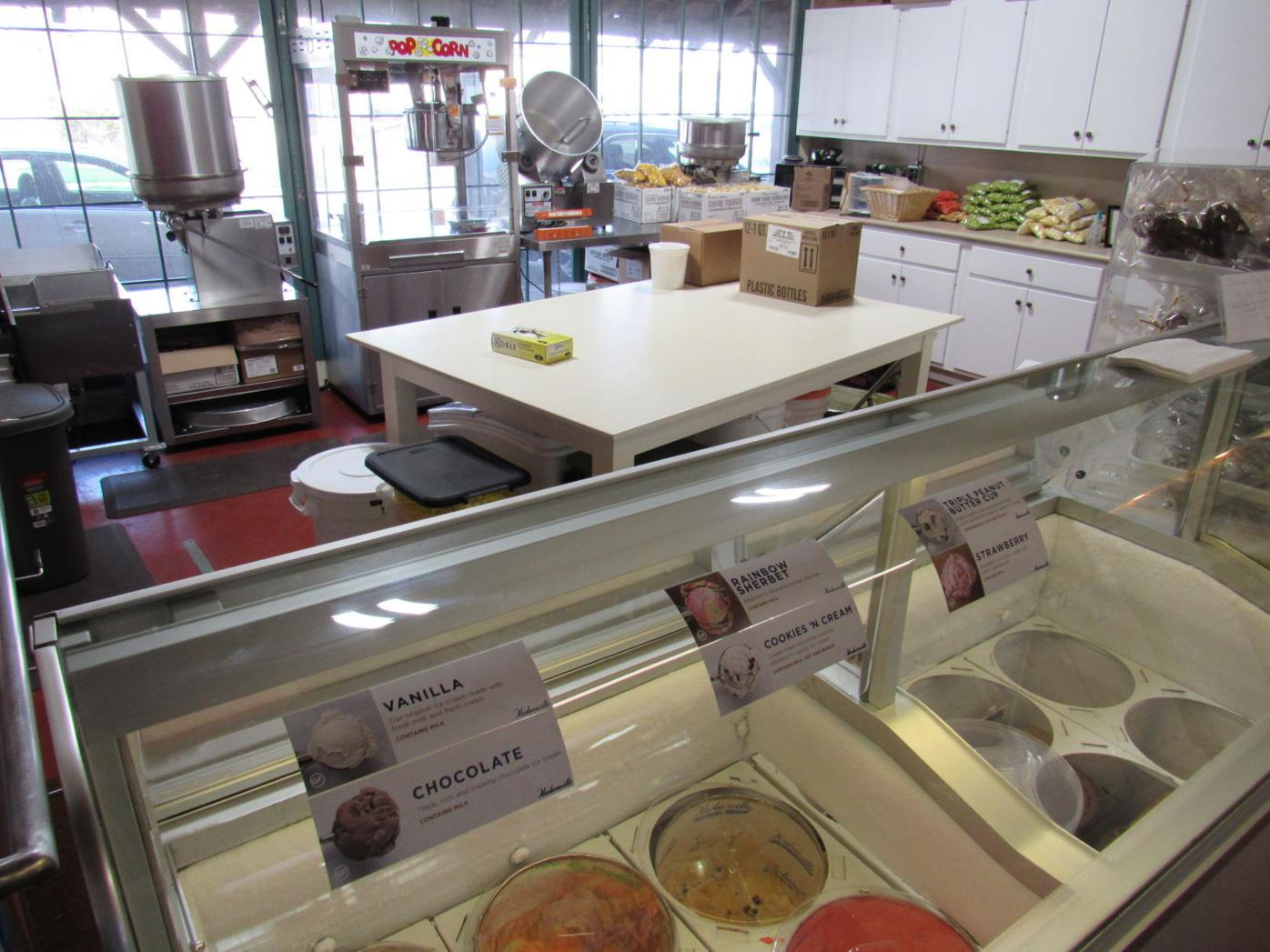 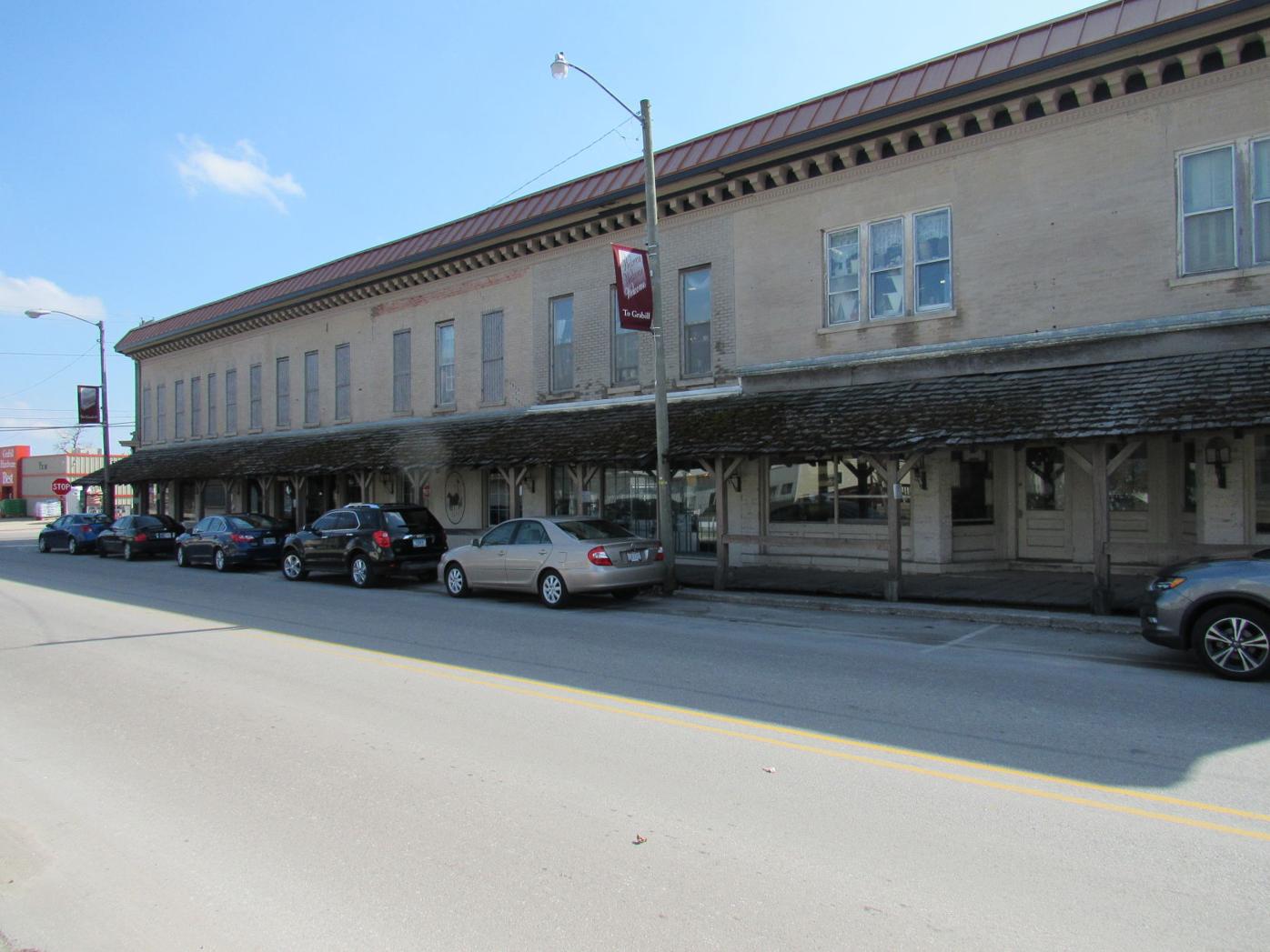 The Country Shoppes of Grabill, which was purchased last year by Elmer Lengacher, has a new copper roof and LED lighting. He plans a number of exterior changes along with renovation of the interior.

The Log Cabin Room at the Country Shoppes of Grabill has been totally renovated with a new floor, ceiling and LED lighting.

The plant shop is a store-within-a-store, featuring a see-thru entry wall.

An impressive model train display welcomes visitors to the Elmer Express and announces that the next stop is Grabill Station.

The Country Shoppes of Grabill, which was purchased last year by Elmer Lengacher, has a new copper roof and LED lighting. He plans a number of exterior changes along with renovation of the interior.

One of the first changes Elmer Lengacher made after buying the Country Shoppes of Grabill last year from former Congressman Mark Souder and three other owners was to change the audio of the model train layout. Now when visitors push the big red button to activate the trains, they hear “Welcome to the Elmer Express. Next stop Grabill Station.” That’s just his wry sense of humor at work.

When it comes to the Country Shoppes and anything to do with Grabill, however, he’s totally serious. In addition to renovating the Shoppes, his grand plan is to make Grabill a Northeast Indiana destination for dining, shopping and fun.

Most people visiting the Shoppes probably hadn’t noticed that the building now has a new copper roof and LED lighting. In addition, the rear façade has been completely replaced. His plans include removing the old awning over the sidewalks on two sides of the building, residing the structure and putting in new windows. The sidewalk will be replaced with a stamped concrete walkway.

On the inside he’s added a couple stores within a store by creating new, attractive fronts, has engaged artists to come on a regular basis to create paintings as visitors roam around, and has added the Madison Avenue Candy Company that serves ice cream and makes salt-water taffy, popcorn, fudge, caramel corn and other tasty treats. The Log Cabin Room has been completely redone with a new floor, ceiling and lighting. The Claire Lindsey Boutique is the featured clothing outlet at the front of the building.

“I want to make this a viable working mall and get away from the flea market connotation,” Lengacher said. “The stairs to the second floor will be ripped out and an elevator will be installed. A new vendor will be moving into the ‘Jailhouse’ room where a shoe store used to be. And, Congressman Souder’s office will be turned into retail space. To make the Shoppes more comfortable for shoppers we’ve converted all the lighting to LED and insulated the attic and crawl space.”

But that’s not all. Lengacher is shooting for holding an outdoor food court four days this spring and summer in the back of the Shoppes next to Common Grounds Coffeehouse, which he also owns. He is hoping to have daily 20- to 30-minute horse and buggy rides from the Shoppes west on Grabill Road to Grabill Country Sales and back. Tourists will have the choice of riding in an Amish covered buggy or a white carriage. Another venture to attract visitors to Grabill is a petting zoo that will also demonstrate life on an Amish farm.

Even before purchasing the Shoppes, Lengacher was heavily invested in the community. He owns Grabill Country Sales, which his son Elmer Jr. runs; the Woodhouse Restaurant that is managed by his son-in-law Marvin Schmucker; is part owner of Save-a-Lot grocery, which is operated by his wife, Katie; and owns the three properties across from the Shoppes on Grabill Road. He and his son recently began supplying more than 4,000 doughnuts a day to 200 gas stations in Northeast Indiana and Northwest Ohio with a fleet of six vans. They also deliver sandwiches and ice.

Lengacher said the Shoppes is a sideline. “My real job is manufacturing store displays and fixtures for Bass Pro, Pink, White Barn, Bath & Body and Victoria’s Secret,” he said. Twenty-two area Amish vendors assemble and finish the displays, which are then shipped across the country.

Even his home at the corner of Schwartz and Witmer roads is a business beehive. Here, his three daughters run Katie’s Kountry Korner which supplies materials for making quilts and Amish clothing, glassware, gifts and furniture produced by son-in-law Christy Schmucker of Riverside Woodworking.

“Grabill is at the heart of Amish Country,” Lengacher said. “It was founded in 1906 by Joseph Grabill and my goal is to preserve that heritage.”

He added, “It’s ironic that 26 years ago I worked at The Country Shoppes as a maintenance man.”