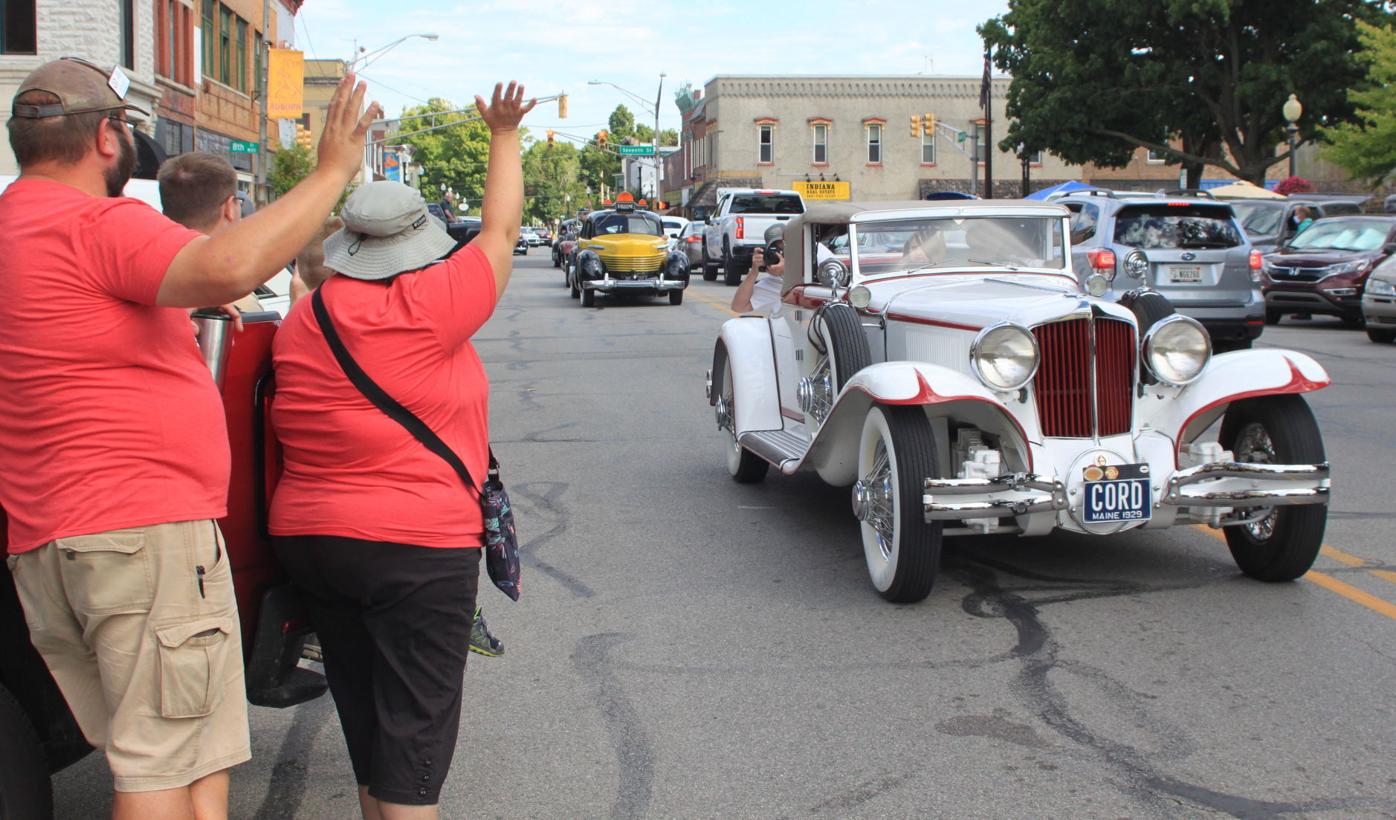 The Leahy family of Churubusco waves as an unofficial version of the Parade of Classics rolls through downtown Auburn the morning of Sept. 5. Second in line is a 1936 Cord driven by their relative, Pat Leahy of Woodburn. The car was reconfigured as a taxi for the 1994 film “The Shadow” starring Alec Baldwin. 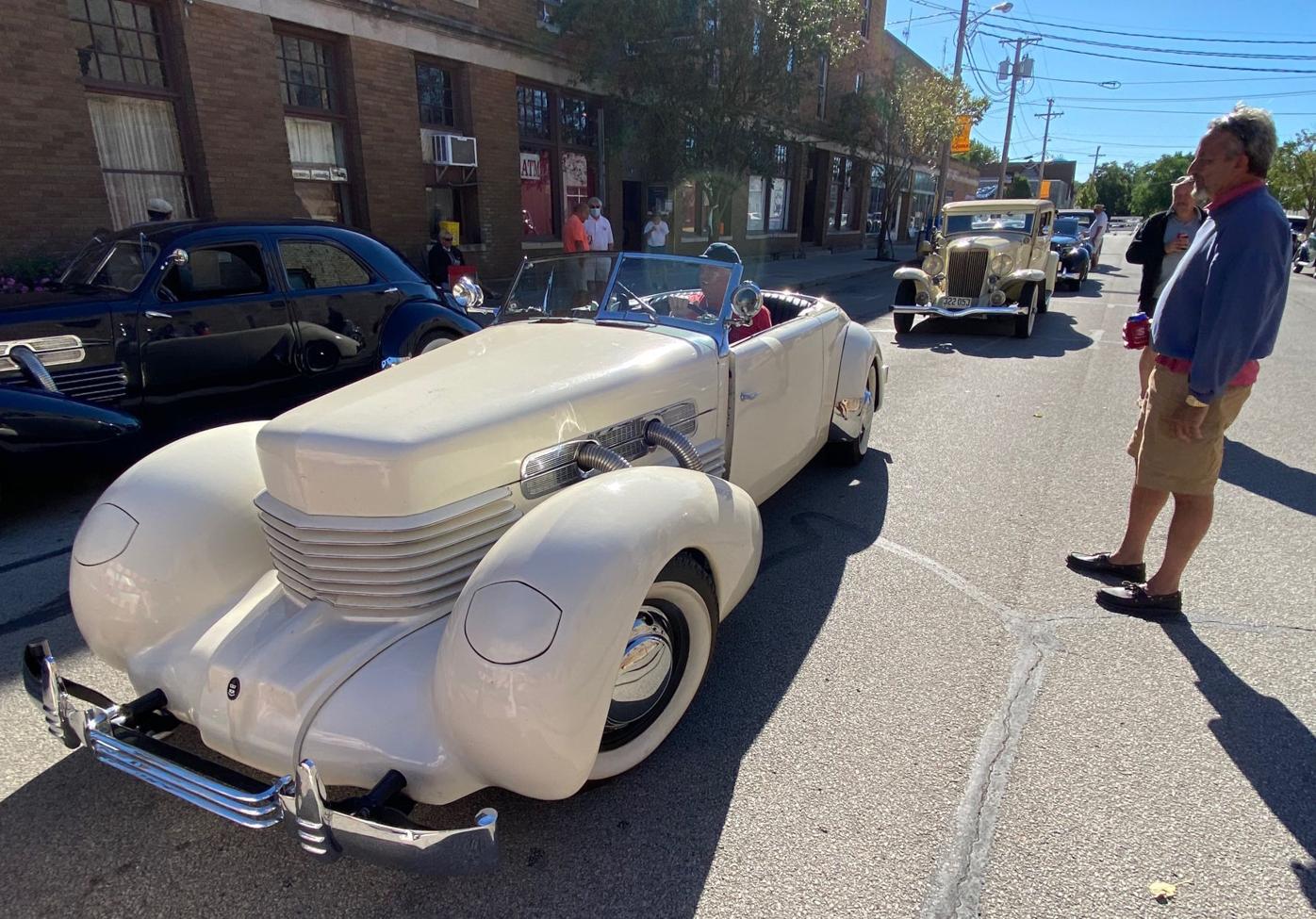 The Leahy family of Churubusco waves as an unofficial version of the Parade of Classics rolls through downtown Auburn the morning of Sept. 5. Second in line is a 1936 Cord driven by their relative, Pat Leahy of Woodburn. The car was reconfigured as a taxi for the 1994 film “The Shadow” starring Alec Baldwin.

AUBURN — Bill Dreist has not missed an Auburn Cord Duesenberg Festival since it debuted in 1956.

So when this year’s official event was canceled due to the COVID-19 pandemic, Dreist decided he would come to Auburn for Labor Day weekend, anyway.

“I came because of the people that I knew would show up here,” he said of other classic car enthusiasts. “It’s become a habit when I’ve been coming since 1956.”

That also was the year Dreist joined the Auburn Cord Duesenberg Club and traveled to its first annual reunion in Auburn. In years past, he attended the festival with a classic Auburn Automobile Co. car. Currently, he owns a Duesenberg and two Cords.

This year, Dreist did not make the journey to Auburn with one of his classic cars. Instead he brought his GMC motor home, which he is using for accommodations. Accompanying Dreist are his wife, Liz, who has been attending the festival since 1965, and his daughter.

Dreist said this weekend’s unofficial gathering of ACD enthusiasts and their automobiles is the first car show he has attended all summer.

When other events were canceled due to COVID-19, Dreist said, he decided to make the most of it.

Roger Obecny of Tinley Park, Illinois, has been coming to the festival for about 10 years. He arrived in Auburn with his 1963 Buick Electra.

“I got tired of having nothing to do,” he said of his decision to travel to Auburn despite the festival being cancelled.

While in Auburn, Obecny always stays at the historic Auburn Hotel, and this year is no different.

Asked what makes the hotel special, he quipped, “The ambiance.”

Despite the cancellation of official festival events, an unofficial parade took place Sept. 5 along the traditional Parade of Classics route on Jackson Street to Second Street to Main Street. Owners brought 28 classic cars from the 1920s and ’30s.

The Butler family, with deep roots in Auburn’s automotive history, contributed six cars to the parade.

The family “decided we going to have a parade, if it’s just us,” said Steve Butler of Fort Wayne.

He drove his latest acquisition, a 1926 Auburn Model 666 that was rescued from a barn in southern Michigan.

“The differential broke in 1963, and they parked it,” he said of the car’s previous owners.

After he purchased the car last winter, Butler nursed it back to health, dislodging walnut shells and mouse droppings from the engine. Now, he said, “It actually starts and runs better than all my other cars.”

With its interior surprisingly intact, Butler said he plans to leave the 1926 Auburn in its original, unrestored condition.

—Dave Kurtz contributed to this report