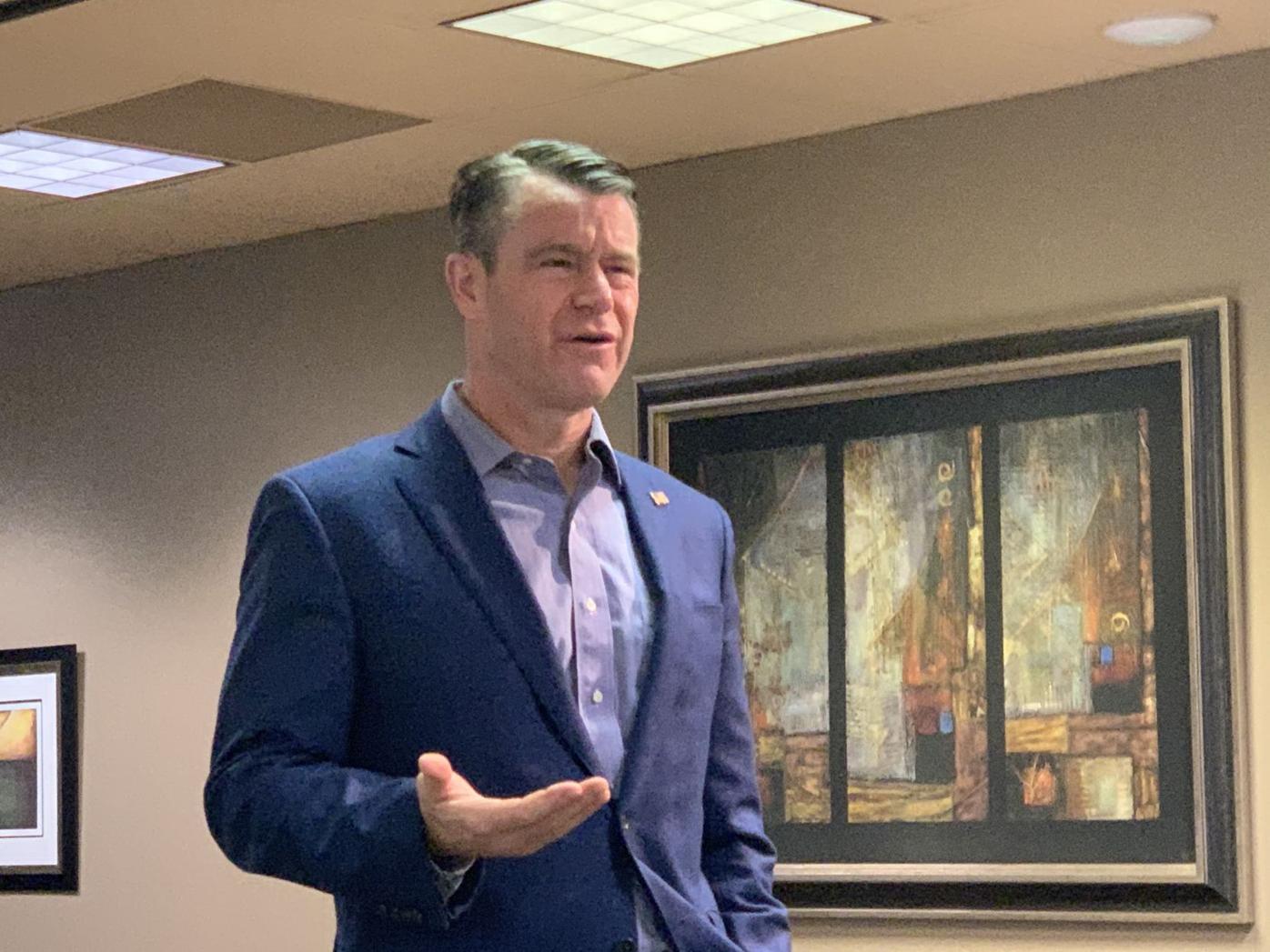 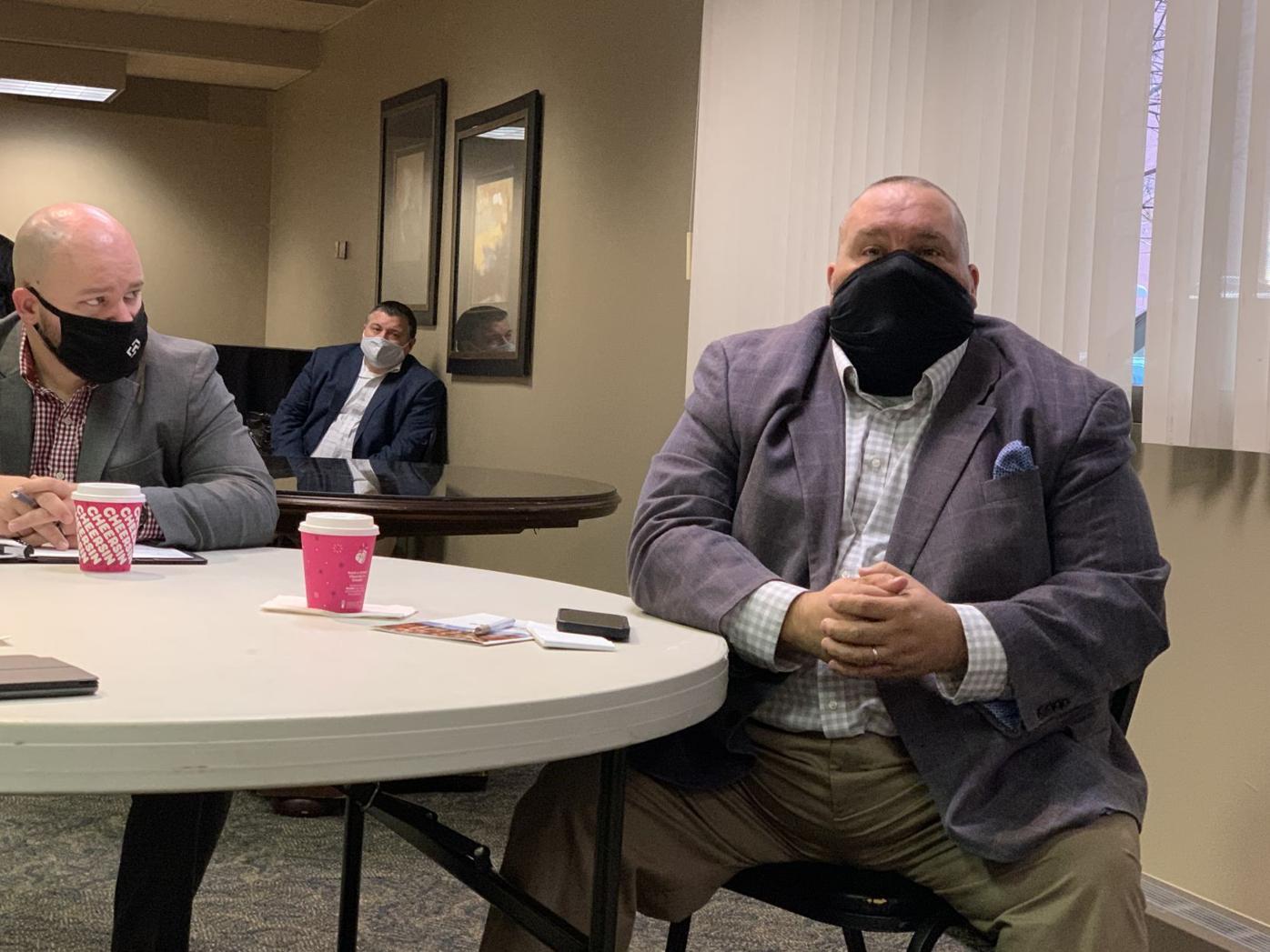 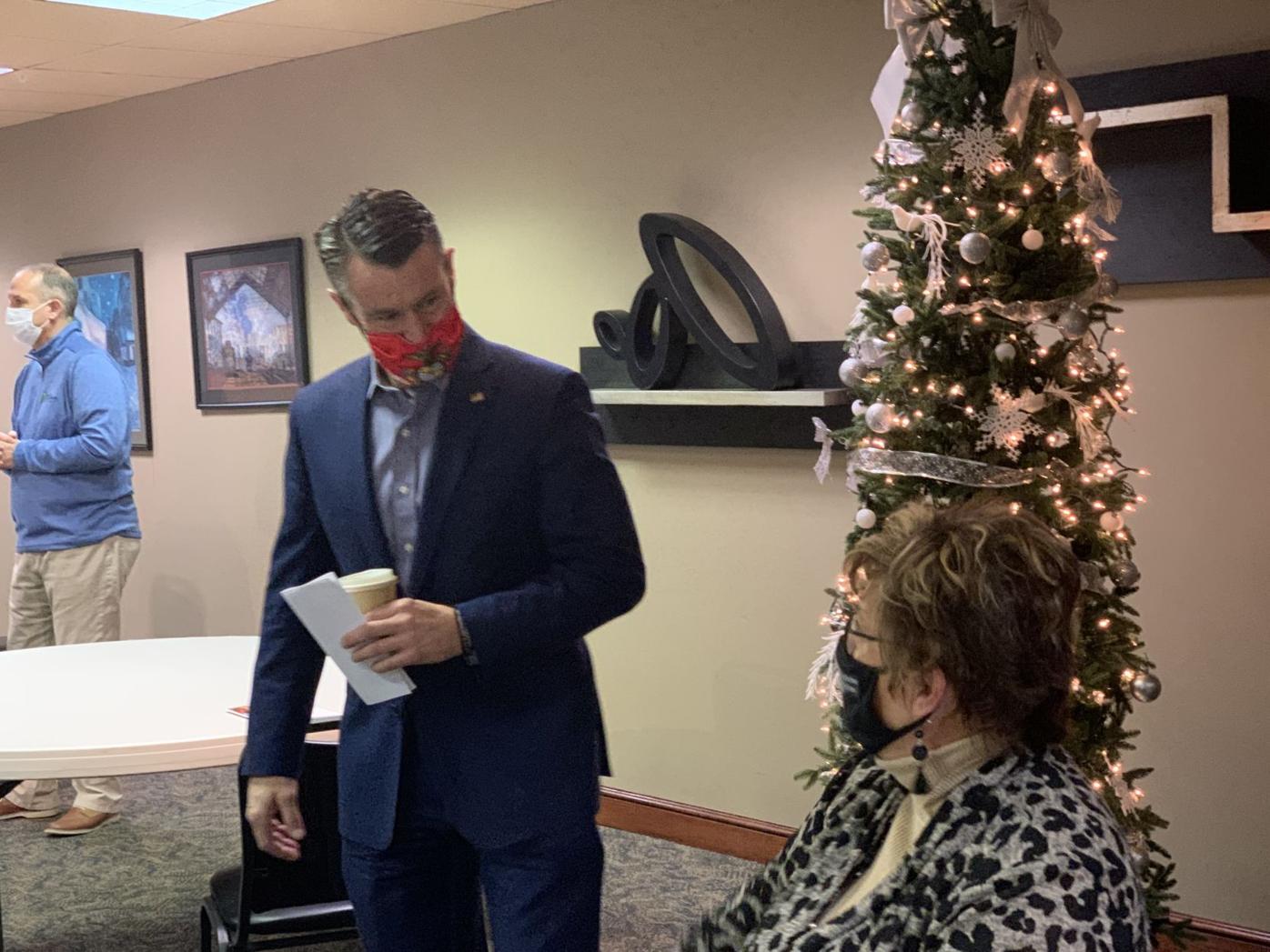 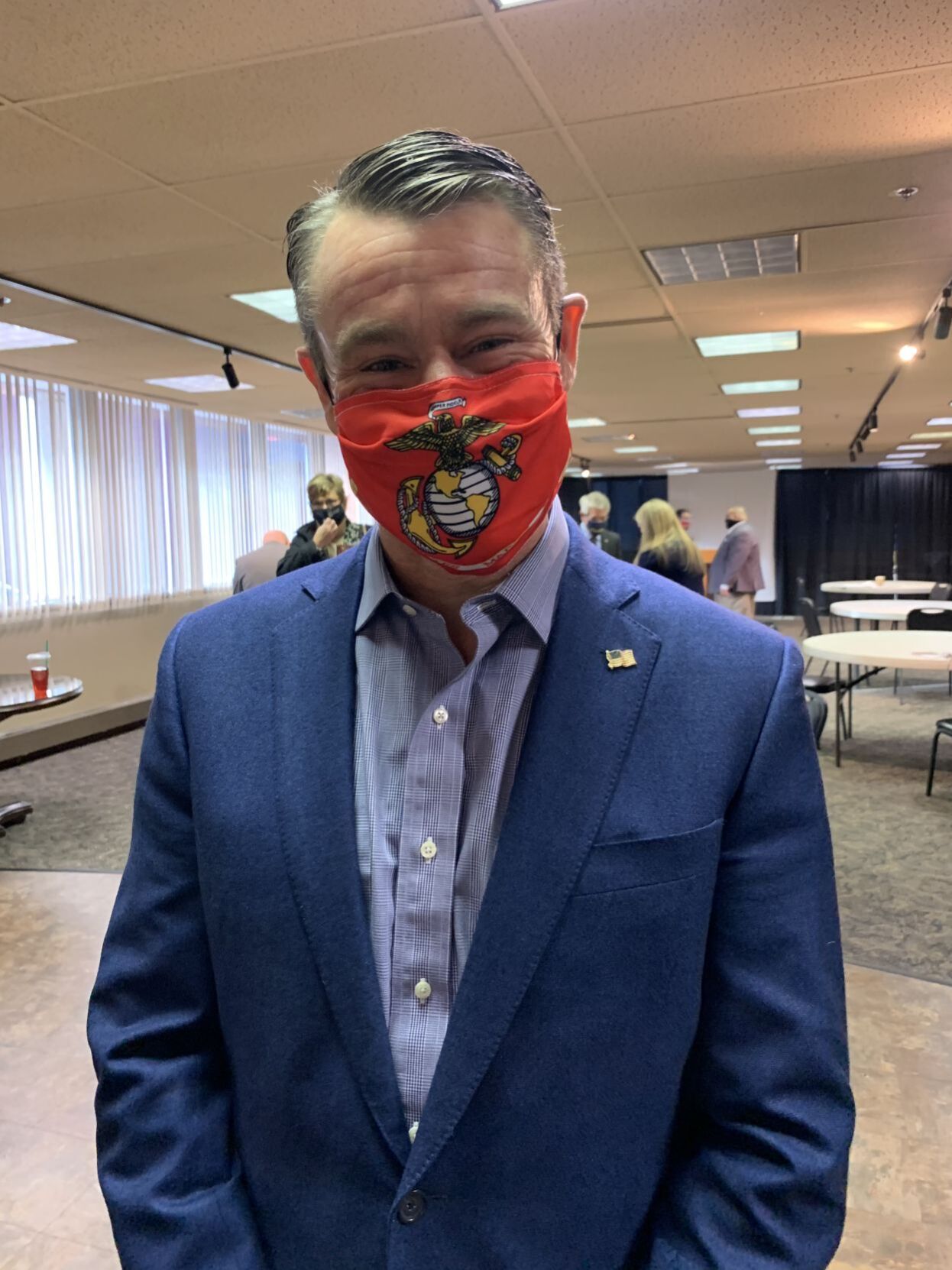 U.S. Sen. Todd Young, who had a commission in the U.S. Marine Corps, sports the military branch’s logo on his mask.

The Dec. 25 target is a possibility. According to media reports, Democratic House Speaker Nancy Pelosi sounded optimistic Dec. 4 and that she and Republican Senate Majority Leader Mitch McConnell were on the same wavelength to an agreement.

Those in attendance were:

• Gary Gatman, executive director of Noble County Development Corp., who is a small-business owner with his wife.

• Rob Parker, president and CEO of the Kosciukso Chamber of Commerce and executive director of Community Development Corp.

Legislators don’t want to continue to add to the nation’s debt but “we do want to respond,” he said. “I think the most fiscally irresponsible thing we could do is fail to assist our businesses, particularly the hardest hit businesses.”

Not only direct assistance such as the Paycheck Protection Plan-type is needed and his ReStart Act, bipartisan legislation for a new loan program to help small- and medium-sized businesses get liquidity with loan forgiveness on a sliding scale based on revenue loss, but also childcare assistance, opening schools safely during the pandemic and ensuring broadband internet is available, said Young, who sits on the U.S. Committee on Small Business & Entrepreneurship.

Hundreds of thousands of businesses nationwide have gone out of business because of COVID-19 and Young expects that to continue, especially in the hospitality and retail industries without much-needed assistance.

As of press time, a proposed $908 billion aid package still remained in limbo with Democrats wanting $150 billion for state and local governments, which Republicans opposed, and Democrats fighting against a GOP proposal to ban coronavirus-related lawsuits against corporations.

Young doesn’t want to see a holdup as the pandemic rages and deaths continue to rise in the nation. “I remain open to compromise, but let’s not take a long time,” he said.

The regional chamber has found that the 26 school schools in the area struggled with distance learning because of the lack of broadband in many areas. Konyha asked that Young make sure that any infrastructure bill include money for expanding broadband, with Young calling increasing internet speed as “priority No. 1.”

“The digital divide is a real thing in this country, especially in low-income urban areas, in many of our rural communities; there are unserved areas in the state of Indiana when it comes to broadband, and we need to help address that,” he said.

Both the regional and state chambers have set high-speed broadband as legislative priorities. Young pledged his help on the federal level for the FCC to accurately map the underserved areas and is working on legislation to get the work funded.

Gatman of the Noble County Development Corp. that said while PPP loans and other programs helped small businesses with immediate cash relief, they need help to create websites to continue being profitable after the pandemic.

“If we keep the doors open for a few months but they’re not in a technology position in order to be able to compete in the new world, and a lot of our small business are underteched, they aren’t e-commercing, they aren’t involved in any kind of significant web or social media digital presence, so as I look at the kind of relief that a lot of our small businesses need, they need help keeping the doors open but on the back side of this, when things get back to normal, many of them are going to perish if they haven’t evolved into the new world of commerce.”

As the region looks to attract 1 million residents to provide an influx of workers to offset the retiring baby boomers, communities find themselves struggling to provide enough housing for these new potential workers, John Sampson of the Regional Partnership said.

“They got people that want to live in the communities in which they work and they can’t find adequate housing,” he said.

When tax rates were lowered, the low-income tax credit became less valuable, and much-needed housing stock isn’t keeping up. He hopes by year-end to make the tax credit “more generous.” He’d like to see prefab housing in federal plans, with Indiana being a major manufacturer, and therefore, a beneficiary.

Turning U.S. 30 into a freeway to move goods through the 11 counties in the region, which has the highest concentration of manufacturing in the country, is another priority, Sampson said.

Young sees the U.S. 30 conversion as a priority as he works with the state on infrastructure.

He’s getting ready to submit an application to the National Science Foundation to get the region considered for a tech hub, which might be advanced manufacturing, advanced biology or robotics.