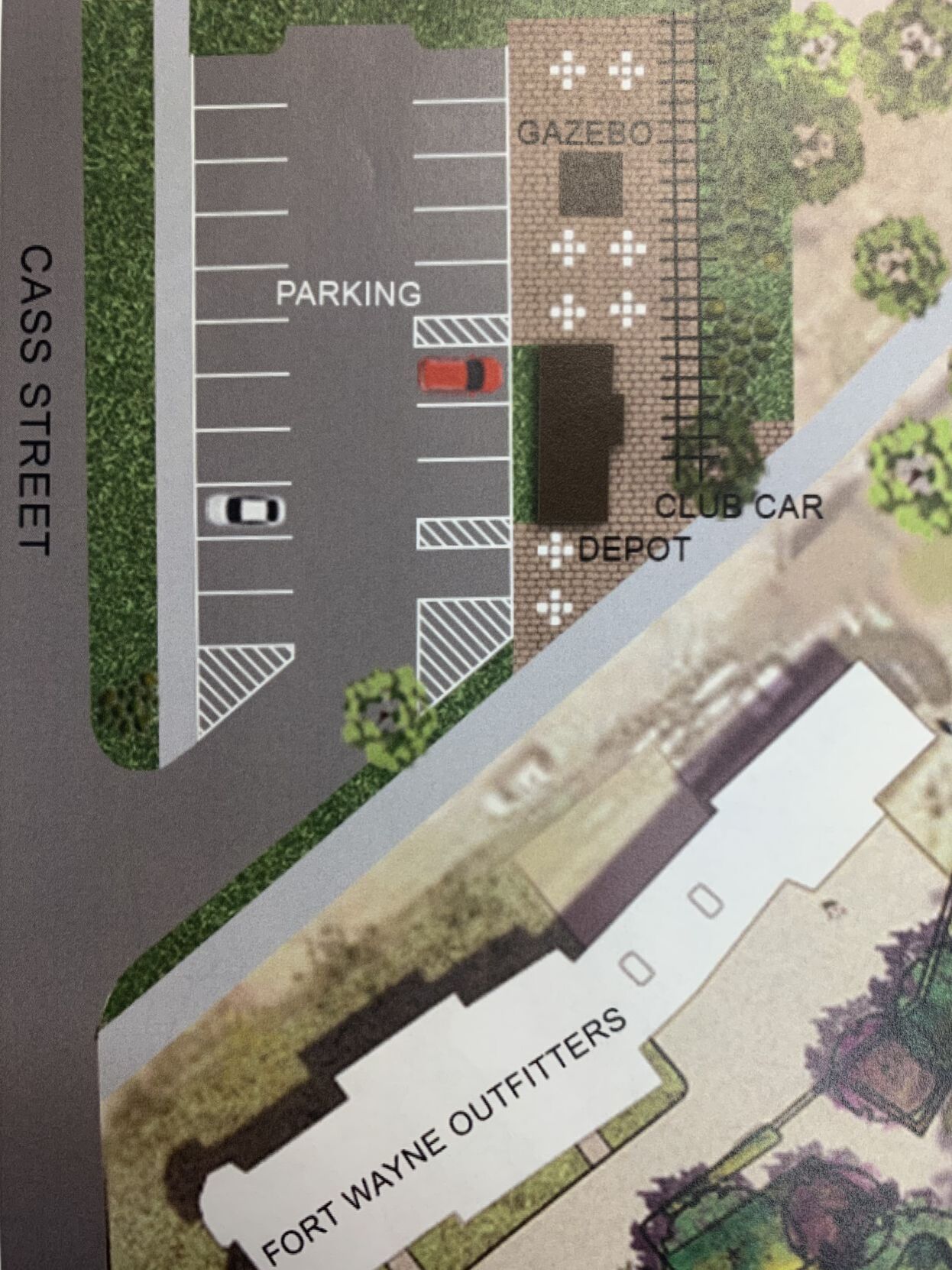 This image from Design Collaborative shows the location of the planned first phase of Headwaters Junction, a rail yard, on Cass Street in Fort Wayne. 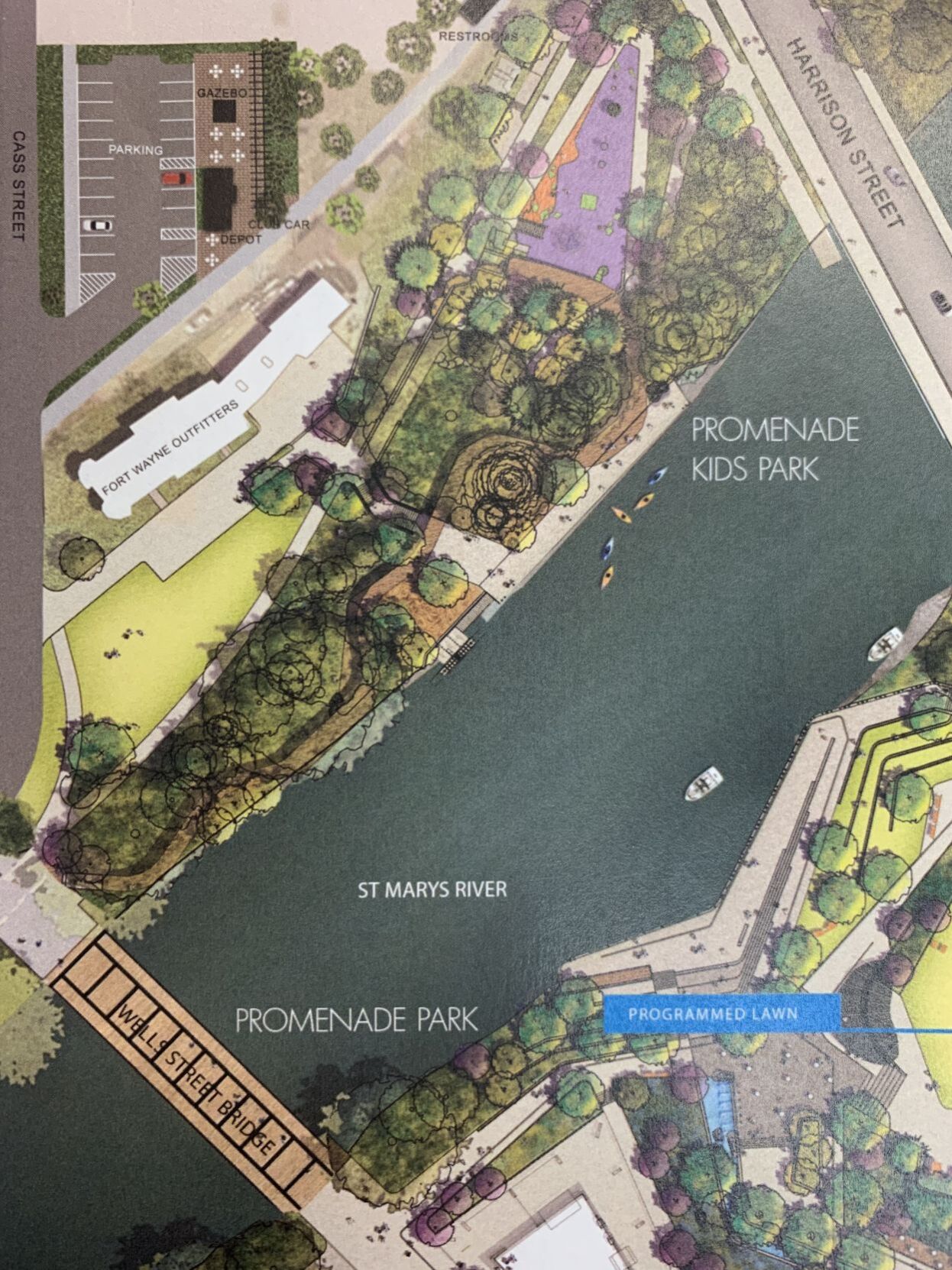 This concept drawing by Design Collaborative shows the Headwaters Junction rail yard in the upper left corner in relation to Promenade Park along the St. Marys River.

This image from Design Collaborative shows the location of the planned first phase of Headwaters Junction, a rail yard, on Cass Street in Fort Wayne.

This concept drawing by Design Collaborative shows the Headwaters Junction rail yard in the upper left corner in relation to Promenade Park along the St. Marys River.

Don Steininger, president of Headwaters Junction, said he planned to file Oct. 19 with Fort Wayne’s Department of Planning Services for the railroad-themed attraction that will be north of Promenade Park in Fort Wayne.

The project at 1010 Cass St., on property currently owned by Tim Hall of the neighboring Fort Wayne Outfitters and Hall’s Restaurants, will include a depot, gazebo, club car on railroad tracks and 18-spot parking lot. The club car, is a restored vintage passenger car that will be available for private parties and events.

According to Kelly Lynch, Headwaters Junction’s executive director and vice president of the Fort Wayne Railroad Historical Society, “the property north of Outfitters is to offer amenities that will benefit Promenade Park with a small coffee and ice cream shop inside the depot, and establish a ‘beach head’ for Headwaters Junction in Rivefront in a visible location while we work on acquiring property and railroad for the larger, future phases of Headwaters Junction.”

Steininger described this as Phase 1 of what will be a many-years-long project.

The remaining amount will be raised from community donations.

Plans for Headwaters Junction have been in the works for about 5 years and were seen as a potential catalyst for riverfront development. They call for a roundhouse, trolley and railway to provide train rides, with a $15 million total price tag.

However, while the project had community support it didn’t move forward.

“The city has always supported the project, but in order to move forward, we needed to agree on a location and strategy for the entire plan that doesn’t compete with other plans or private uses that are also in the mix,” Lynch said.

The nonprofit group agreed in July to transfer the purchase agreement for its location at Putnam and Calhoun streets to the Fort Wayne Redevelopment Commission.

The city and the group now have a “shared vision,” Lynch said.

The attraction would have tourism, economic development and quality-of-life benefits, he previously told Business Weekly, which matches the city’s goals.

This first of three planned phases will be the railyard park. It will take about two years for completion, Steininger said. Costs include $70,000 for land acquisition, $300,000 for land improvements, and $250,000 each for the depot and club car.

Phase 2 will be a roundhouse, a sort of “interpretive center” that would include a mixed-use venue for events such as weddings. Another part of the roundhouse would be the historic preservation area, to be home to the locomotives and passenger cars that the group owns and operates. These include the restored-to-operation Nickel Plate Road 765 steam locomotive built in 1944.

Phase 3 would be the tourist railroad that would allow the group to operate a variety of programs and events, including its Santa train, that’s a sell-out each time, but could include a fireworks train and a dinner train.

“We won’t be ready to announce the approved nearby location until we’re a little further along in negotiations,“ Lynch said, “which is what makes the station and passenger car display an important display of progress. The tip of the iceberg.”