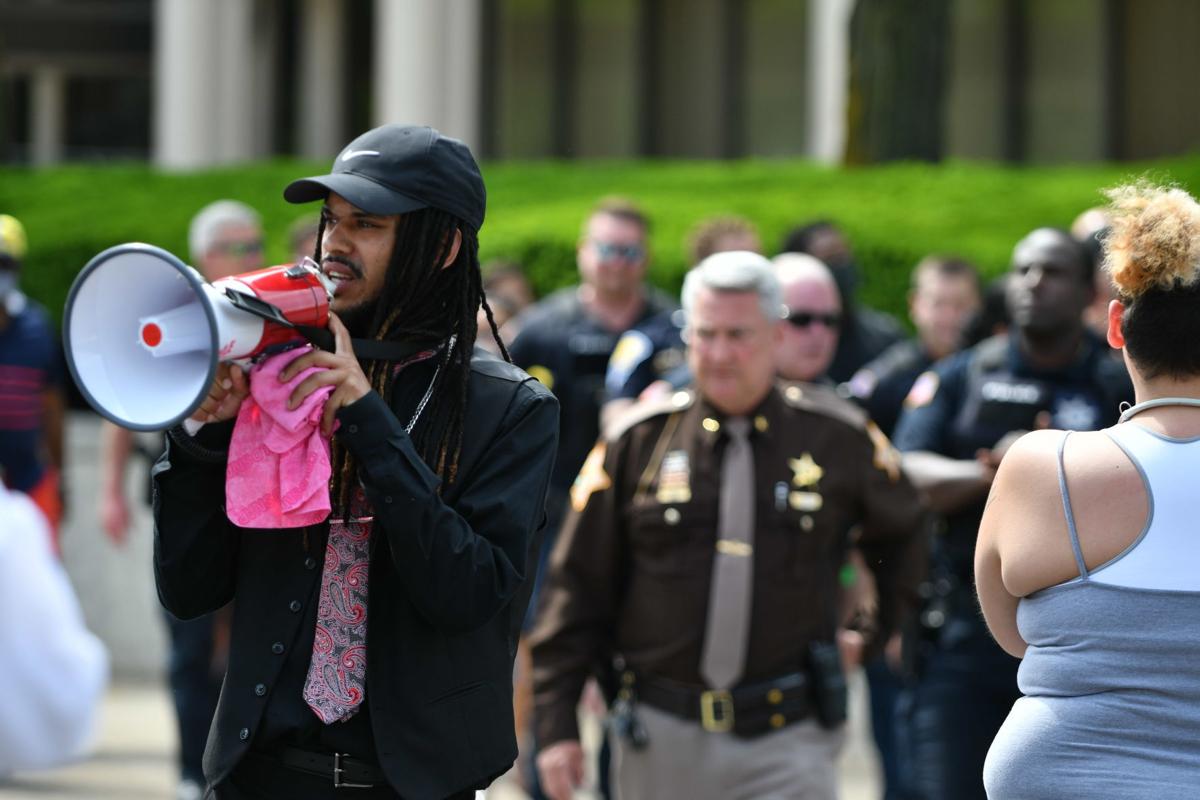 Relando Rencher, one of the organizers of a June 4 Unity March that included Fort Wayne Police Department officers and the mayor, asks protesters to remain peaceful. Allen County Sheriff David Gladieux can be seen in the background. The march was meant to show solidarity with protesters, who, like others nationwide, are seeking to end systematic racism at the hands of police. Violent protests in May have resulted in a lawsuit against the city of Fort Wayne and Gladieux by three protesters.

Three protesters represented by the American Civil Liberties Union have filed a federal lawsuit against the city of Fort Wayne and the Allen County sheriff over the use of tear gas by police against demonstrators in May in downtown Fort Wayne. They allege that they fear police tactics if they exercise their constitutional rights.

Allen County residents Taylor Raymond Crane, Kendall Dimond and Matt Carmer are listed as plaintiffs in the lawsuit filed June 26 in the U.S. District Court’s Northern District of Indiana in Fort Wayne. Each says he or she was the victim of tear gas used by police during demonstrations at Courthouse Green in front of the Allen County Courthouse and/or the Martin Luther King Jr. Memorial Bridge. The lawsuit lists as defendants the city and Sheriff David Gladieux, although not the latter by name. Gladieux said at a news conference the morning after the first demonstration that he had about 40 deputies working at the protests.

The defendants request a jury trial and damages, saying that police used tactics to prevent them from protesting.

Emails were sent to the mayor’s office and city and county police agencies listed in the lawsuit to request a comment. Sgt. Sofia Rosales-Scatena, city police spokeswoman, said she could not comment on the lawsuit. City spokesman John Perlich said the city does not comment on pending litigation.

“Peaceful protesters have repeatedly been met by members of the Fort Wayne Police Department and the Allen County Sheriff’s Department who have engaged in a range of unreasonable and inappropriate behaviors designed to prevent the persons from engaging in lawful protest,” according to the lawsuit.

The First Amendment protects peaceful, not violent, assembly. The FWPD has previously told Business Weekly that some protesters refused to get out of Clinton Street, a major north-south artery through downtown Fort Wayne, on May 29, the first day of protests related to the death of George Floyd in Minneapolis. Floyd, a black man, died May 25 after police officers were seen in video kneeling on his neck, and he told them he couldn’t breathe. The protests, which have taken place worldwide, are demonstrations “against systemic racism and the manner in which systemic racism has negatively influenced police actions towards persons and communities of color,” according to the lawsuit.

Some among the Fort Wayne group also broke windows of downtown businesses, according to police.

A special police team that deals in crowd control was assembled after demonstrators refused to obey orders, police previously said, and officers used tear gas against the crowd May 29 and 30.

The lawsuit cites the use of “tear gas, pepper spray, flash grenades, and rubber bullets and other policing tactics designed to remove peaceful protesters from public spaces. This behavior by law enforcement violated, and continues to violate, both the First and Fourth Amendments to the United States Constitution.”

• Sheriff’s deputies pushed protesters out of the public area.

• On May 30, when some protesters again went into the street, police announced that protesters had to leave the public space, but few protesters were able to hear the order. Seconds later, “Fort Wayne Police Department officers fired tear gas indiscriminately towards persons in the Courthouse Green and on the public sidewalks.”

• Officers at the Martin Luther King Jr. Memorial Bridge “blocked protesters from leaving the bridge in either direction” and then shot tear gas at them.

• June 14, “Police pursued the demonstrators, even after they left the street, shooting rubber bullets at ... them. ... police went into private businesses and dragged out protesters who were just trying to get away from rubber bullets.”

• June 15 city “officers started arresting persons without stating any charges and without reading them their rights. Weapons were pointed at other persons and they were threatened with arrest.”