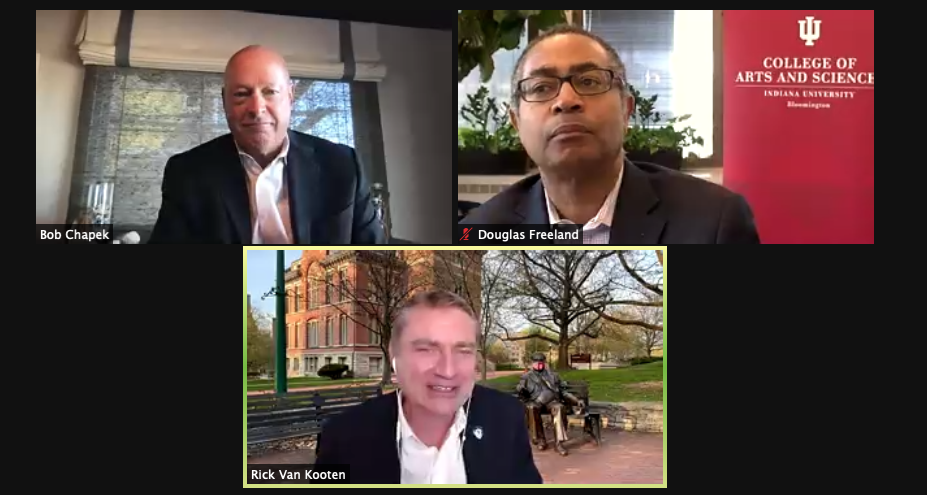 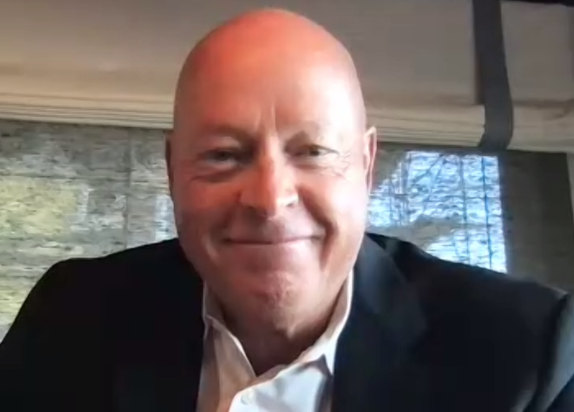 Bob Chapek, a 1981 Indiana University Bloomington graduate, came onboard as CEO of Disney just as the COVID-19 pandemic struck. He has had to guide the company through closed amusements parks while putting more focus onto the home entertainment division.

Bob Chapek, a 1981 Indiana University Bloomington graduate, came onboard as CEO of Disney just as the COVID-19 pandemic struck. He has had to guide the company through closed amusements parks while putting more focus onto the home entertainment division.

Indiana University on Feb. 19 presented the webinar “Celebrating College Alumni Contributions: A Conversation with Bob Chapek, B.S. ’81, CEO, The Disney Company” in which Chapek discussed new technology, his leadership during the pandemic and diversity in the company’s characters.

Chapek, 60, a Hammond native, graduated from IU Bloomington with a degree in microbiology. He became Disney’s seventh CEO on Feb. 25, 2020, just as COVID-19 was starting to take hold in the U.S. Three days after he took the job, he decided to close 80% of the company’s businesses, other than its TV networks. “I was involved in a job of making sure that the company, frankly, survived,” he said.

He started his career with Disney in 1993 in the home entertainment division and later served as president of Walt Disney Studios. The company owns numerous brands, including “Star Wars,” Marvel, ESPN and National Geographic and has 200,000 employees, known as “cast members.” In 2019, it had about 11 movies that did $1 billion at the box office, but the pandemic was the catalyst that moved the company faster toward streaming services.

Chapek previously worked as chairman of both Disney parks, experiences and products and its parks and resorts, overseeing the domestic and international parks, the cruise line, and more. He was in charge of seeing the “Star Wars: Galaxy’s Edge” come to fruition at resorts in California and Florida.

About 300 students were among the 1,700 registered webinar participants. The event drew nearly 200 presubmitted questions about leadership, diversity, inclusion, COVID-19 and Chapek’s time at IU.

“‘The Region’ (where you grew up) has a reputation for being a no-nonsense tough environment,” moderator Douglas Freeland, an IU grad who worked in marketing for McDonald’s and is a member of the College of Arts and Sciences executive dean’s advisory board, asked Chapek. “Describe what it was like growing up there.”

“You get what you earn in ‘the Region’ and you don’t expect anything beyond what it is that you work hard for,” Chapek said.

He learned his work ethic from his parents as they built a post-World War II life for Chapek and his sister.

While changing jobs frequently during his nearly 30 years at Disney, he found mentors. “Most recently I would have to say it’s Bob Iger,” who preceded Chapek in the CEO role that he had since 2005 and now serves as executive chairman of the board.

The two worked closely together over seven years as they flew back and forth to Shanghai before the opening of the Disneyland Park there.

Chapek transitioned from working in environmental science at Amoco chemical and oil company in Chicago into packaging for a pharmaceutical company after earning an MBA. The leap to Disney came through his experience with packaging goods when Disney was putting its films on VHS.

Disney’s broad base of companies makes it possible for both creative and technical people to find a niche.

“Maybe if you work in a logistics company you can be the very best logistics person and rise to the top,” Chapek said. “But in a company as broad as Disney,... knowing that your core product isn’t something that’s developed in a lab but it’s developed in the conceit of somebody’s brain, means that your product development team are human beings that literally conceive of everything.”

Having a liberal arts education prepares someone with that “elasticity” needed for a career, particularly in the creative arts, he said.

Chapek knows that in business, you have to evolve, and has had to walk a tightrope of advancing technology and being a good corporate citizen while appeasing the “superfans” and protecting the legacy of Walt Disney, the man who started the company in 1923.

“We want to be on the front end of the innovation curve,” while adhering to the company’s values, he said.

Chapek said it’s important to have a “North Star” that guides you in your decisions. For the parks and resorts, it’s exceeding guests’ expectations. “Because when the noise comes in and there’s a lot of different signals and inputs, and you have to make a decision, you have to think about what your North Star” is, he said.

DisneyPlus, started 18 months ago, helped the company move from its movie base and being viewed as “an old media company to a new media company,” Chapek said. “...The future is really going to be what the consumer tells us it is. ... We want to skate, though, to where the puck’s going to be, not where the puck is.”

Its brand power will allow it to continue the “Star Wars” and Marvel universes. While Chapek believes Disney still will have a theatrical business, “I don’t think it will ever be quite as robust as it was before people found the wonders of having consumer choice and flexibility in terms of deciding what they want to watch and when they want to watch it and how they want to watch it.”

On the parks front, “Star Wars: Galaxy’s Edge” includes the Rise of the Resistance attractions that features 5 million lines of code to create the immersive interactive experience. “It’s impossible to separate technology from the guest experience, although we believe any technology should be hidden.”

With regards to diversity, Chapek pointed to the social unrest of last year sparked by another Black man’s death while in police custody.

“I think we need to do more bigger, faster and stronger,” he said.

He set up six pillars for the company: transparency, representation, accountability, community, culture and content. “Our content is the biggest way that we have the ability to influence the world around us.”

Disney works with filmmakers who share their experiences and points of view. Disney created the Undefeated out of ESPN that he describes as “the intersection of sports, culture and entertainment.” The company helps diverse filmmakers tell stories. It also has councils to look for diversity in front of and behind the camera. Culturally diverse programs emerge from the scripts to create stories like “Moana” and “Coco.”

The company also made the decision to change some of its attractions that have been in its parks for decades, most notably changing its Splash Mountain log ride from a “Song of the South” theme to the “Princess and the Frog,” which centers on a Black character.

“‘Song of the South’ is based on a story which depicts happy slaves, that is probably not the place we all want to be,” he said.

It involves having the courage to change something enjoyed by guests for almost 60 years.

Of the 5 skills that the College of Arts and Sciences teaches — question critically, think logically, communicate clearly, act creatively and act ethically — Chapek said acting ethically is the most important at Disney.

“Because if that’s broken, then we break the promise of what Disney, as we call it, is about,” Chapek said.

It’s a quality that’s maintained by first hiring people with those characteristics. Not a day goes by that Chapek doesn’t hear someone implore that he should hire the person’s reletative because he or she loves Disney. That quality isn’t enough. “You’ve got to have the right character to work at Disney. You have to have hospitality first. You have to want to serve. You have to want to put others in front of yourself.”

Chapek said one of his most important memories was meeting his wife his second day on campus. During his time at IU, he watched the filming of “Breaking Away” while sitting in the stands with other extras in the Little 500 race scene, and celebrated the 1981 NCAA championship his senior year.