Voices of Unity director and life coach Marshall White talks to students about commitment at one of the choir’s rehearsals. 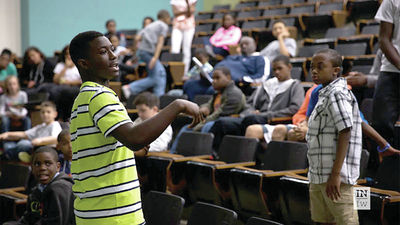 Members of Voices of Unity discuss and debate topics at their meetings. (Ryan Schnurr)

Voices of Unity director and life coach Marshall White talks to students about commitment at one of the choir’s rehearsals.

Members of Voices of Unity discuss and debate topics at their meetings. (Ryan Schnurr)

“What are the enemies of greatness?”

The question hung for a moment over the room of students. Marshall White, CEO and founder of the Unity Performing Arts Foundation, was addressing the members ages 7 to 19 of Voices of Unity, the youth choral arm of the foundation, at rehearsal.

The words began to pepper the air as the young people raised their voices one at a time and offered their answers. According to White, this is just as important as them raising their voices in concert.

“We do a lot of performances, but what makes the performance and music so powerful is the chemistry and seriousness that is developed between the kids,” he said. “That comes from the teaching and principle application that we teach.”

Voices of Unity is one of a number of arts programs that are part of the Unity Performing Arts Foundation, which was initiated in 2000 after three years of development and four prior years of White honing his vision.

What is this vision? In a nutshell, White said it’s to expose kids to professionalism and success at an early age so that they can be equipped for success in life.

“There are a lot of children in our communities who don’t even realize how great they are,” he said. “And simply because they live in communities where people don’t tell them on a daily basis.”

Most of these kids live in underserved or minority neighborhoods, he said. Unity’s programs work to change this.

“It really was an incredible void in the arts community where minorities were not participating in the arts at all. So we did surveys … and we found that most of those kids were saying that the arts program wasn’t relevant to their culture,” he said. “So we created a program that was different and called it the ‘soulful art form,’ which was art that gave way to emotions and expressions and allowed people to experience it.”

The foundation learned what sorts of creative things the kids were already into and used them as a basis from which to create educational programs in dance, creative writing, drama, choral music and others. And it was successful, particularly with Voices of Unity, the choral music program.

White, who also serves as the director and life coach for the choir, said that while the program seeks excellence when it comes to performing and singing, Unity wants to develop the person, not just the talent.

“Our focus is that these kids become successful in every area of life,” he said. “A lot of students come to our program very raw … and they learn how to communicate, how to debate, how to have conversations. And then you top it off with opportunities.”

The choir travels extensively internationally — this summer includes a trip to Riga, Latvia, for the 2014 World Choir Games — and has excelled on a global stage. At the 2010 World Choir Games in Shaoxing, China, Voices of Unity received gold medals in two categories: popular choral music” and gospel and spiritual. Additionally, the choir was crowned world grand champion in the gospel and spiritual category.

“You’ve got to create an environment that challenges kids to dream and see possibilities,” White said. “And when they can dream, they have hope, they have a reason to live. Why are kids killing each other in the streets? Well, when people don’t see a reason to live or a reason to survive, the next step is to kill life.”

This summer, the choir has also received an invitation to perform at the 2014 Choirs of America event at Carnegie Hall in New York City. This prompted Unity to launch the “Gold for the City” campaign, which seeks to help raise funds for these opportunities.

But White added that it’s about much more than just these trips. It’s about investing in youth opportunities and achievement.

“You have gold right here in your community, let’s invest in it,” he encouraged.

Back at the rehearsal space, the discussion continued.

“So,” White asked. “How many great people we got in this room?”

Dozens of hands shot into the air. And with the opportunities and experiences these young people have had, and the work they have put in to get to where they are, it’s certainly not hard to believe.

For more information about Voices of Unity, Unity Performing Arts Foundation or the “Gold for the City” campaign, visit UPAF.com.