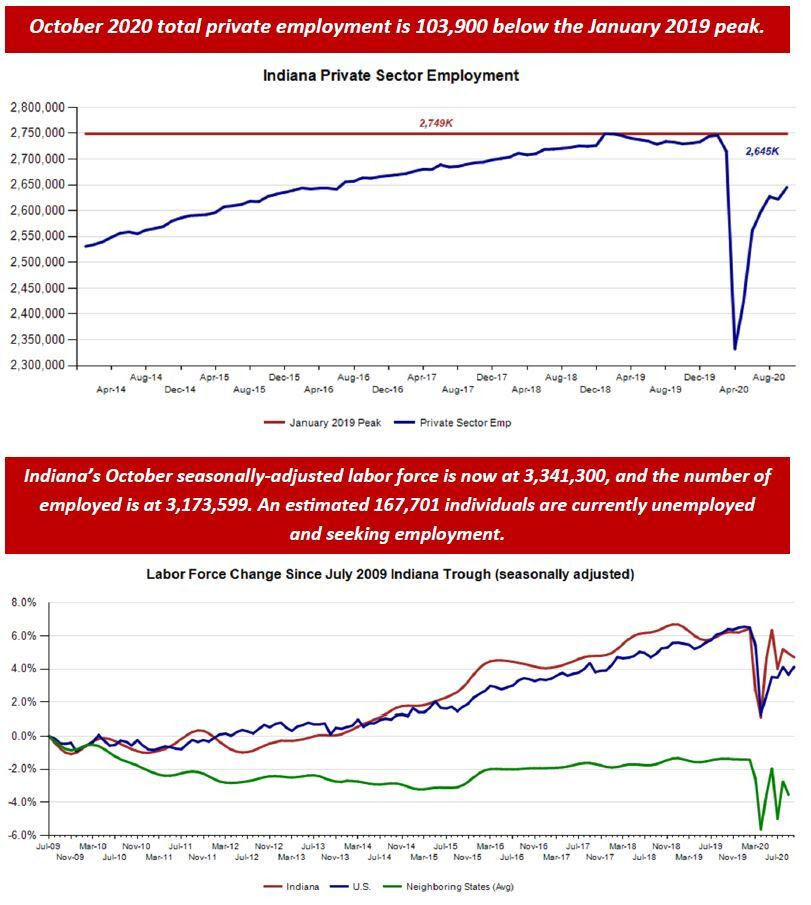 INDIANAPOLIS — Indiana’s unemployment rate dropped to 5.0% in October, well below the national rate of 6.9%, the Indiana Department of Workforce Development reported Friday.

Indiana’s labor force had a net decrease of 7,271 over the previous month. Workforce Development said this was a result of a decrease of 41,803 unemployed residents and an increase of 34,532 employed residents. Indiana's total labor force, which includes both Hoosiers employed and those seeking employment, stands at 3.34 million, and the state’s 63.1% labor force participation rate remains above the national rate of 61.7%.

Indiana was one of 37 states and the District of Columbia that saw their unemployment rates decrease. Neighboring state Illinois saw the largest unemployment rate decreases at -3.6 percentage points. Ohio's drop in its unemployment rate was twice that of Indiana: 5.6% in October from 8.3% in September.

According to the Workforce Development report:

• Private-sector employment has decreased by 83,900 over the year and increased by 23,300 over the previous month. It credited the monthly increase primarily to gains in the trade, transportation and utilities (8,600), the professional and business services (7,400) and the leisure and hospitality (3,600) sectors.

• Gains were offset by a loss in the construction (-900) sector.

In March, the state issued stay-at-home orders for nonessential workers that saw the state jump 14.5 percentage points from 3.0% in March.

The monthly unemployment rate represents the number of unemployed people seeking employment within the previous four weeks as a percentage of the labor force.

However, November's rate could be affected by the current rise in the number of COVID-19 cases and deaths across the country has seen most of Northeast Indiana's counties put into a red zone, the worst rating representing very high spread of the virus. The increase in cases has caused counties, including Allen, to impose restrictions on seating size and hours at bars and restaurants in an effort to halt the spread of the disease. However, some hospitals have already begun postponing unrelated medical procedures as they need staffing for the COVID-19 patients.

Indiana Health Commissioner Dr. Kris Box and other health leaders as well as government officials have cautioned residents to avoid gatherings at the upcoming Thanksgiving holiday in an effort to halt the transmission of the new virus, which could be most dangerous to older residents and those with health problems.

October employment data for Indiana counties, cities and MSAs will be available at noon Monday.