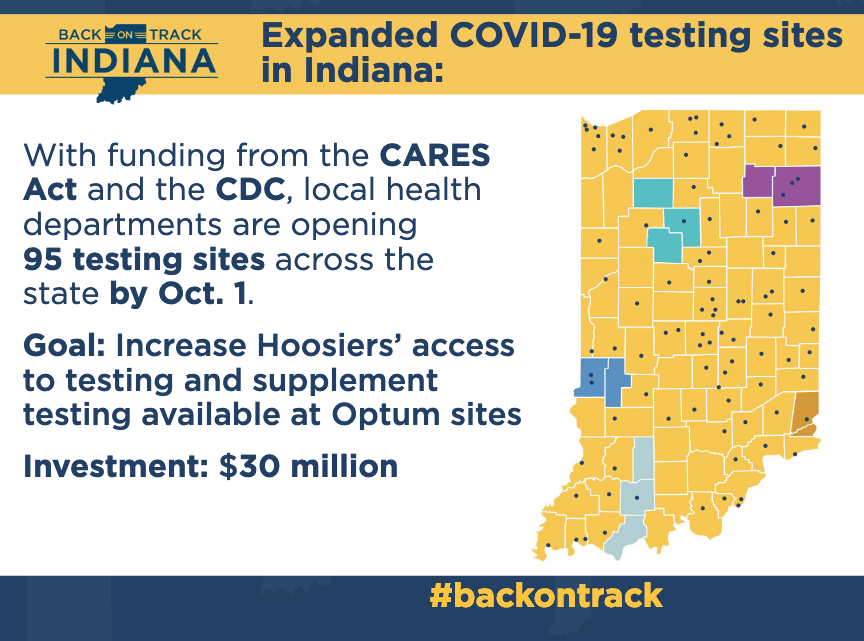 Seventy-six counties across Indiana will be adding new COVID-19 testing sites by the end of the month as the state invests $30 million in CARES Act funds to open 95 new locations for testing. A map from the Indiana State Department of Health indicates that new sites will open in Shipshewana, Angola, Butler and Kendallville, although exact locations haven’t been released. Three sites will open in Allen County. 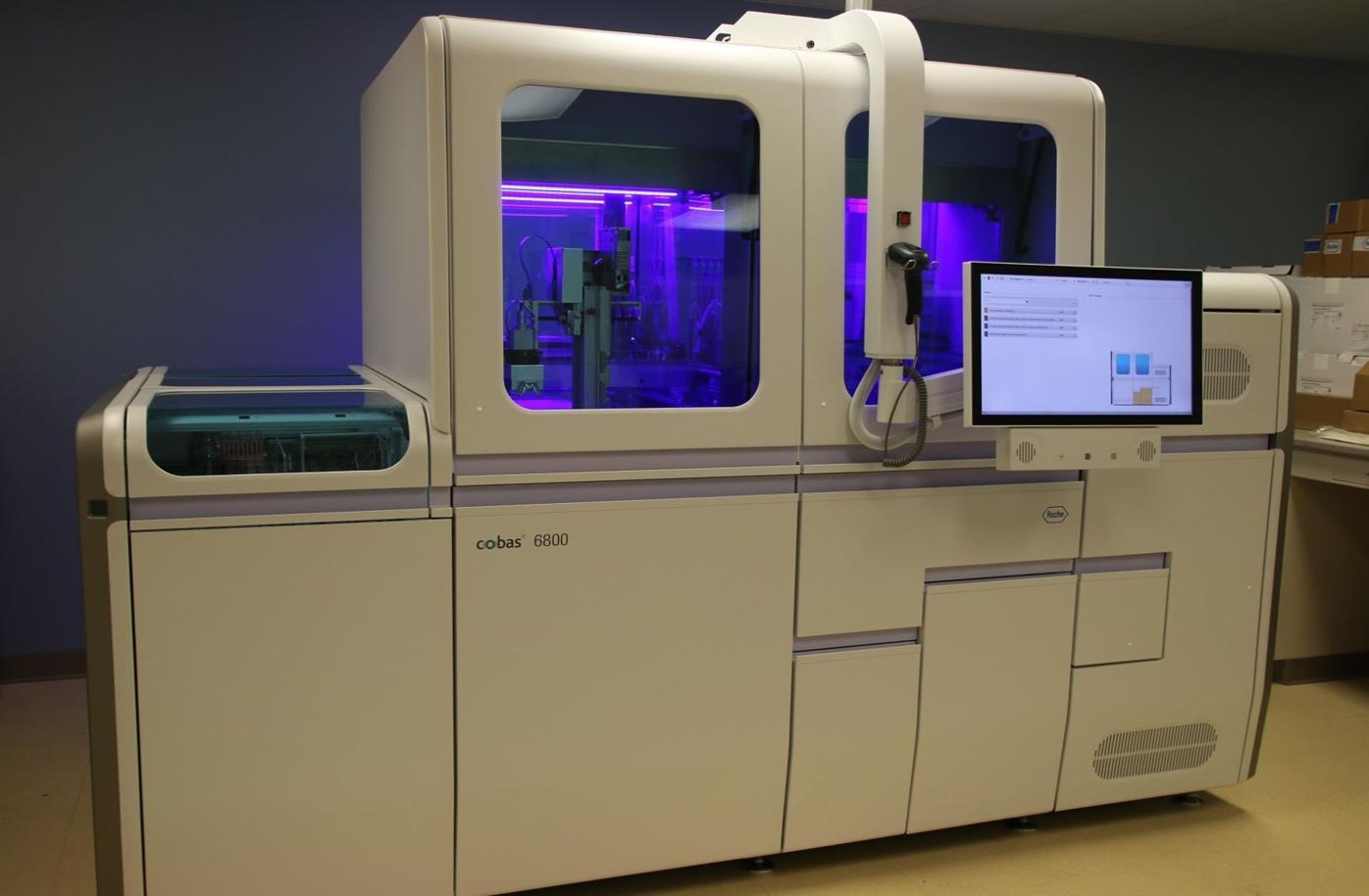 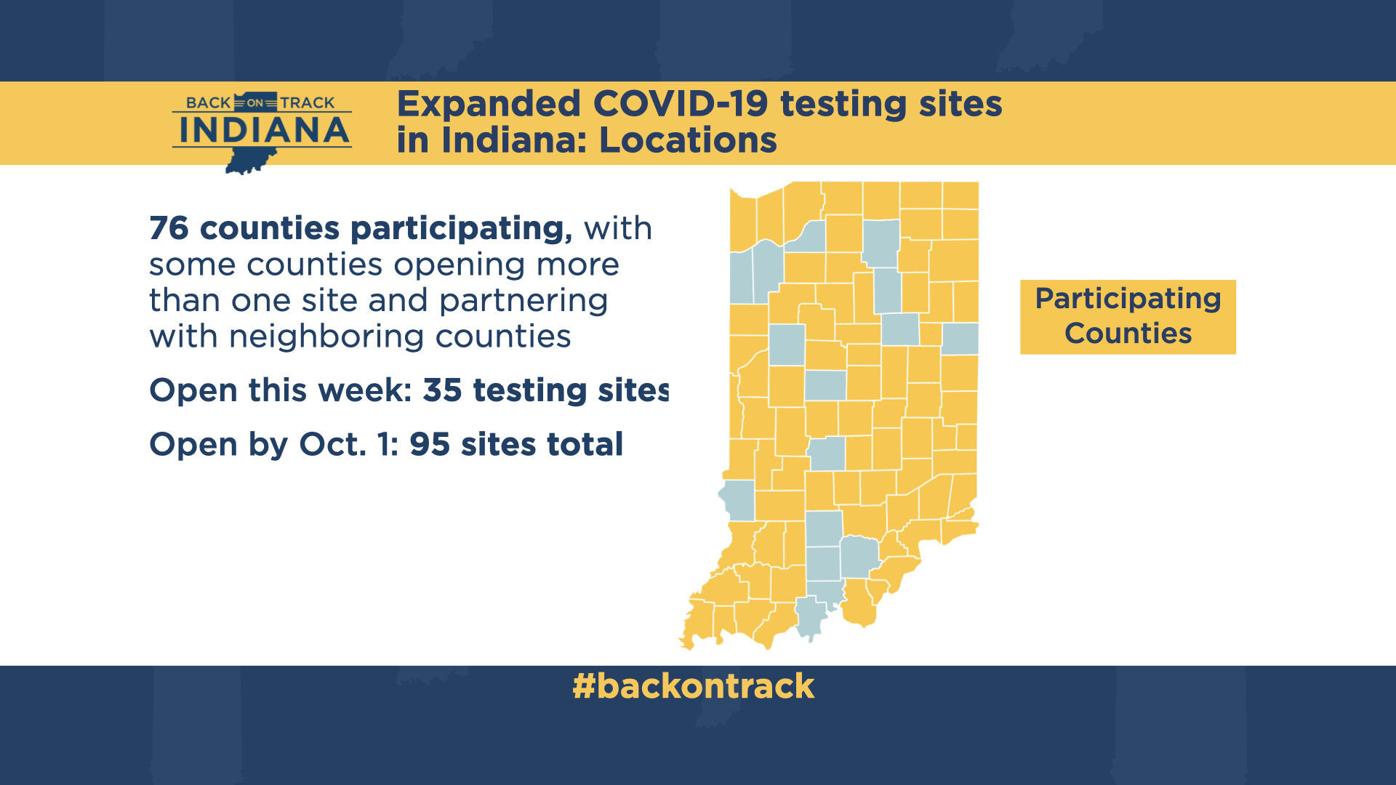 Seventy-six counties across Indiana will be adding new COVID-19 testing sites by the end of the month as the state invests $30 million in CARES Act funds to open 95 new locations for testing.

Seventy-six counties across Indiana will be adding new COVID-19 testing sites by the end of the month as the state invests $30 million in CARES Act funds to open 95 new locations for testing. A map from the Indiana State Department of Health indicates that new sites will open in Shipshewana, Angola, Butler and Kendallville, although exact locations haven’t been released. Three sites will open in Allen County.

Seventy-six counties across Indiana will be adding new COVID-19 testing sites by the end of the month as the state invests $30 million in CARES Act funds to open 95 new locations for testing.

INDIANAPOLIS — With new cases and testing numbers running at all-time highs, Indiana is making another effort to boost its testing levels even higher.

Box said 35 sites should be open by the end of this week, with the rest up and running by the start of October.

Indiana Health District 3, which includes 11 counties in northeast Indiana, is expected to get 11 new testing sites, including three in Allen County.

Each testing site will receive funding to run the centers for up to two years, and each site should be able to administer 100-200 tests per day depending on population density and demand, Box said.

“I’ve been impressed by the willingness to take on this challenge,” Box said.

In May, Indiana made its first step up in testing capacity, contracting with OptumServe to open 50 free testing sites across the state. That effort represented the first major boost in testing capacity, allowing the state to go from testing about 2,000 people per day to more than 7,000 per day in just a few weeks.

In August and so far in September, Indiana has averaged more than 15,000 tests per day.

Box also gave updates on two ongoing projects, including efforts to set up a statewide COVID-19 case dashboard for schools as well as the upcoming third round of a statewide IUPUI Fairbanks School of Public Health testing for its COVID-19 prevalence study.

Box reported the state health department is making progress in communicating with school districts and setting up a reporting pipeline for districts to report the numbers of cases being discovered in their buildings.

Ideally, the state will be able to list COVID-19 cases by individual school and not just by school district, along with demographic information by age, gender and race, as it does on its other dashboards.

Box noted that no individuals would be identified and the state would suppress any figures lower than five, which is consistent with its reporting for COVID-19 and other disease outbreaks. Ages of individual cases would not be listed, but age ranges among aggregate numbers would be made available.

“The purpose is not to stigmatize the school or penalize them,” Box said. “Rather the purpose is to help all of us make the best decisions possible as we navigate this pandemic.”

A schools dashboard is still likely several weeks away from release.

As of now, schools won’t be mandated to report but strongly encouraged to do so, Box said. In the future, if reporting becomes an issue, the state may consider requiring schools to report cases.

Finally, Box indicated that a third round of the Fairbanks study is starting this month.

That study, conducted by researchers at IUPUI, has conducted randomized sampling of Hoosiers around the state for both active infection and antibodies to look for previous infection in an effort to get a better grasp of how many people have been impacted by COVID-19.

In the two previous rounds earlier this year, the study showed that only about 3% of Hoosiers likely had been infected and that approximately 45% of all positive patients were presenting asymptomatically.

The third round will start testing children age 5 and older, but will not do any antibody tests, which require a blood draw, on volunteers younger than 12 years old.

Postcards will be going out to invite people to participate, and Box urged Hoosiers to take part in the study if they’re contacted.

“If you receive a postcard … please don’t throw it away, please participate in the study,” Box said.

Waiting several days for results of a COVID-19 test can cause anxiety, fear and frustration for individuals and their loved ones.

Parkview Health has obtained lab equipment from the Indiana Department of Health that will reduce the turnaround time for COVID-19 diagnostic tests in the region.

A new Roche cobas machine in the lab at Parkview Regional Medical Center will allow the health system to process a high volume of COVID-19 polymerase chain reaction (PCR) tests, with most results available in less than 24 hours.

Parkview Health had previously relied on outside labs for processing COVID-19 tests, with results averaging three days or more. The shorter turnaround time will benefit the region in several ways:

• Patients will know sooner if they need to remain quarantined or isolated.

• Contact tracers may identify those who may have been exposed faster.

While the Roche machine is capable of processing up to 1,000 tests per day, leaders at Parkview estimate the lab will run about 400 tests per day, based on current demand and availability of testing supplies.

—Cindy Larson contributed to this story.