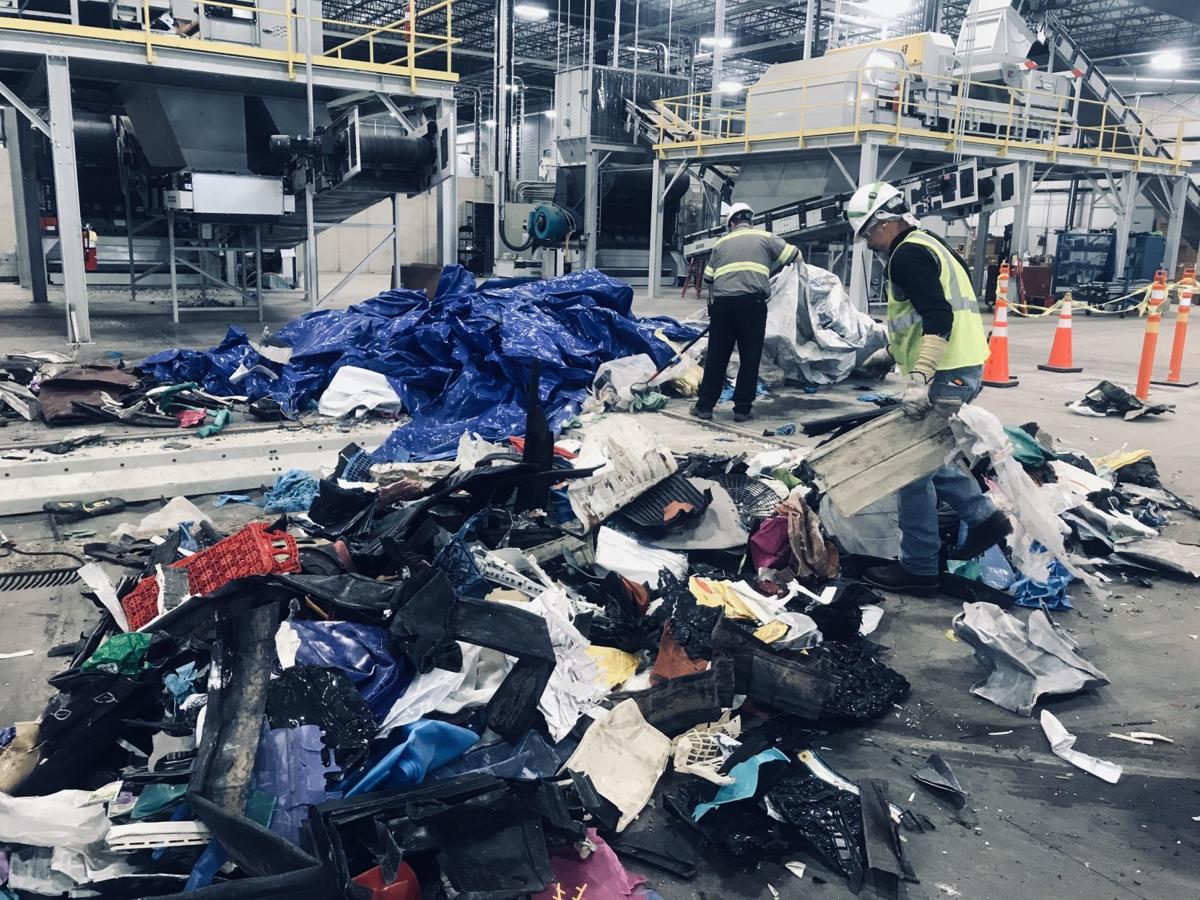 In this June 18 file photo, workers at the Brightmark plant in Ashley feed waste plastic onto a conveyor. Notice the abundance of boat shrink wrap being fed on to the conveyor that will take the material for shredding. 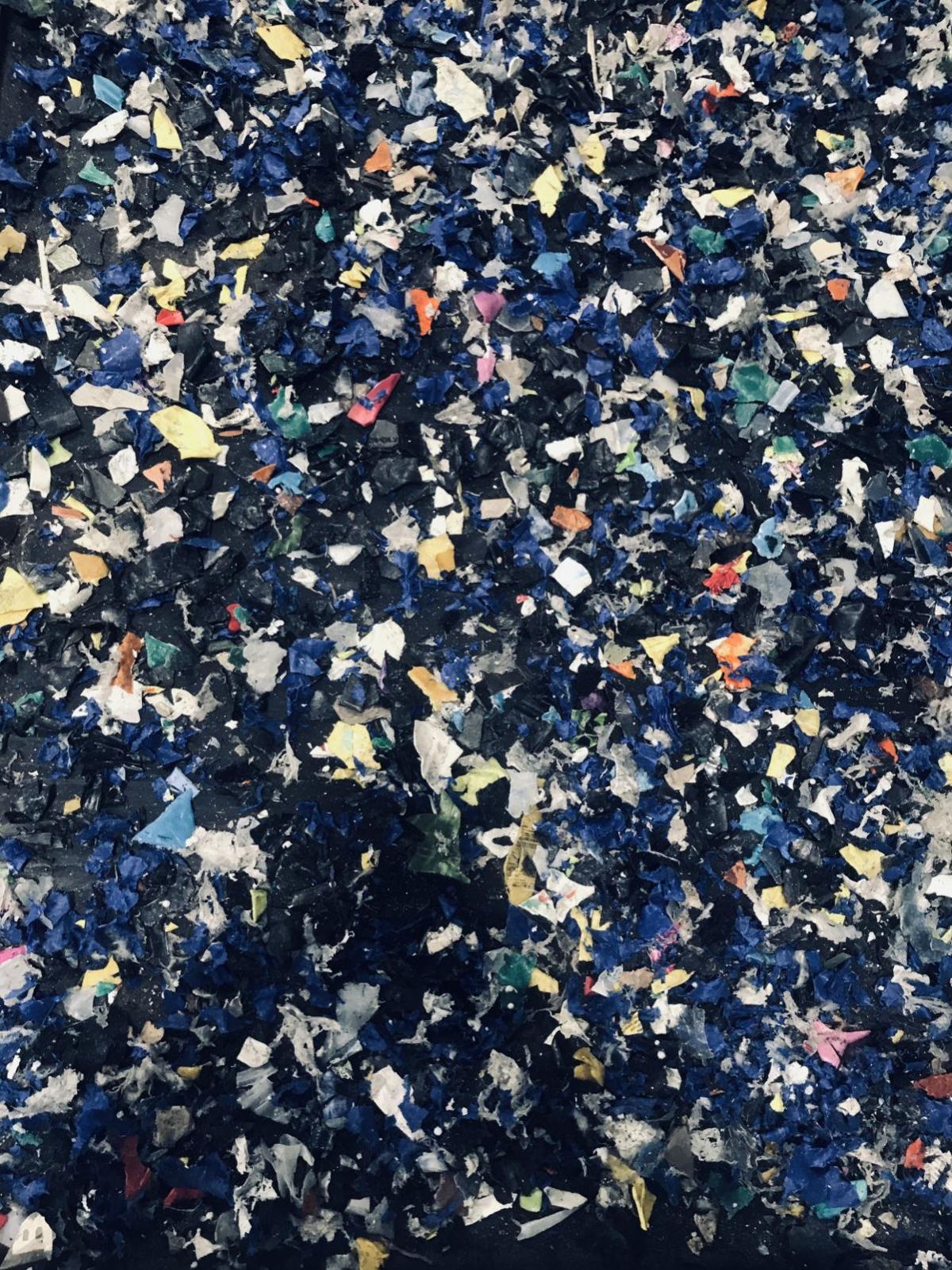 This June 18 file photo shows shredded plastic waste is dotted with the remains of blue boat shrink wrap. Brightmark in Ashley has started a program that takes in the spent winter boat coverings and converts it to fuel and wax products.

In this June 18 file photo, workers at the Brightmark plant in Ashley feed waste plastic onto a conveyor. Notice the abundance of boat shrink wrap being fed on to the conveyor that will take the material for shredding.

This June 18 file photo shows shredded plastic waste is dotted with the remains of blue boat shrink wrap. Brightmark in Ashley has started a program that takes in the spent winter boat coverings and converts it to fuel and wax products.

ASHLEY — On a recent June morning at Brightmark’s plant that was undergoing testing at the time, you couldn’t help but see lots of blue plastic going through the process of being shredded, sorted then made into plastic pellets.

As many people in northeast Indiana know, that blue plastic is what protects boats, mainly, during the winter months.

“We found that boat shrink wrap really mixes well with the other plastics we’re running,” said Bob Powell, Brightmark’s CEO, who had traveled to Indiana from the company’s home in San Francisco.

That blue plastic that can be seen all over the region where there are lakes — whether it’s at marinas or in people’s yards as they await the spring and summer boating season — works well to help bind the other waste plastic that is headed toward being converted to fuel and wax, Powell said.

Supported by the Northeast Indiana Solid Waste Management District, the project established the viability of diverting from the waste stream used boat wrap from leisure watercrafts that were placed into winter storage. The collected material will now be used as a feedstock to produce transportation fuel and wax at the Ashley facility.

Expansion of the program to additional marinas located in the four counties serviced by the Solid Waste Management District is now being planned. Those counties are DeKalb, LaGrange, Noble and Steuben. Seasonal boating, watersports and fishing are leading contributors to the local economy, with more than 200 freshwater lakes located in the region.

“Boat wrap is a pure waste stream that has always been difficult to properly recycle,” said Steve Christman, executive director of the Northeast Indiana Solid Waste Management District. “This program fits perfectly because it allows us to turn the waste into something of value to boaters.”

The wrap, a linear low-density polyethylene, is similar in structure to heavy-duty garbage bags and is difficult to recycle as a somewhat contaminated, seasonal material. By collecting the wrap from local marinas, Brightmark ensures that it does not end up in landfills and instead, finds a productive second use as a fuel source for local vehicles and power boats.

The ultra-low sulfur diesel and gasoline blendstocks produced from the boat wrap and other co-mingled plastic waste will be sold to BP, where it will then go into the wholesale transportation fuel pool in the Midwest.

“A lot of our boat owners have asked what they can do with the boat wrap because they want to do right by the environment, but we haven’t been able to give them a good solution,” said Terry Archbold, owner of Dry Dock Marina in Angola. “Now we can give them a suitable option and fulfill that need to act sustainably.”

There are more than 11 million boats registered in the United States. Many boat owners choose to wrap their boats when they are in storage during the winter months. The amount of boat wrap removed each year adds up to approximately 110,000 tons of waste, which, when recycled, would equal nearly 21,000 barrels of renewable fuel.

“The numbers show this waste problem goes far beyond just the state of Indiana,” Powell said. “But to us, it represents one of those really big problems Brightmark was created to solve.”

Brightmark’s proprietary plastics renewal process accepts co-mingled, single-stream plastics and transforms them into fuel and wax. The process leads to a 14% reduction in greenhouse gas emissions vs. traditionally captured oil. Brightmark’s first commercial-scale plastics renewal facility in Ashley — which is where the boat wrap will be shipped — will recycle 100,000 tons of mixed plastic waste each year.

The company is getting ready to start producing fuel on a trial basis. It has been pelletizing the waste plastic for weeks.