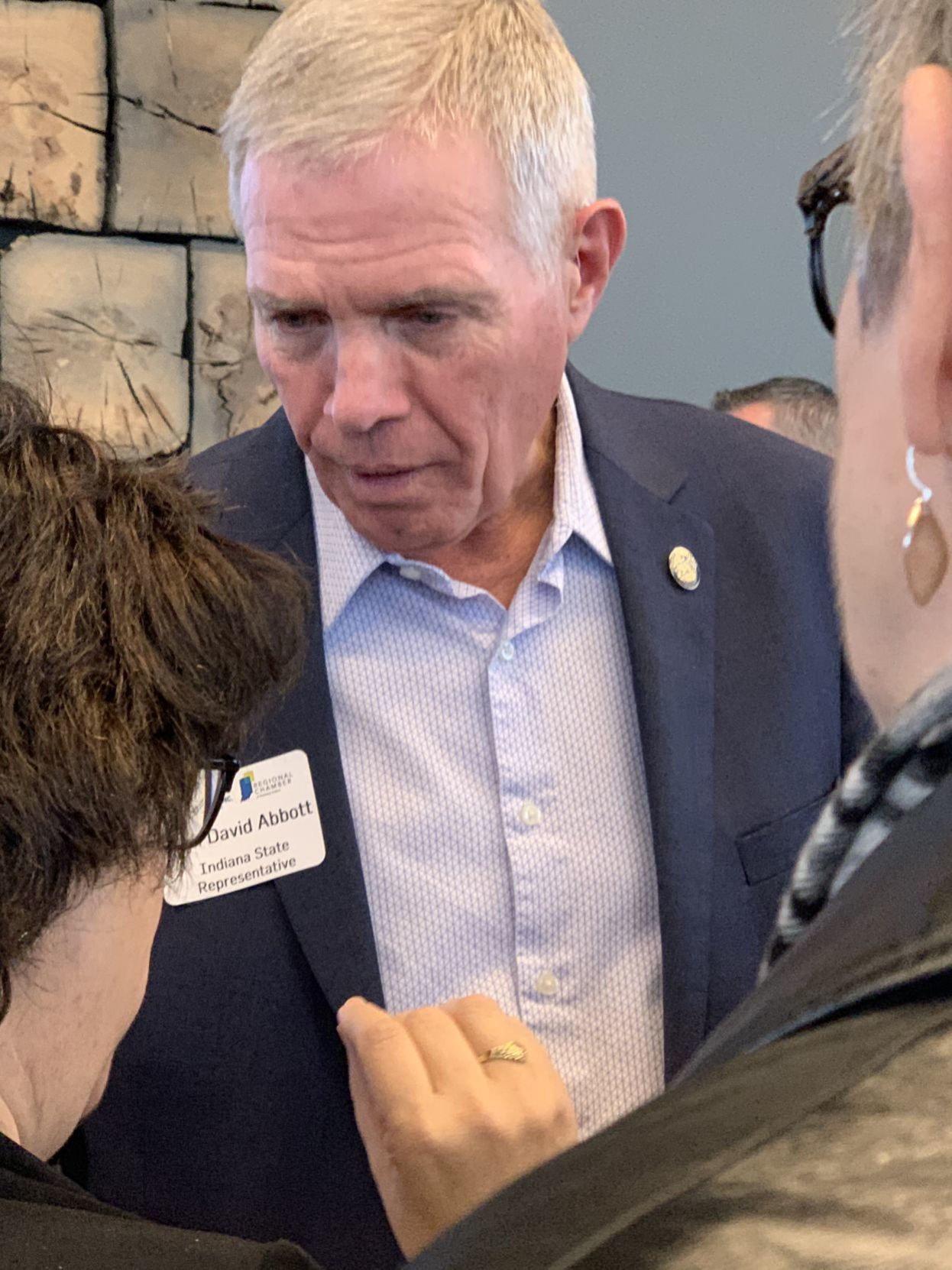 State Rep. David Abbott speaks to attendees of a legislative preview in Fort Wayne on Dec. 3. 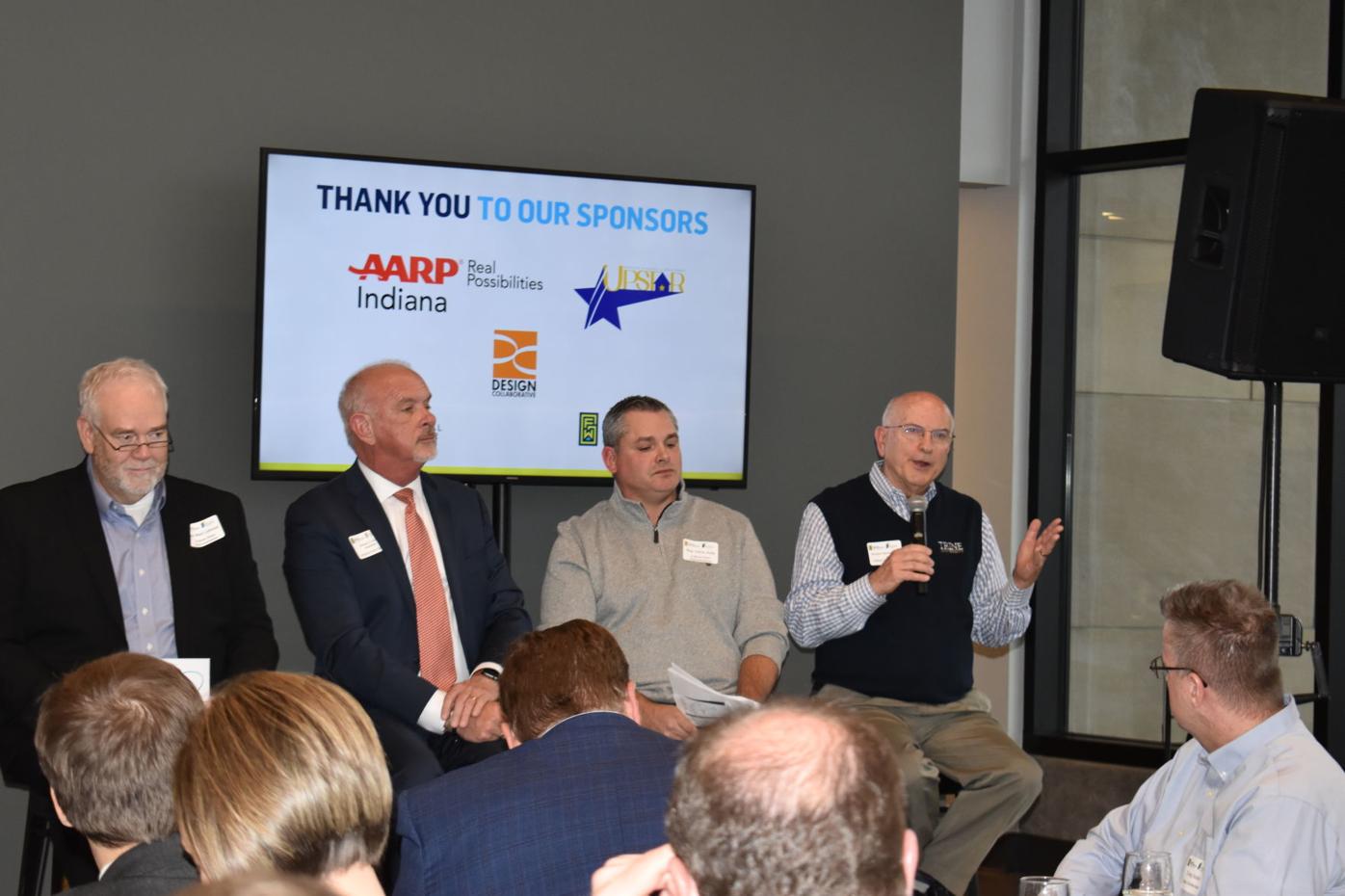 State Rep. David Abbott speaks to attendees of a legislative preview in Fort Wayne on Dec. 3.

2020’s General Assembly session will be a short one, but Greater Fort Wayne and the Regional Chamber of Northeast Indiana will be advocating for turning U.S. 30 into a freeway from the Ohio border to Valparaiso and maintaining and growing economic tools to continue funding projects to attract talent.

Meanwhile, northeast Indiana legislators will be promoting bills that affect health care and education when they start the session Jan. 6.

The Regional Chamber of Northeast Indiana will seek $15 million from the state for an environmental impact study to turn U.S. 30 into a limited-access highway, Bill Konyha, chamber president and CEO, told the dozens of people gathered Dec. 3 at Promenade Park’s Park Foundation Pavilion at the legislative preview.

U.S. 30 is a major thoroughfare for moving goods from the east to Chicago. It has stoplights through higher-traffic areas, causing backups for a mile at times in some areas.

Another priority for the chamber this legislative session will be rural broadband, which “is critical for our businesses, even in the nonrural areas,” Konyha said. “If we want our rural communities to thrive and survive, they have to have the same tools that we have.”

It also will seek to expand and enhance early childhood education.

“Early childhood development is consistent with development of our 21st-century talent and an absolute requirement for us over time to move firmly into the 21st century,” Konyha said.

“Our mission is to grow a nationally recognized economy,” said Melissa Beber, GFW’s director of advocacy. “We do this by growing jobs, growing wages and growing the economy. We understand that decisions made at the Statehouse have a direct impact on whether and how these goals will be met.”

Among GFW’s 1,350 business investors who represented 80,000 workers, the No. 1 issue continues to be the inability to attract talent, Beber said. As a result, GFW created the MadeByMe coalition that includes students, parents, educators and businesses to discuss jobs in skilled trades. It also works with the AWS Foundation on the Employing People with Disabilities Initiative. Its Bridge program pairs startups with established businesses that sponsor them in receiving GFW benefits.

This year, the community has seen 1,200 new job commitments and nearly $52 million in annual payroll with $139 million in investment.

The state hasn’t continued to fund Regional Cities Initiative to fund quality-of-place projects to attract residents and talent, so a new concept called investment hubs has been created that’s built off RDAs. They would allow RDA members to create local option sales taxes, a food and beverage tax or a local income tax that would put a portion of the money in the RDA to fund regional projects.

What’s expected from this session:

• It must be completed by March 15, and likely will wrap up by March 11 because Indianapolis will be inundated with visitors for the NCAA Tournament, Beber said.

• It will see Rep. Todd Huston, R-Fishers, working with outgoing House Speaker Brian C. Bosma, R-Indianapolis, to take over his job after Bosma announced that he’ll retire at the end of the next session.

• Vaping will likely be a top issue with taxation, age limits and flavoring restrictions among possibilities, Beber said.

Ten northeast Indiana legislators attended the preview to report on their goals for the session:

• Sen. Travis Holdman, whose District 19 includes eastern Huntington County; chair of the Tax and Fiscal Policy Committee: Will promote a bill for a performance hub that’s “RDA-light” and will affect only central Indiana. He’s also concerned about hospital costs “what I consider near a crisis in Indiana.”

• Rep. Matt Lehman, whose 79th District includes southern Allen, Adams and Wells counties; house majority floor leader: Is working to put data behind the grant process for rural broadband because many grants are being used in areas where there already is service. He also wants to know “what are we going to do to drive (health care) costs down.” He’ll promote a transparency portal to see the costs of medical needs such as surgery at various facilities. He’s also concerned about out-of-networking billing that weren’t the patient’s choice. “We’re not going to wait to see what Washington does; we’re going to try to tackle that issue here in Indiana.” He’ll be part of another meeting in January with the governor’s office on funding for the U.S. 30 study.

• Sen. Justin Busch, whose District 16 includes western Allen County and pieces of Whitley County: He’s interested in rising health care costs, changes in the charity gaming bill to allow donors to pay for plastic ducks in SCAN’s annual duck race fundraiser with debit cards: “They estimate they can raise an extra $250,000 a year with that.” Turnstone also would benefit. He’ll also work on a media bill. Georgia invested $500 million into a tax credit program to attract movie and TV production and saw a $10.5 billion impact on its economy. With Sweetwater being in his district, it seems a natural to attract such business.

• Rep. David Abbott whose District 82 is northwest of Allen County, parts of Whitley County, all of Noble, LaGrange and Elkhart counties: Mentioned jail overcrowding. Currently, over 90,000 people are awaiting trial in jail because they can’t afford to bond out, “Sometimes for a longer period of time than what the punishment would be.” Legislators would release suspects in Class B and C misdemeanors. He’ll have a bill on vaping, hearing that students surreptitiously use electronic cigarettes in class, that would raise the age to 21, ban flavors, and call for a tracking system of ingredients. He also will look at renaming Indiana State Police 911 dispatchers to 911 first responders. ISP dispatch positions have declined from 147 to 97, with the reduction of districts, “but that made the coverage area for the remaining 97. They’re overworked. They’re overstressed.” The ISP is losing dispatchers and the pay level does not match the stress level of the positions, he said. They deal with the situation until officers arrive on the scene. “When it’s all done, they hang the phone up and they pick up another call. They have no letdown.” He wants to increase their pay, but it’s not a budget year. Also, as a Gold Star parent, those who’ve had a child die in a military conflict, he’s promoting a bill to require that state buildings fly a Gold Star flag for the month of May.

• Sen. Andy Zay, whose District 17 wants to create a vision for education, which is a core for workforce development.

• Rep. Dan Leonard, whose District 50 includes Huntington, western Wells County and a portion of Allen County; Ways and Means and Judiciary and Labor committees, chair of the Rules and Resolutions committees: Will seek to update the unemployment law and to eliminate the 9 of the 13 remaining township assessor positions in the state that are Lake County.

• Sen. Dennis Kruse, 73, whose been in the legislature for 30 years, represents District 14 covering Allen and DeKalb counties: Wants to decrease regulations, saying that a book with regulations for schools is 1,500 pages long. “I think that is terrible.” He’d like to eliminate half of those.