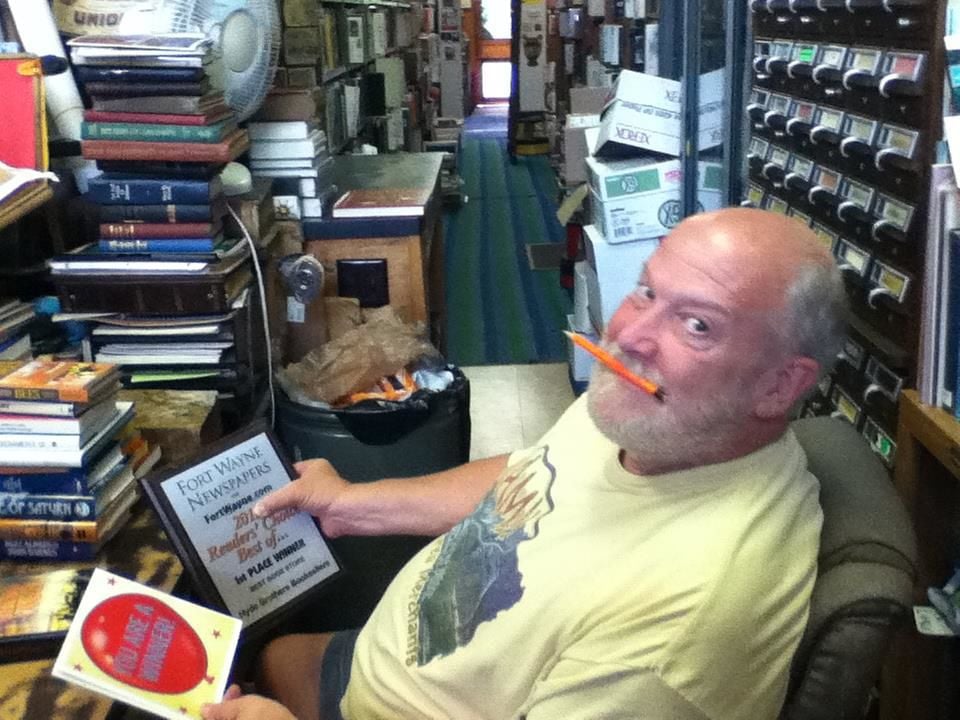 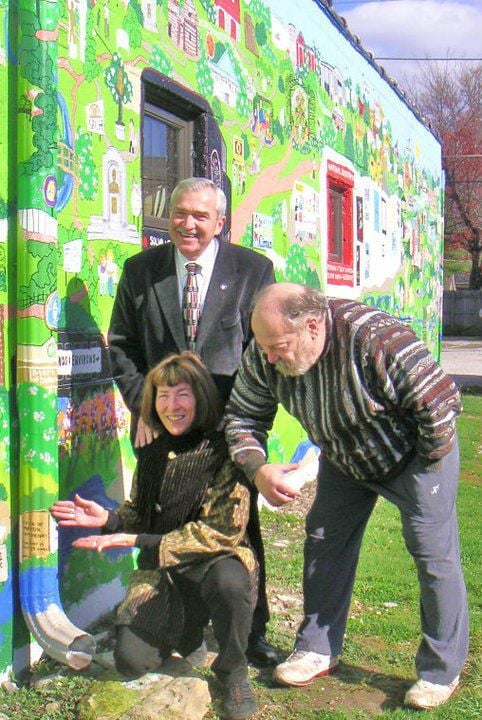 Sam Hyde, right, stands near Julia Meek and Fort Wayne Mayor Tom Henry at the unveiling of the mural, “The Fort Wayne Story,” in 2009 on the side of Hyde Brothers Booksellers. Meek wants to refurbish the mural as a memorial to her longtime friend, Hyde, who died July 9.

Sam Hyde, right, stands near Julia Meek and Fort Wayne Mayor Tom Henry at the unveiling of the mural, “The Fort Wayne Story,” in 2009 on the side of Hyde Brothers Booksellers. Meek wants to refurbish the mural as a memorial to her longtime friend, Hyde, who died July 9.

Julia Meek has a hole in her heart. It’s where her longtime friend Sam Hyde, owner of Hyde Brothers Booksellers, once resided.

Meek, known to many in the Fort Wayne area as host of WBOI’s “Folktales,” was working as usual with Hyde at the bookstore on the Saturday before his July 9 death. He collapsed that Saturday night and never regained consciousness, according to Laurie Walls, a three-year employee of the store, which reopened as usual July 10. Having the bookstore go on with business as usual is what he would have wanted.

Meek, who started helping Hyde and his brother Joel, collect books a few years before they opened the used-book store at 1428 N. Wells St. in 1992, is proud to say she was the first employee. Well, volunteer.

They’d been friends for decades before that. When she got a job as an event coordinator for a caterer, she got him work. They both had restaurant experience. Meek, a graphic artist, did the bookstore’s logo. Hyde usually wore a T-shirt with that logo on it. And when he got a facade grant from the city, he had her do a mural on the side of the building.

Their lives were interconnected through weddings, deaths and divorce.

“It was always that back and forth,” she said.

Each Saturday she’d still do data entry on the store’s book sales. And that last Saturday they talked again about refurbishing the 2009 mural called “The Fort Wayne Story.” Unlike some of the large pieces on buildings today, this mural requires some effort to pick out the bridges, churches and businesses from the city’s past and present.

“People would say, ‘You have to get out of your car and get up close and go over to it.’ We’re like, Yeah.”

Since her stroke two years ago she can’t do all the climbing needed to do the touch-ups, so she’ll need to gather a team, she said.

Now, with Hyde’s passing, “I’m redoubling my effort to get it up as a memorial and legacy to Sam.”

Walls had been taking several calls from customers July 10, including one from Colorado, who wanted to express their sympathies.

The store explains on its website that it has a “fondness for the odd and obscure” and carries 150,000 titles.

“This was always their dream,” Walls said. “They were both book nerds.”

The two brothers differed on their business goals, so Joel left to found Every Other Book on Crescent Avenue at North Anthony Boulevard. He explained the name came from the fact that he took every other book from Hyde Brothers. That bookstore later closed.

Hyde Brothers is a gem for those who cherish reading on paper. Bookcases are stacked high with an amazing amount of titles and subjects including cookbooks, detective novels and children’s titles.

And Sam Hyde knew where every book should be, Walls said. She’d get a phone call from a customer and would wonder where the requested book might be located. Immediately, Hyde would tell her exactly what area to look in.

He had such an encyclopedic knowledge of the books that he even knew who published them, she said.

Within a few hours of a Facebook posting on Hyde’s death, the page had received nearly 200 comments. The store’s cats, including Scout, made their way around reporters wanting to hear about Hyde.

“Last night, we lost our beloved friend and fearless leader, Sam Hyde,” the post read. “He was surrounded by his family.

“He truly was the fantastic person you thought he was. Our thoughts and love are with his family.

“We know everyone’s next question will be ‘What about the store?’ Sam didn’t want us going anywhere. We will be open normal business hours. If you feel the need to stop by, do not hesitate. Sam understood the comfort of being surrounded by books.”

The staff put a 1970s photo of Hyde on a box so customers could insert a message for his family.

In addition to his brother, he is survived by his wife, Marilyn, son Jacob (Ciara) Hyde of Huntington; daughter Victoria L. Jaurqui of Fort Wayne; four grandchildren and three great-grandchildren. He was preceded in death by his son Benjamin Hyde, according to his obituary.

Meek knew exactly what photo that was on the memory collection box. He’d had a beer in his hand. She took it while he was in her then-West Central Neighborhood apartment around 1973.

I’d talk to Sam over the years to buy a book or sell something over the years. I last talked to him to include an item in Business Weekly about the store’s upcoming midnight sale in December. His first reaction was to hang his head and slump his shoulders. The sale was already so popular, drawing about 200 people, he wasn’t sure he wanted more people to know about it.

The bookstore wasn’t about making money, Meek said. Hyde was all about his friends and he loved to tell folktales.

Walls said, “My favorite thing about him was his storytelling. He was so vivid. He had such a voice.”

“It was in his DNA,” Meek said. “It was something he shared with his family and his bookstore.”

“His joke was that he wanted to be stuffed and shoved into a corner,” Walls said.

Maybe in a way he’s still there, with the books he bought that sit on the store’s shelves and those, as one person wrote on Facebook, filling his customers’ bookcases.