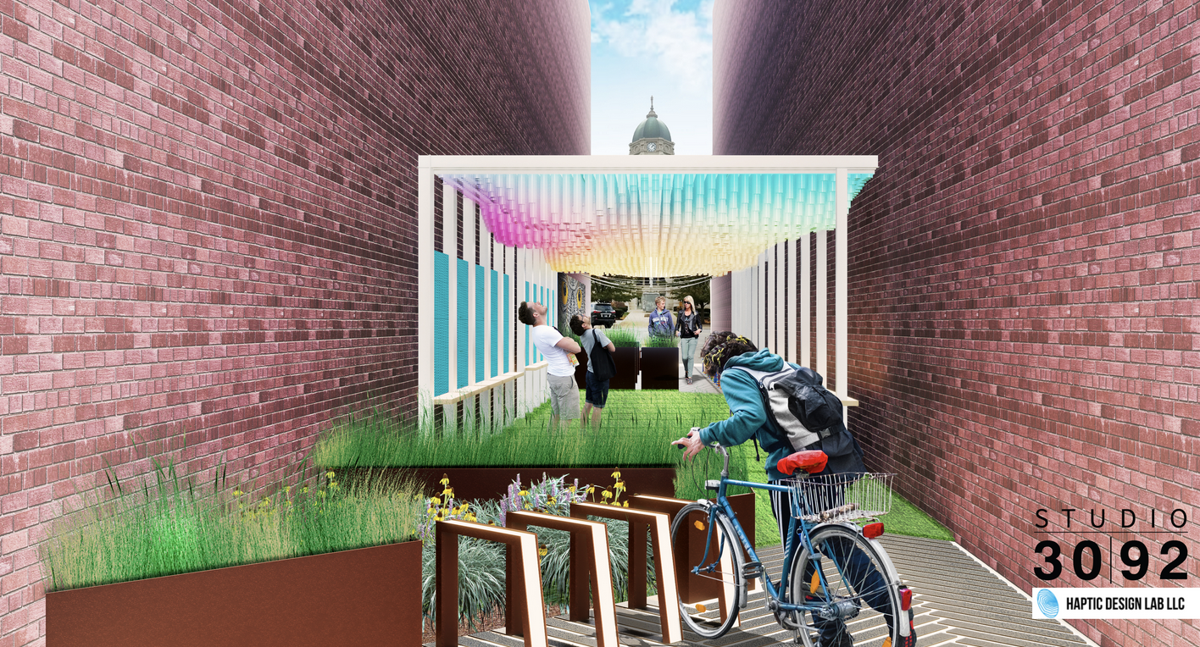 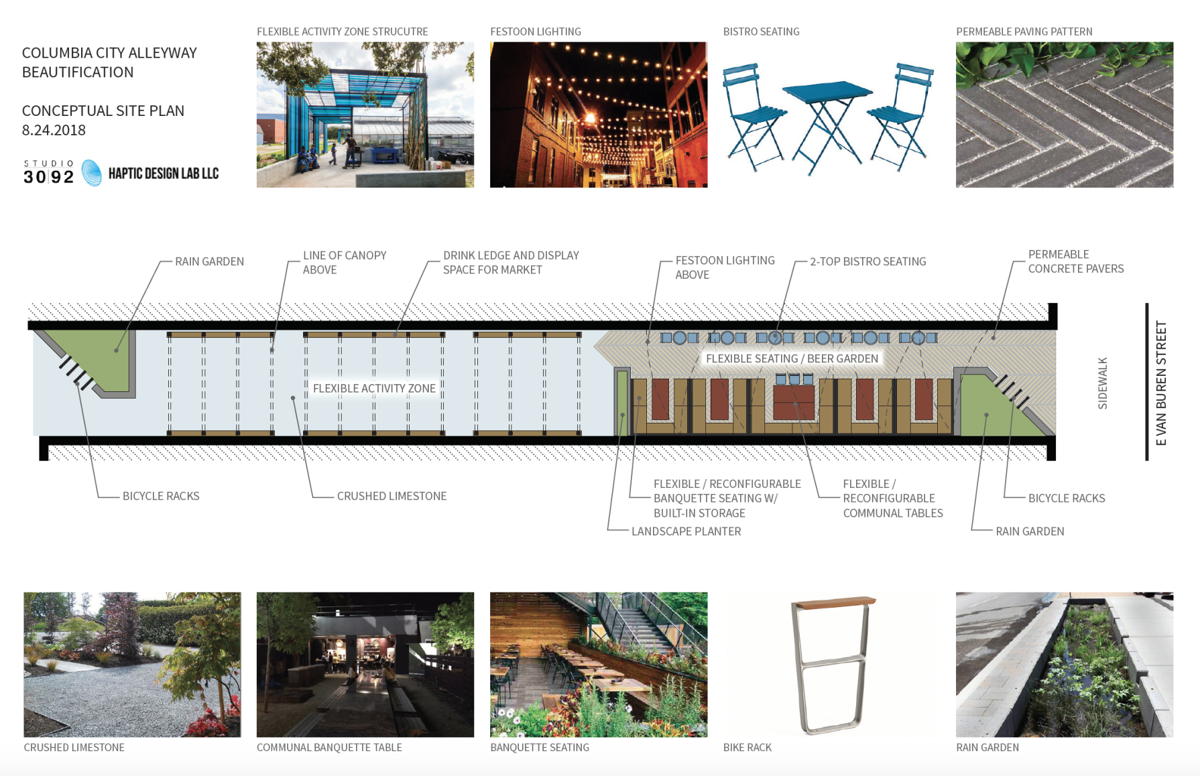 Blueprints of plans for Columbia City’s Ohki Alley, which is being transformed with canopies and other features.

Blueprints of plans for Columbia City’s Ohki Alley, which is being transformed with canopies and other features.

As someone who grew up in Columbia City and attended Columbia City High School, Nick Satterfield was thrilled to be part of a project that will help improve his hometown’s downtown.

Calling himself an “artist” who helped design the new venture, Satterfield was one of dozens of folks who took part in a development to beautify an alley space in the Whitley County community.

The spot, now known as Ohki Alley, and located between 116 and 118 W. Van Buren St., was once nothing more than an empty area that the city used during snowstorms, said Riley Hollenbaugh, Whitley County Economic Development Corp. director of workforce and community development.

“There was pretty much nothing there before,” Hollenbaugh said. “It was actually a place where the city stored snow.”

But thanks in part to a community fundraiser, the alley space now is being transformed. A crowdfunding website raised $50,000 for the project late last year, which led to another $50,000 being kicked in by the Indiana Housing and Community Development Authority.

That influx of cash helped create a vision for the alley that will ultimately – designers hope – transform it into a downtown jewel.

New “pavers,” or creatively shaped blocks on the ground, will line the alley pavement, and several spots along the lane will feature artificial grass, called X Grass, to brighten the area. Satterfield said X Grass is similar to artificial turf used in pro football stadiums.

Canopies also will dot the center of the alleyway, giving folks shelter from the sun and some decoration, as well.

“There will be three canopies, 10 feet by 8 feet each, spaced down the center of the alley,” said Tyler Whitehead, another “artist” who helped craft the alley’s design. “Each canopy is about the same size, with slight variations in color, tone and texture. The frames are made of cedar, the baffles are made of white oak.”

And each canopy also will hold an acrylic panel on top, using sunlight to reflect interesting colors and light inside the alley space.

“The acrylic acts like a prism, and kind of bounces colors around the alley,” said Whitehead, a Ball State graduate who now works for Haptic Design Lab in Minneapolis. “And as you walk through, each visitor will get a unique experience that encourages people to move through, rather than just to sit there.

The alley also will feature seating along its length, chairs that look almost like restaurant booths, Whitehead said.

“The furniture will be installed in late August,” he said. “The architect is designing and building the furniture. It will have hinges so you can flip it around. It’ll be made out of white oak, so it’s hard wood – all custom-built and designed specifically for the alleyway.”

The alley is actually named after Shinzo Ohki, a Japanese immigrant, artist, businessman, and avid gardener, who immigrated to Columbia City in the early 1900s. Ohki owned a company that sold the first fermented soy sauce, the Shoyu Factory, often referred to as “Show-You.”

Satterfield, a 2005 graduate of Columbia City High School, said the notion was not to just improve the alley space, but to create a connection to other spaces downtown, and to honor Ohki’s memory, as well.

“Initially, this was just introduced as a way to brighten up the alley,” he said. “But the EDC wanted to create a connection with nearby shops and restaurants. And we really wanted to make the alley something to celebrate Mr. Ohki, particularly the fact that he was an ardent gardener.

“So, to that end, we tried to introduce greenery and colors into the design — greens, purples, and oranges that celebrated that facet of his life,” said Satterfield, 33.

And alley improvements also should improve drainage, he remarked.

“Before, all of the storm water that would fall in the alley had to be managed by the city’s system,” he said. “But now, our new pavers have gravel underneath them, and that helps capture the rainwater and keeps it from running into city streets. “So the gravel and the (artificial) grass will help soak up more water.

“For 99% of the storms that come through, the storm water will be managed by the alley. Before, it would just run into the city’s system.”

Work on the improved alley began in late February of this year, when construction crews began ripping up the old asphalt in the space. Designers, architects, and builders hope to be completely finished with the project by late summer 2020.

Hollenbaugh said he hopes the completed alley does more than just beautify a once-barren downtown space.

“These are small projects,” he continued, “but they have a ripple effect that shows we’re a great community for businesses and for people to live.”