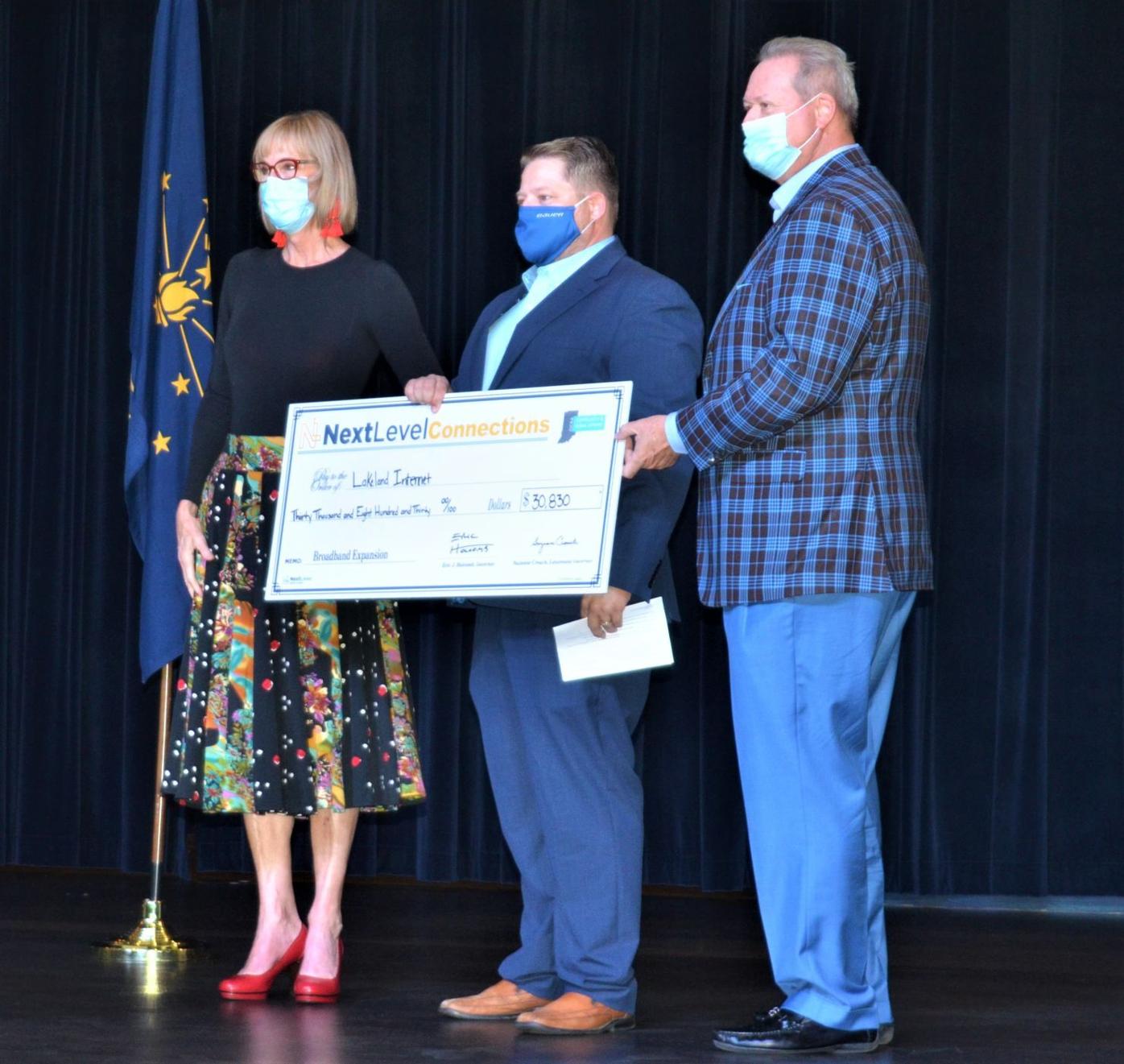 Lt. Gov. Suzanne Crouch presents Mark Byler and Don Banowetz with a $30,830 grant for Lakeland Internet that will help fund a project that will serve the Pine Canyon Lake area with internet access. 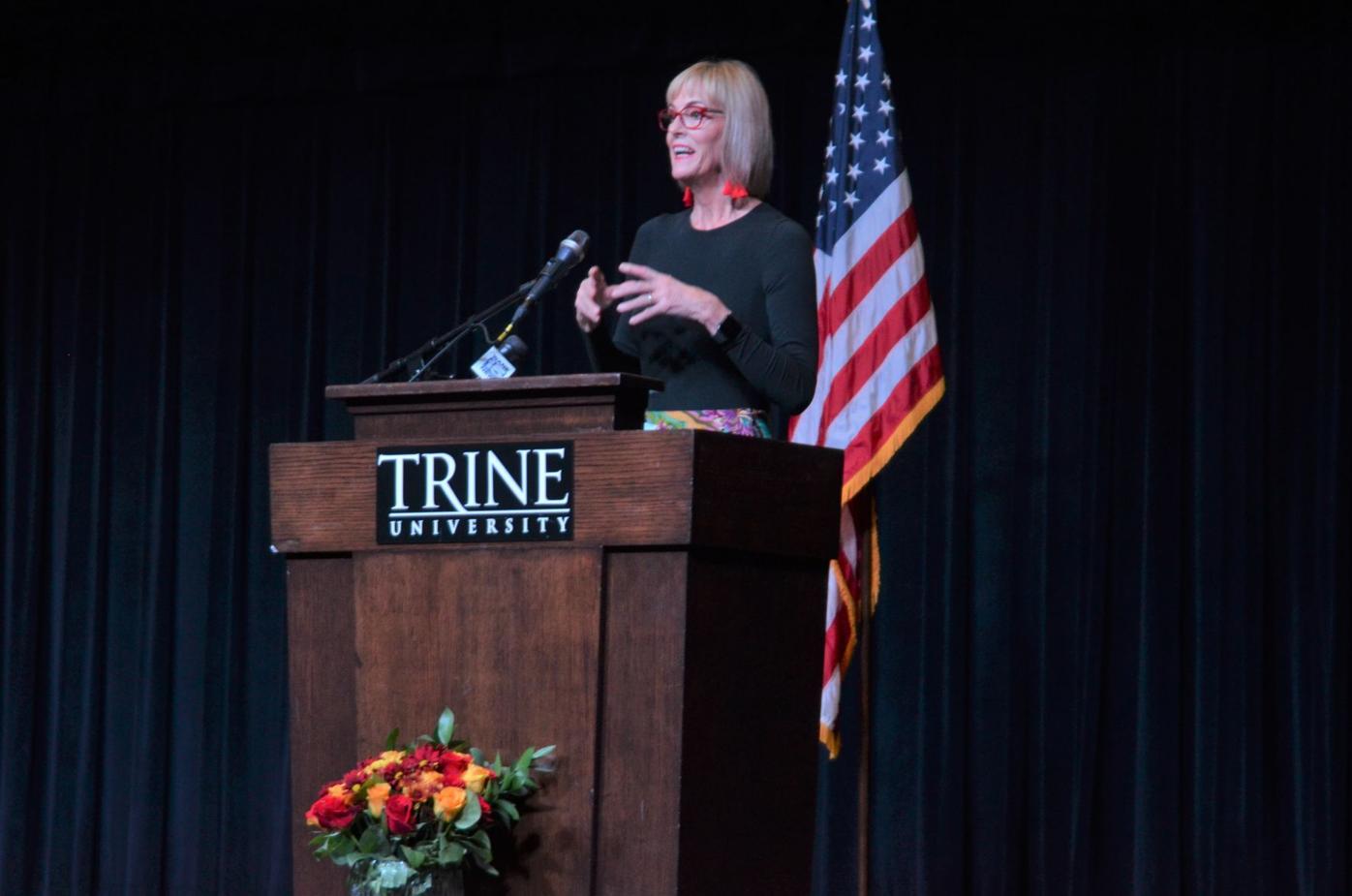 Lt. Gov. Suzanne Crouch on Sept. 9 presents on the Next Level Broadband Grant program on the stage in the T. Furth Center for Performing Arts at Trine University. One of the grant recipients is Angola-based Lakeland Internet.

Lt. Gov. Suzanne Crouch presents Mark Byler and Don Banowetz with a $30,830 grant for Lakeland Internet that will help fund a project that will serve the Pine Canyon Lake area with internet access.

Lt. Gov. Suzanne Crouch on Sept. 9 presents on the Next Level Broadband Grant program on the stage in the T. Furth Center for Performing Arts at Trine University. One of the grant recipients is Angola-based Lakeland Internet.

ANGOLA — Lakeland Internet will soon be able to service approximately 40 households on Pine Canyon Lake thanks to a grant from the Next Level Connections Broadband Grant Program.

The program is administered and overseen by the Indiana Office of Community and Rural Affairs and Lt. Gov. Suzanne Crouch.

Crouch presented the grant Sept. 9 on the stage at the T. Furth Center for Performing Arts at Trine University to Lakeland Internet General Manager Mark Byler and Don Banowetz, president of All Pro Integrated Systems.

“That is a very underserved area,” said Byler. “It’s hard for the people there to get service.”

Banowetz said Surack founded the company after buying a lake home in Steuben County and realizing the internet service available was sub-par. He wanted to fix that, so he started the company.

Pine Canyon Lake is a small lake near Angola, surrounded by acres of pine and hardwoods.

This project will provide modern internet capacity to that area. Currently, people can only get internet service through phone connections in this area that lies in the Prairie Heights Community Schools district. The lake is located south of C.R. 300N and west of C.R. 500W.

“We are excited for this grant because it will be life changing for the area that has struggled with horrible internet,” Banowetz said.

Crouch said there is a reason she’s spent so much time in Steuben County.

“Your part of the state has such and incredible spirit of community, of collaboration and of partnership,” she said. “You have achieved great success here and that wouldn’t be possible without the involvement of so many at the state and local level.”

A 2018 study done by Purdue University showed some 500,000 Hoosiers are living in “internet darkness.”

Especially with the COVID-19 pandemic, being able to be connected for work, for education, telemedicine and for quality of life has come to the forefront.

“Being connected isn’t a luxury anymore,” Crouch said. “It is almost a necessity.”

“It’s a long process to ensure that these projects are tested and to ensure it will serve those Hoosiers that need it most and are facing having the least amount of access to broadband,” he said. “We go through the process to ensure there aren’t other broadband opportunities to these places, work with applicants to complete the application and then other providers have the opportunity to challenge those.”

He applauded his staff, including Andrea Kern and Mary Shaw, for their hard work and being vital in the process that led to Sept. 9’s grant presentations.

“I know that what is important today is that we can get three locations around the state greater access,” he said. “Hoosiers now in these areas will have better access, will be able to reach out to their doctors, students better access their homework.”

He continued to say how much the providers are appreciated for being willing to provide the service, residents who spoke out to show the need for the funds as well as local and state government that helped make it happen.

“The lieutenant governor strives to push all of her agencies towards excellence,” he said. “That’s why, I think we could create this program that is unique and could be a model for other states around the country.”

The other recipients of Next Level Broadband Grants were Eastern Indiana WiFi out of Grant County, receiving $283,739 and Mercury Wireless receiving $110,040 to serve portions of DeKalb, Allen and Whitely counties.

The $100 million Next Level Broadband Grant Program is the largest single state investment in broadband. In total, rounds one and two of the program have awarded more than $79 million for broadband infrastructure for more than 21,900 homes and commercial locations in 41 counties.