Get Started
You are the owner of this article.
Edit Article Add New Article
You have permission to edit this article.
Edit
Home
Newspapers
Industries & Topics
News
e-Edition
Opinion
People
Book of Lists
Events
Jobs
More...
1 of 3 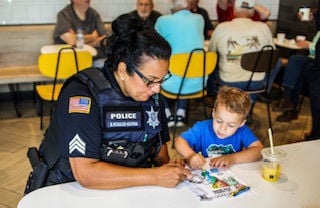 “Michael took some warming up but eventually we were a coloring team,” Sgt. Sofia Rosales-Scatena said of this photo put on the police department’s Facebook page after a Color with a Cop event. “His mom said he couldn’t stop talking about meeting all of us. This stuff is what my job is all about.” 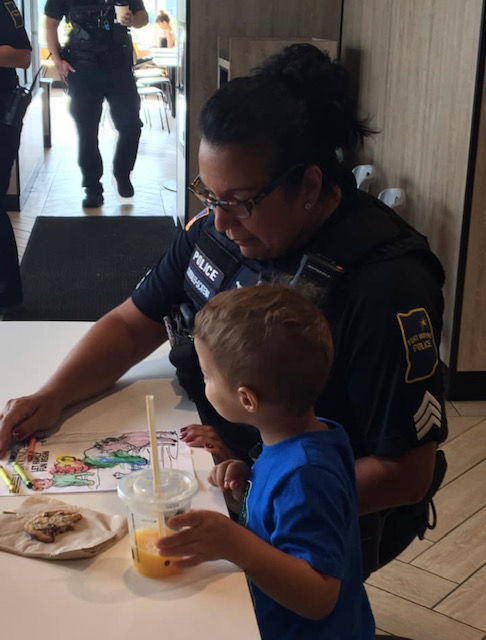 Sofia Rosales-Scatena works as the Fort Wayne Police Department’s public information officer as well as on the hostage negotiating team. One of the parts of her job that she likes most is spending time with children and promoting police work to girls as a career. 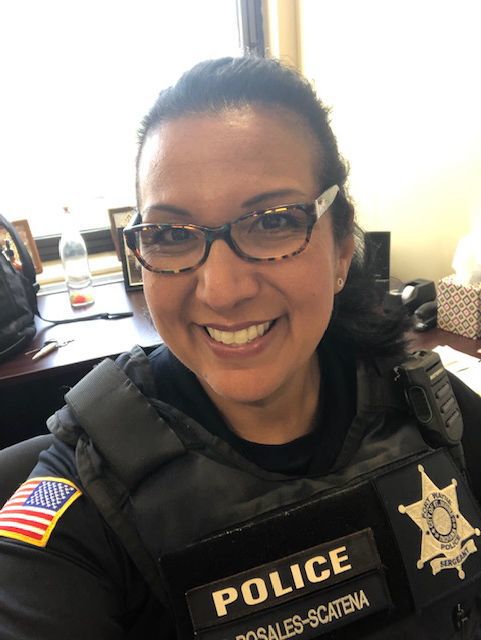 Sofia Rosales-Scatena came back from a serious crash while responding to a police call. Since then, she’s more aware of the needs of people with accessibility issues.

“Michael took some warming up but eventually we were a coloring team,” Sgt. Sofia Rosales-Scatena said of this photo put on the police department’s Facebook page after a Color with a Cop event. “His mom said he couldn’t stop talking about meeting all of us. This stuff is what my job is all about.”

Sofia Rosales-Scatena works as the Fort Wayne Police Department’s public information officer as well as on the hostage negotiating team. One of the parts of her job that she likes most is spending time with children and promoting police work to girls as a career.

Sofia Rosales-Scatena came back from a serious crash while responding to a police call. Since then, she’s more aware of the needs of people with accessibility issues.

Tell me a little bit about yourself. Are you from here; I saw you had gone to school here.

I grew up here. I was born here. My parents are both from Texas. Went to school here. I went to IPFW. I played college tennis. At the end of my senior year, (the police department was) hiring so I put an application in. I wasn’t sure if this was what I wanted to do, but I thought I’ll give it a try, and I kept passing the steps. So I figured it was meant to be, so I came into this job and fell in love with it, absolutely loved it.

What drew you to the police department. It’s a very regimented, physical kind of job.

Honestly, I will say that at the end of my last semester they were hiring, and I needed a job. … I figured if I didn’t like it I’d find something else, but once I started I never looked back.

(When you joined the force in 1994) how many women were part of the force then?

I think there was probably in the 20s. Now, I think, we’re closer to 60. Still could use some work in that regard, and I think that’s kind of one of my passions. I think as women we’re kind of geared toward certain careers. And we just never think about these male-dominated professions really unless you have a family member that’s already here or a friend, or something like that. … I always want to leave everywhere I go a little bit better, so if I can get more women here, if I can get more minorities here, and I can get people thinking about this as an opportunity. It doesn’t mean you have to do it, but think about it as something you could do, that would be great.

How do you do that? Do you go out and talk in the community?

If someone wants me to come talk to their group I do that. I’m also starting to work on a girls police camp, for maybe middle school girls, high school girls where we can get them in so they know that this is an opportunity for them. I think a lot of kids they see police, they know it’s a job but I don’t think they really think that they can do it.

What are some of your duties?

I handle all media relations. Anytime the media wants something from the police department they go through me. So I have to get information from different departments and get that information in a way to the media that won’t affect cases. So if that’s a summary, that’s a summary. If I can’t give anything, I can’t give anything. Sometimes it’s just I can talk about things very generally and I think the media wants more facts, but sometimes we just can’t give those because don’t want to hinder anything for the victims or the suspects. Everyone deserves their fair shot. Also a part of my job is to go out into the public, so when a group asks to speak I will go out and talk with whatever they want to talk about regarding policing. I’ve had a wide range from crime prevention to scams to what it’s like to be a female, what it’s like to be a mom, what it’s like to be a minority.

What has your job been like on the street, especially as a woman dealing a lot of times (with male suspects)?

It’s tough, I will say that, but I like to think that I have a commanding presence and I am pretty strong, so I kind of take control. I find that a lot of not only men, but women either, don’t like taking direction from a woman, so that makes it difficult. I’ve arrived on scenes and I’m the first officer there, and generally the first officer is the one who starts the investigation. It’s their investigation. Then I’ve had male counterparts come and then everyone wants to talk to them and not me. So my guys have been great. They’re always … ‘That’s her investigation. Go talk to her.’ So the bonds we have here are pretty strong and the guys know that I can hold my own…I’ve earned everything that I’ve ever gotten.

I’ve been a hostage negotiator probably a little over 15 years and I was running lights and sirens, stopped at the intersection to clear traffic…There was a truck coming that didn’t stop, didn’t slow down and hit me right into the driver’s door. Shattered my hip, broke all my ribs. I ended up with a bruised lung. After hip surgery, a week later I ended up back in the hospital with several blood clots that had traveled to my heart and lung. So I was in a hospital for almost about a month. … Then I had a year recovery. It was a long year. I have a newfound appreciation for being able to walk and not being a in wheelchair. That was very difficult. Kudos to everyone in a wheelchair. I don’t really find a lot of things handicap accessible, so as I would try to do my daily life it was hard. My foster daughter was playing softball and going to the fields it was very hard (for me) to maneuver around. … Since coming back, when I was working the streets, I hit the handicap spots really hard because that’s one of my pet peeves. As someone who needed that for a short period of time, I hate to see people use those who don’t need them.

How long have you been head of the Patrolmen’s Benevolent Association?

I’m no longer the president, but I did two (two-year) terms (representing 360 officers). That was very challenging. Lots of contracts. Lots of rules. Lots of discipline. We had a huge amount of officers involved in … shootings at that time. So it was just a really busy time for me. I learned a lot. I’m grateful for the experience. So it taught me a lot, especially on how to deal with the administration and dealing with people, and no one’s ever happy.

How had the beat officer-type of work changed just in the time that you had been doing it?

It’s changed so much. Equipment, technology, just the evolution of how we interact with the public. Back when I came on we didn’t have take-home cars, we had to check out radios, we had to check out basically every piece of equipment that we wanted, except for our handgun. But the technology is where it’s just supersonic speed, it’s just gone. … Obviously the younger guys that come on know how to maneuver the computer system way better than I do. …

It’s become really, basically, a recorded job. We’re recorded on video camera every time we turn the lights on. We have body mikes. Some officers have body cams …some specialty units. … We just teach everyone now that just assume you’re being recorded. And really you shouldn’t be doing anything differently than you would normally. It’s just be aware of that.

How did you come to be the public information officer?

Mike Joyner was retiring, and he’d served here for a long time. I think I actually went to him and said, ‘Hey, I think I might be interested in that job.’ We talked very briefly and he recommended me to the chief. He said I was his only recommendation at that point. Mike and I came on (the force) together. … So he knew me and he knew my work product. He knew who I was, on a personal level too. We’d been friends for a long time. So I was very humbled that he said I was his only recommendation.

Other: Previous president of Patrolman’s Benevolent Association for two terms