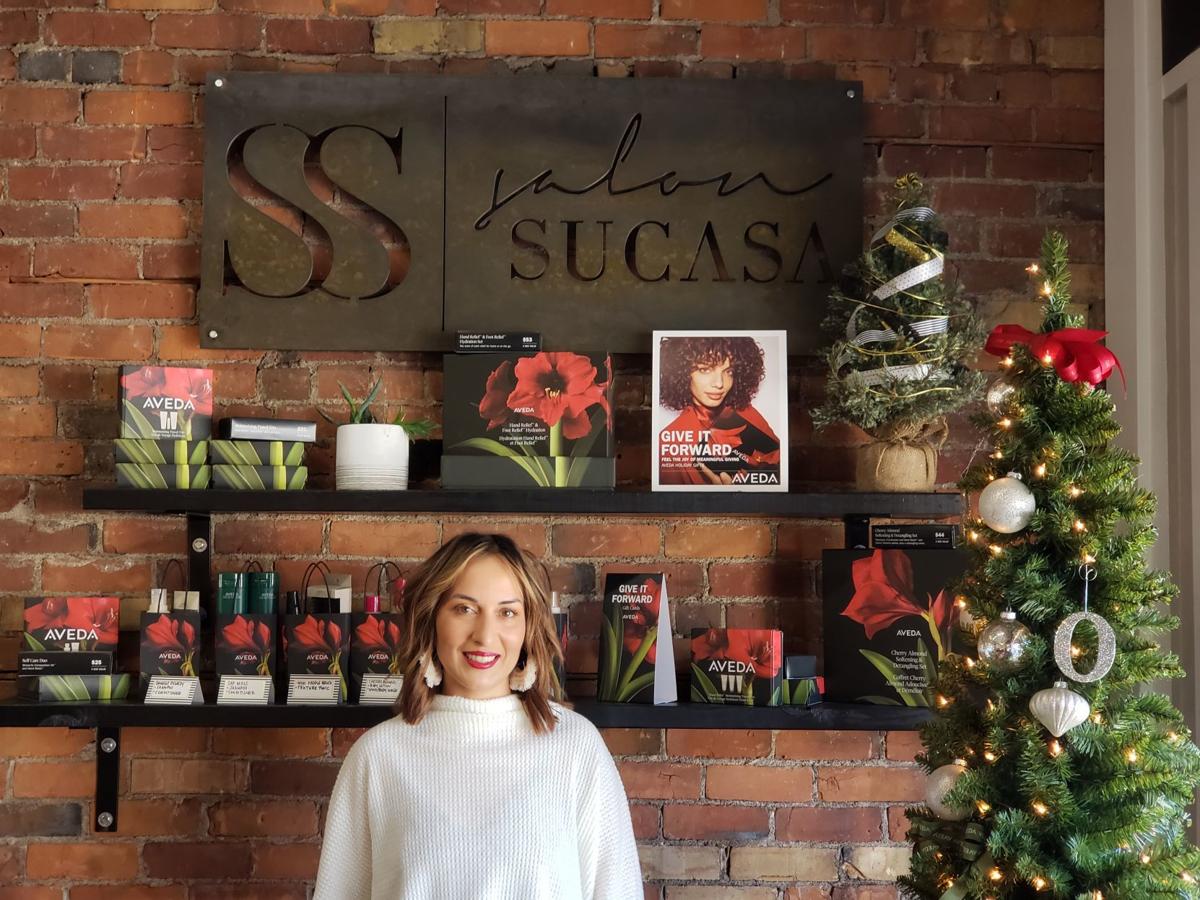 A vintage-style sign hangs from a seasoned brick wall at Salon Sucasa, where owner Sarah Shultz found the perfect setting for her now year-old salon. 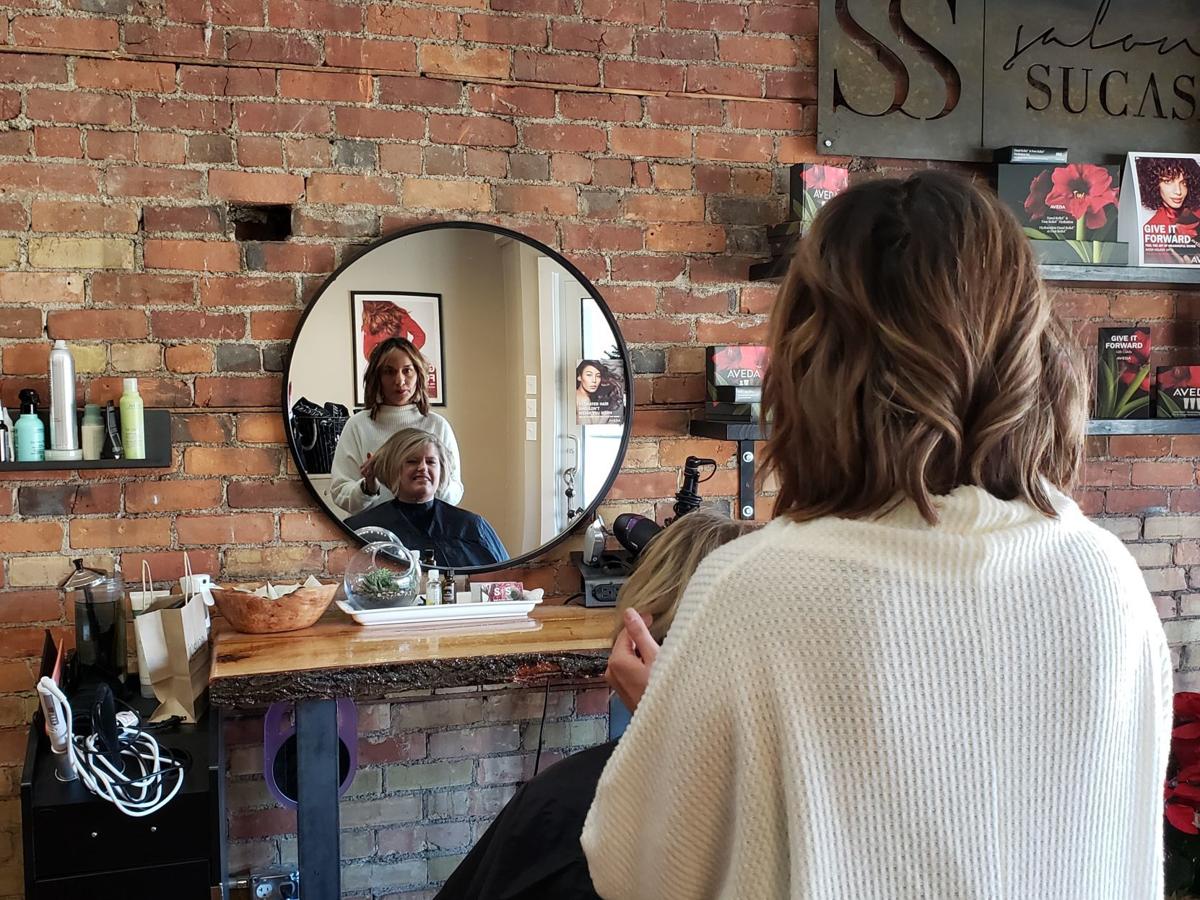 Sarah Shultz works with client Melanie Forrer of Payne, Ohio, at Salon Sucasa in Leo-Cedarville. Forrer said she has followed Shultz for 18 years.

A vintage-style sign hangs from a seasoned brick wall at Salon Sucasa, where owner Sarah Shultz found the perfect setting for her now year-old salon.

Sarah Shultz works with client Melanie Forrer of Payne, Ohio, at Salon Sucasa in Leo-Cedarville. Forrer said she has followed Shultz for 18 years.

A Grabill couple have purchased the Hair Candy, a salon in the final Fort Wayne home of Bun candy bars.

Troy and Sarah Shultz closed on the purchase of the property at 1501 E. Berry St. on Jan. 1.

The Shultzes are no strangers to such undertakings, having opened Salon Sucasa in Leo-Cedarville in December 2018.

Sarah Shultz said she worked at the Fort Wayne salon while she was preparing to open Salon Sucasa. And then Hair Candy became available “and we jumped on it,” she said. Hair Candy will be adding two stations to the Fort Wayne salon, which already boasts nine stylists. Shultz will continue styling at the Leo-Cedarville salon, but eventually hopes to serve clients in Fort Wayne one day a week.

Just over a year ago, Shultz saw the beauty in the dated building on Leo-Cedarville’s main street, and preserved the character of the building in creating Salon Sucasa.

“We had looked at strip malls and the other buildings to put a business in, and I love the restoration of the old buildings,” Shultz said. “I hate the idea of knocking down when you can save.”

She and her staff also work to accentuate aspects of clients’ appearance, instilling the confidence that flows from that attention.

“When I started (in styling), I didn’t have an idea what you would walk through with people,” Shultz said. “That’s one of the most gratifying parts of our jobs. They come in and they want to change. They want to feel better. They’re going through something. They look to us to pick them up and make them feel better.

“One client had zero self-confidence when she came in and when she left she cried, and she was so excited and grateful.” Shultz describes successful styling as putting the experience above function.

Salon Sucasa recently celebrated its first anniversary, an unreachable milestone for so many new businesses. “It was a huge undertaking. It was a big step,” she said. “If you’re not scared, you’re not growing.”

An open house soon after the opening allayed much of that concern. More than 200 people turned out to learn more and to show their support. “It was like a block party,” she said. Grace Geha of Gracey’s Goodies supplied baked goods. “She did an amazing job,” Shultz said. Family friend Pat Davidson of Moore’s Welding created metal signs consistent with the character of the building.

Since opening day, Shultz has heard stories of the building that now serves as the home for her business.

“My husband is a carpenter. I met him at art school,” she said. “I love the charm of the old buildings and keeping the history and reviving them, and to have the modern elements and the old character. The floors are original. The walls are original. We did uncover the brick. It was all covered up and as we chipped at the plaster it turned out just beautiful.”

“The ceiling is the original tin ceiling. The building needed a facelift,” she said. “People love it. It’s beautiful.”

“I love people coming in and telling me the stories of how old the building is,” Shultz said. “Someone said the brick was the old exterior brick and it came from Chicago. If that’s true, I don’t know. But it sounds good. There was a fire here over 75 years ago and as you go to the back it kind of turns black from the soot, and I wanted to keep it like that. It was an awesome characteristic.”

She found the name for the shop in her own Latin background. “Everyone has heard the phrase ‘Mi casa es su casa,’ which means ‘My house is your house,’ and this is my second home, so we want to welcome you to our home,” she said.

She considered another career before choosing styling.

“I grew up in Paulding, Ohio, and went to the Art Institute of Pittsburgh for photography,” she said. “I didn’t really think that was my path, so I came home and went to beauty school, and this is where I’m at.”

She feels that she is still involved in art. The color wheel mixes customized colors. “And haircutting is geometry. It’s making a sculpture out of something that it’s not,” she said.

Along the way, Shultz worked with Hair Candy on Berry Street in Fort Wayne. “And I loved them,” she said. “They were just amazing at carrying me through and helping me with what I needed to take on my own shop.

“I had done many roles, through becoming an educator and styling at New York Fashion Week. I did a magazine spread for Modern Salon from that, which is like the People magazine for hair.”

She said she has “a wonderful team” of stylists in place. “I was very selective on whom I chose for their talent and, of course, for their presentation as a person, too.” They are very respectful.” She takes pride in the cooperative atmosphere and in just getting along. “I’m kind of a hippie at heart,” she explained.

She said a salon gift certificate is an appropriate gift, discounting the suggestion that the recipient might interpret the gift as addressing a need. “Women love it,” she said. “I don’t think they take it the way that society would make it. It’s a gift that women sometimes struggle with paying for themselves. So yes, come in and get a gift certificate. She would love it.”

Client Melanie Forrer of Payne, Ohio, kept an appointment one early morning in December. “I have followed Sarah everywhere,” she said, listing stops in Ohio and at Hair Candy in Fort Wayne over a span of 18 years.