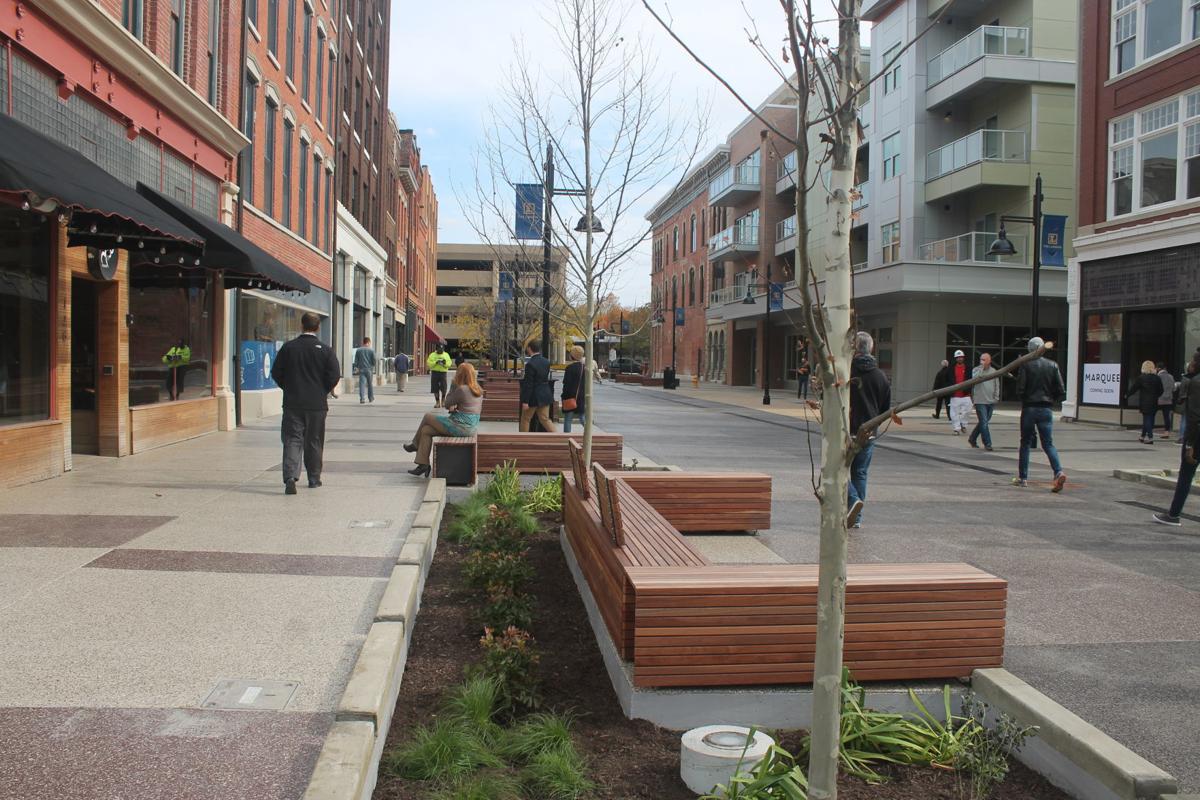 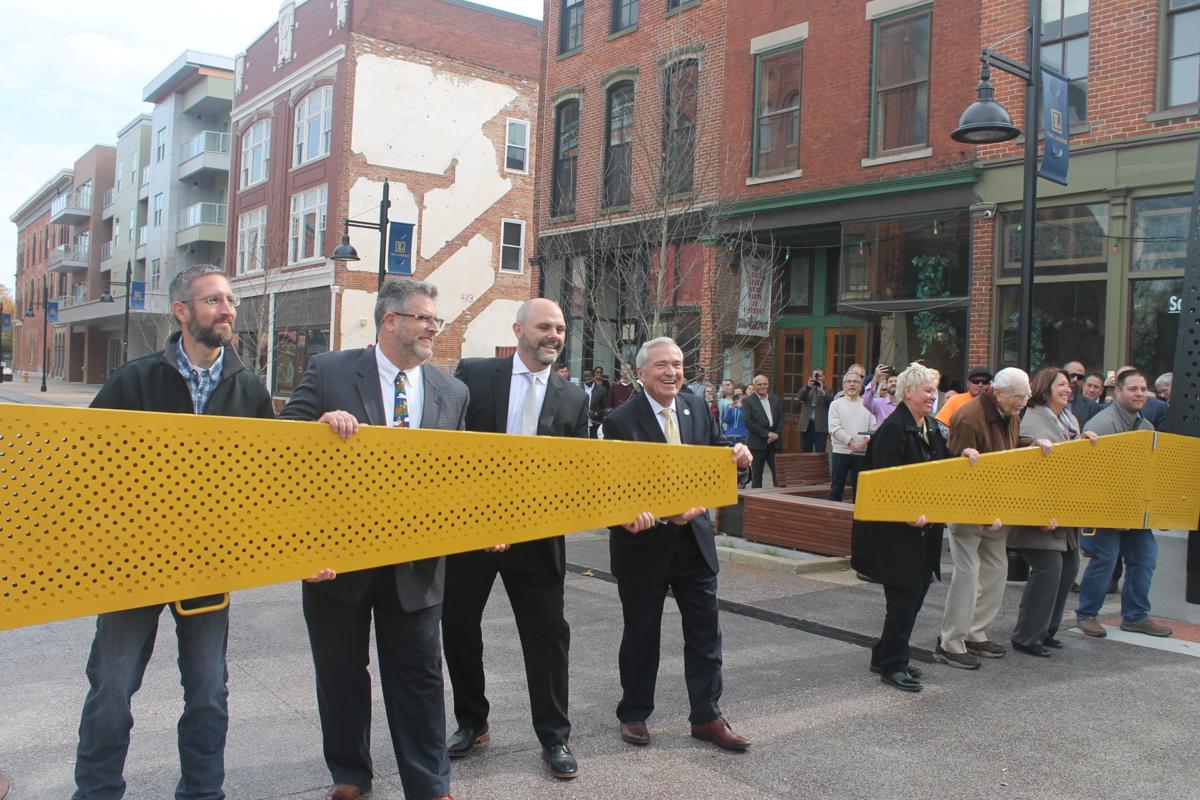 On Oct. 24, city of Fort Wayne officials celebrated the reopening of The Landing. This historic block has been redesigned as a mostly pedestrian-only corridor. Gates on either end of the block will remain closed most of the time, preventing vehicles from going through, but will open for delivery vehicles and for people moving in to the new apartments. 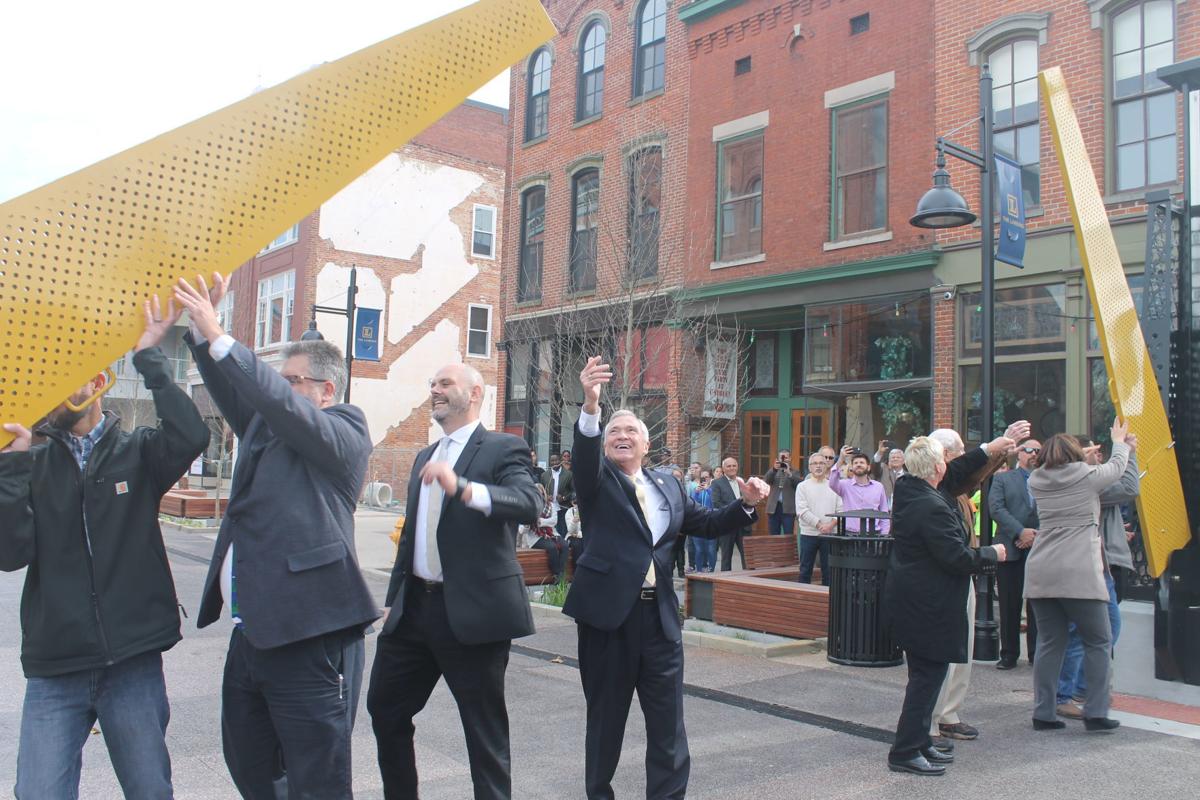 On Oct. 24, city of Fort Wayne officials celebrated the reopening of The Landing. This historic block has been redesigned as a mostly pedestrian-only corridor. Gates on either end of the block will remain closed most of the time, preventing vehicles from going through, but will open for delivery vehicles and for people moving in to the new apartments.

“The Landing has risen again!”

So declared Mac Parker of the Downtown Trust, which was tasked with raising funds to buy the seven buildings on Fort Wayne’s historic West Columbia Street.

On Oct. 24 city leaders and community members gathered at the intersection of West Columbia and Harrison streets to physically open the gates to the latest downtown renovation project. Once the hub of the city due to its proximity to the Wabash and Erie Canal and later the railroad, The Landing, as it’s commonly called, needed revitalization.

“We knew it had to be something special,” said Mayor Tom Henry, referring to its historic significance. When Fort Wayne citizens were asked on a survey what they wanted downtown, a common thread emerged. People wanted a gathering place, Henry said. They wanted a place where they could just hang out.

The city took it from there. While seven buildings were remodeled and one new building was constructed, the city worked on a new streetscape, one vastly different from what was there before.

The biggest and most noticeable change are the yellow gates at either end of The Landing, which are there to keep vehicles out. The gates will open to let in delivery trucks for shops and businesses and for moving vans used by people moving in and out of apartments. When the gates are open, traffic will be one way from east to west. “These gates will be closed most of the time,” Henry said.

The old curbs, sidewalks and asphalt were removed and replaced with a continuous stretch of architectural concrete, so the sidewalk is level with the street. New streetlights and banners identify the block as The Landing.

Large benches made of high-density wood located along the block provide areas for people to gather or just enjoy the view. New landscaping areas are slightly sunken, doubling as rain gardens.

Some improvements have been made that passers-by will never see. Underground, a new, 12-inch water main replaced a cast-iron main installed in 1910. A new stormwater line was installed, providing for the separation of sewer and stormwater.

The streetscape complements the rest of the work being done by the Model Group. The $32.2 million project includes the renovation of seven buildings and construction of one building. When the project is complete in spring 2020 it will include 70 apartments and 56,000 square feet of commercial and retail space. As of Oct. 24, 100% of the commercial spaces had signed leases or letters of intent.

Sorry, there are no recent results for popular images.