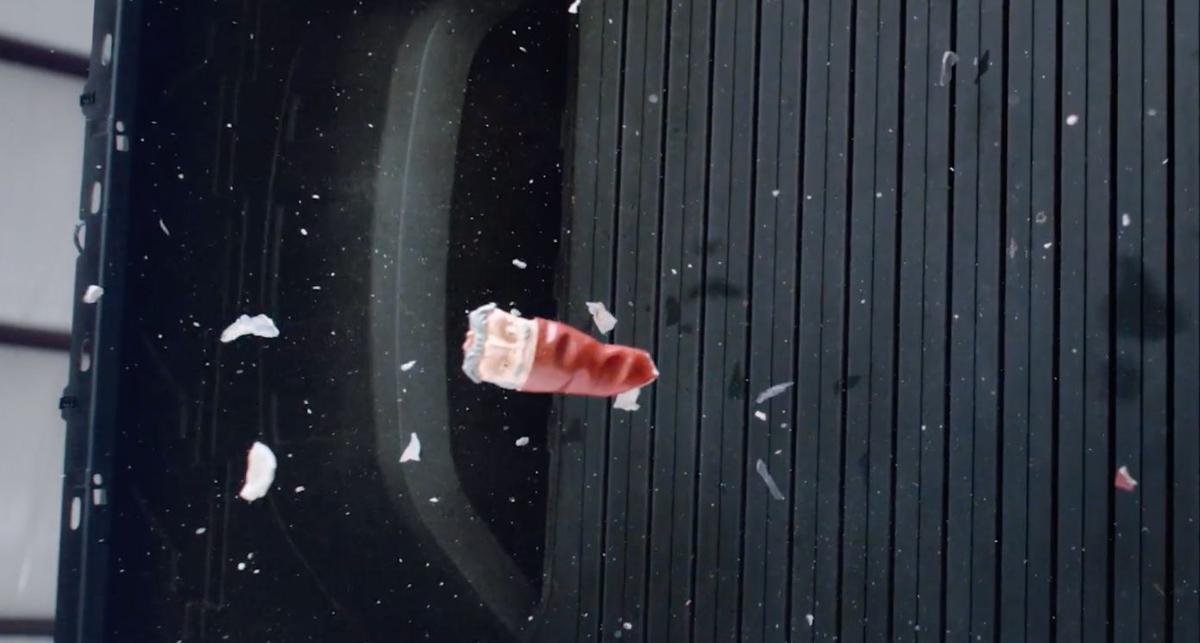 Objects including this garden gnome were hurled at hurricane speeds at the CarbonPro pickup bed, which withstood the abuse, according to a GMC commercial. 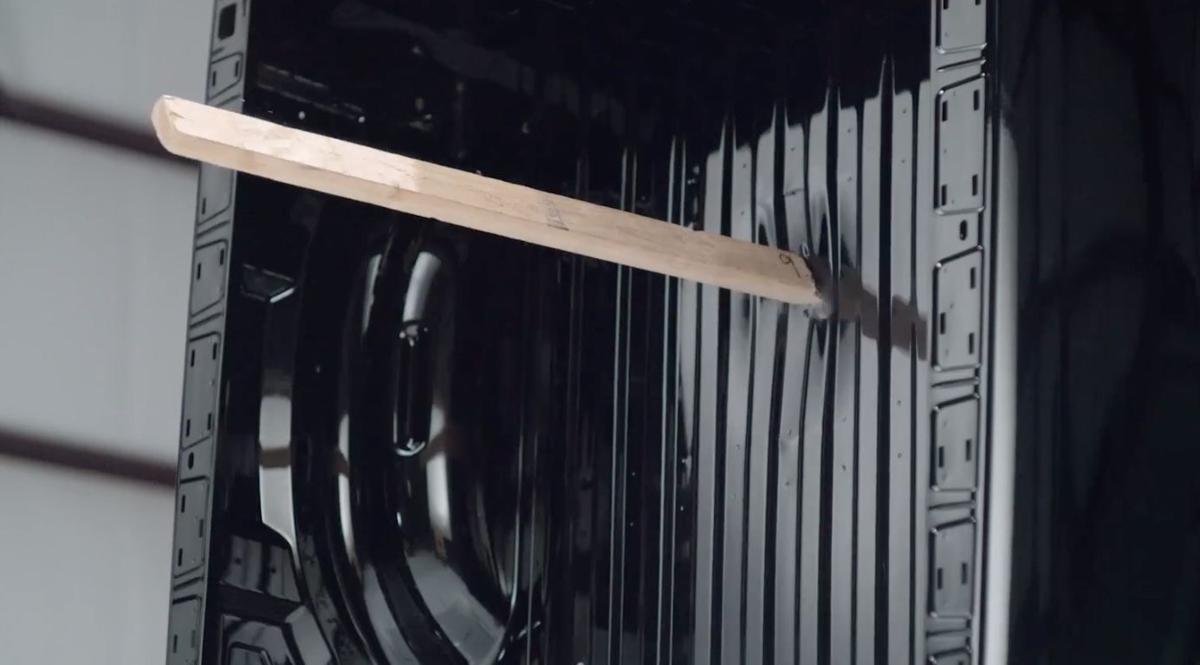 A competitor’s pickup bed didn’t fare so well. This two-by-four made a hole in it. 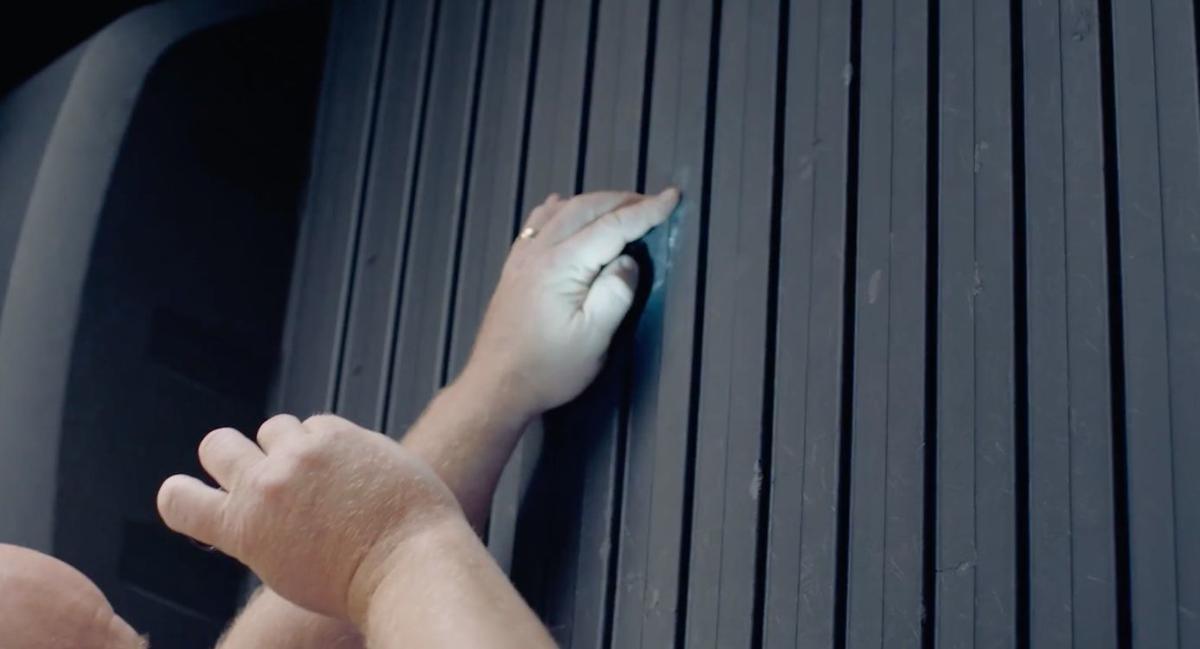 GMC engineer Mark Voss says he can’t even find a dent when a piece of two-by-four is hurled at the CarbonPro pickup bed.

Objects including this garden gnome were hurled at hurricane speeds at the CarbonPro pickup bed, which withstood the abuse, according to a GMC commercial.

A competitor’s pickup bed didn’t fare so well. This two-by-four made a hole in it.

GMC engineer Mark Voss says he can’t even find a dent when a piece of two-by-four is hurled at the CarbonPro pickup bed.

Watching things slam into a surface and explode without hurting anyone never seems to get old, especially with a rugged protagonist and the right background music.

General Motors Corp.’s locally built GMC Sierra is now starring in one of those scenes generating enough visceral appeal that it could have been shot under the guidance of a Hollywood action movie director.

It’s for an ad campaign promoting the impressive performance of the Sierra’s new CarbonPro pickup bed. The truck’s fortunes are important to northeast Indiana, as GM employs about 4,400 making Sierra and Chevrolet Silverado pickups.

To the tune of James Brown’s “Super Bad,” a 30-second spot shows a suspended Sierra truck bed withstanding the impact of objects during testing using Category-1 hurricane force projectiles, from construction materials to friendlier household cargo such as a sofa, watermelon and garden gnome.

“You probably won’t launch hurricane-force projectiles at your truck bed. But it’s nice to know you can,” a voiceover reassures. “Introducing CarbonPro. If it can handle a hurricane, it can handle you. Only on the GMC Sierra.”

There also is a video lasting two minutes and 39 seconds challenging competitors, entitled CarbonPro vs. Hurricane. What happens when the new GMC truck bed faces the ultimate test, it asks.

Ominous music plays as a severe-weather wind simulator at a Miami hurricane testing facility blows the roof and siding off a tiny house set up near it for demonstration purposes, then topples it and blows it into a nearby yard.

On the other side of the country during hurricane-projectile testing in Los Angeles, without disclosing the brand, the bed of a competing pickup is suspended on chains as a two-by-four, brick and rocks are shot at it using Category 1 hurricane-force speeds, denting, scratching and puncturing it.

“Holy cow. You see the brick basically went clear through,” said Mark Voss, a GMC engineer, peering through and then putting a hand through a hole created in the truck bed by a brick.

“This is definitely a structural failure,” he said.

The next scene shows how the Sierra’s CarbonPro stands up to the same punishment, with the projectiles bouncing off and barely marking it.

“Wow. No denting, no structural damage. I seriously have never seen anything like this in my entire life. This is incredible, absolutely incredible,” Voss said.

The video ends with the same closing lines as the 30-second spot, which national media reported was shot for airing during the NFC Championship football game.

“The CarbonPro bed is the world’s most dent, scratch and corrosion-resistant bed. It’s also 25 percent lighter than a steel bed, which benefits efficiency – bonus, it also eliminates the need for a bedliner, which adds even more weight to a steel bed,” said Stuart Fowle, GMC and Buick communications manager, in an email.

“CarbonPro proved too strong for our traditional battery of truck bed tests so the engineering team got creative, dreaming up new, more extreme testing,” he said.

Testing that didn’t make it into the videos included repetitive cinder block drops from increasing heights and 450-pound steel drums dropped in the bed.

Testers even ran a gas generator with the hot exhaust exiting right on the bed and also ran a snowmobile tread across it.

“It was this creativity that inspired our advertising team to send CarbonPro into a hurricane-force wind testing facility,” Fowle said. “We even brought along our competitors’ beds, as you’ll see in the long-form ad. The results speak for themselves!”

The CarbonPro campaign is designed to build on the Sierra’s position as the most premium and innovative truck on the market, he said.