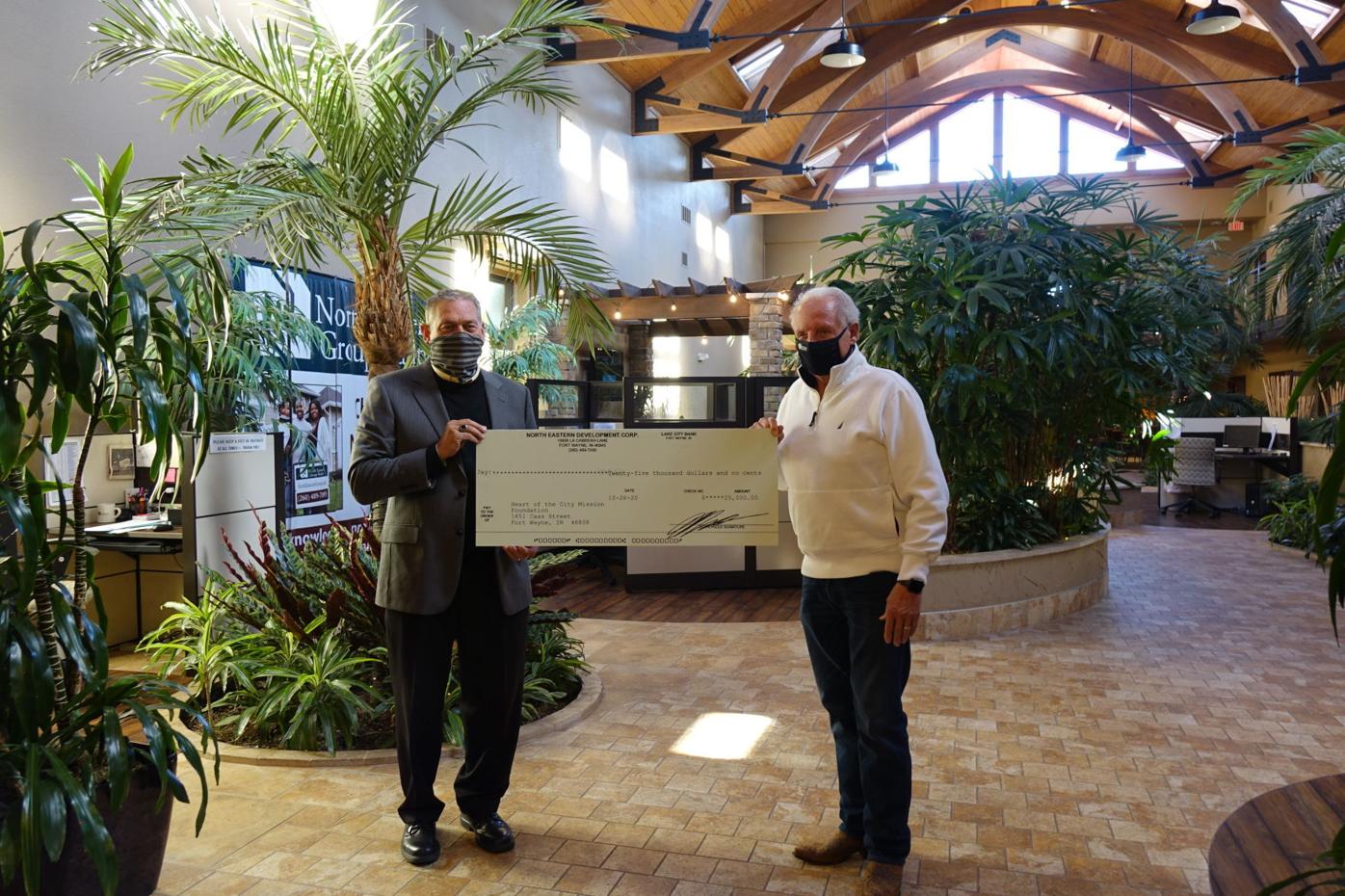 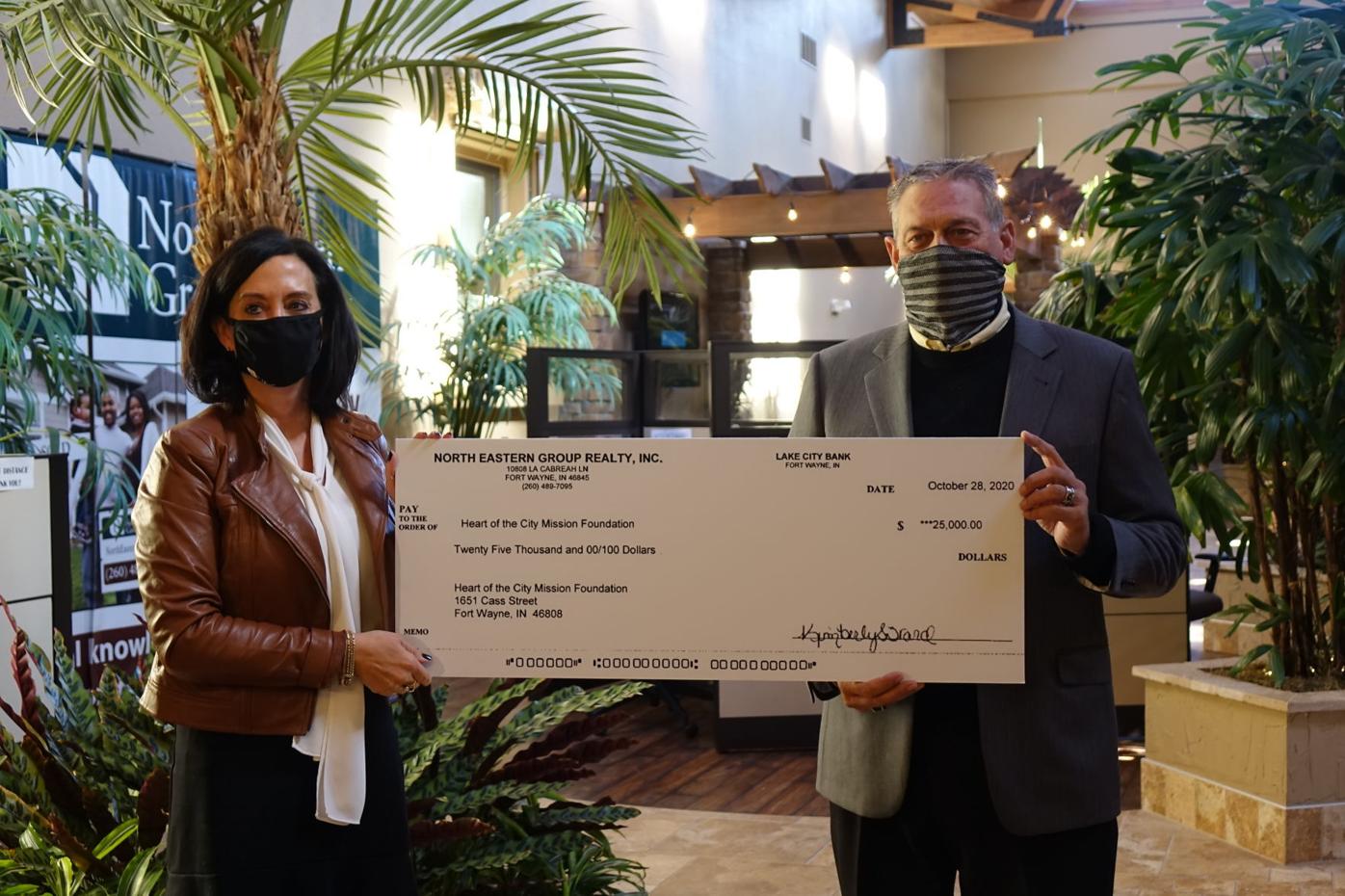 Kim Ward, president of North Eastern Group Realty, and Tim Stauffer, co-chairman of the Heart of the City Mission Foundation board, show the $25,000 that the realty group gave to the nonprofit.

Kim Ward, president of North Eastern Group Realty, and Tim Stauffer, co-chairman of the Heart of the City Mission Foundation board, show the $25,000 that the realty group gave to the nonprofit.

Some big hearts at the North Eastern Group are helping those who are homeless and in need through a donation to Fort Wayne nonprofit Heart of the City Mission Foundation.

With the COVID-19 pandemic, the North Eastern Development Corp. and North Eastern Group Realty planned a smaller-than-normal Christmas party for their clients and others.

“It will typically be 500-550 people, so it’s quite an effort, quite an expenditure,” Joe Zehr, founder of the North Eastern Group, said.

While planning to have a smaller party, both the development and realty groups asked employees if they’d support forgoing the party and instead donate the money to charity.

“Both groups said unanimously, yes, this of all years, make the contribution; we’ll forgo the party,” Zehr said.

Kim Ward, president of North Eastern Realty, said, “I think if I took a vote next year, (the 100 agents) may want to cancel their Christmas party always and give money to charity because they just feel really good about it.”

Heart of the City Mission Foundation board co-chairman Tim Stauffer on Nov. 17 collected two checks, one for $25,000 each from North Eastern Development Corp. and North Eastern Group Realty.

The $50,000 represents ⅔ of the nonprofit’s annual budget, about the same amount that it wasn’t able to raise when two of its fundraisers were canceled earlier this year, Stauffer said.

“Being able to have this money is really, really important to us,” Stauffer said. “...This generous gift from these two companies comes to us at a time that is just critical for our survival and for our well-being and for us being able to pour our programs into underresourced homes in the community of Fort Wayne.”

Heart of the City has two main programs. Its food rescue program collects unsold food at the end of the day from nearly two dozen Fort Wayne restaurants and coffee shops to take to homes and institutions.

Its other program receives bicycles from businesses and through a Fort Wayne Police Department partnership.

“We get the bicycles. We repair them. We work on them. Summit City Bicycles is able to give us parts at their cost. So through all that we are able to refurbish these bikes and put them back into the community for, primarily, the homeless community in Fort Wayne.”

Recipients earn the bikes by working a few hours in the bike shop or on another projects.

“If they work in the bike shop, they’ll learn a skill because they’ll spend 6 or 8 hours in there beside somebody who is a master craftsman. And they are able to learn how to use the tools and to replace a tire, fix the spokes, straighten a bent wheel, fix a frame. All that kind of stuff.”

The group, formed in 2010 as a not-for-profit umbrella for several existing, stand-alone inner-city programs, also has a counseling center, mainly for families, and a laundry facility, mostly for single mothers. It also has a food pantry at its building at 1651 Cass St.

Zehr has a strong connection to Heart of the City’s work.

After 55 or 60 years, when Amos and Elizabeth Zehr couldn’t continue, Heart of the City took over the programs that the couple founded inside the Fort Wayne Rescue Mission in 1948.

For more information about Heart of the City Mission Foundation, send email to heart.cityfoundation@gmail.com, call 260-413-7920 or 260-415-7733 or visit HOTCfw.org. For information on the North Eastern Group, visit northeasterngroup.com.