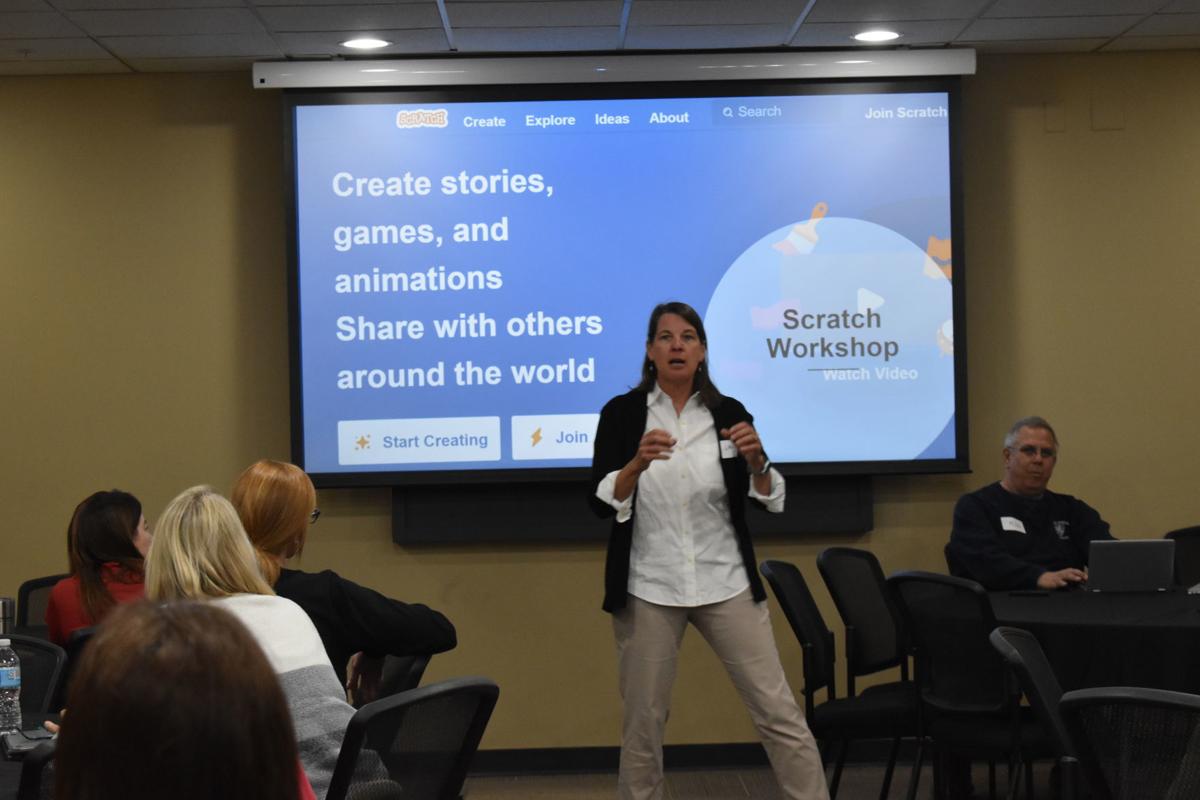 Laura Smith explains how the Scratch program can get students’ creativity going. 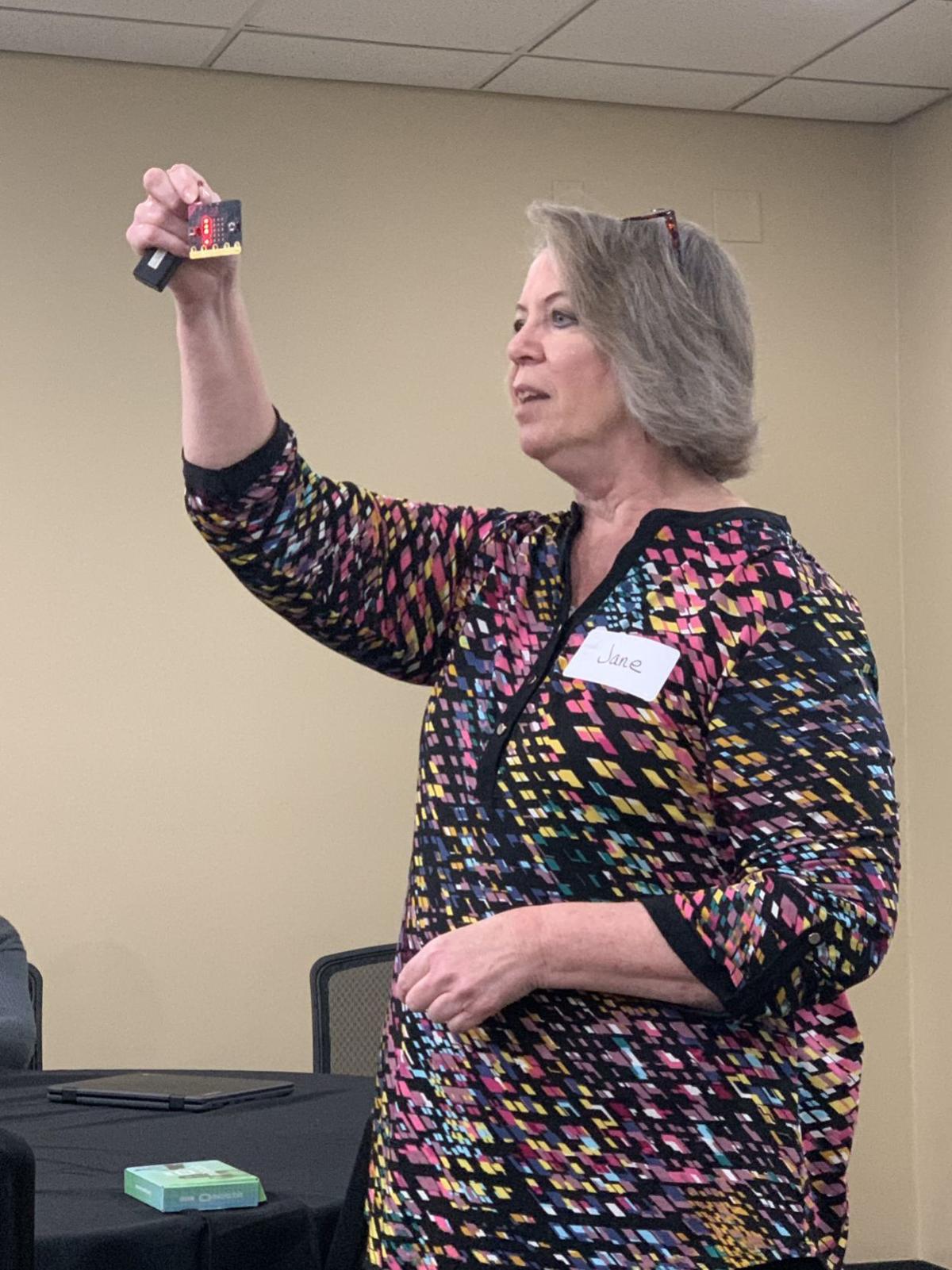 Jane Gorman holds up a bot that was programmed to send a message to shake it so that it acted like the Sorting Hat in the Harry Potter novels. It would then produce a message in lights about which house the user was sorted into.

Laura Smith explains how the Scratch program can get students’ creativity going.

Jane Gorman holds up a bot that was programmed to send a message to shake it so that it acted like the Sorting Hat in the Harry Potter novels. It would then produce a message in lights about which house the user was sorted into.

Trent Kumfer, training and development supervisor at Columbia City’s 80/20 Inc., has seen it happen. A new employee doesn’t care why he needs to perform a certain action; he just wants to do it.

“I’ve literally had people tell me... No, it’s fine. I don’t need to know why. Just tell me what button to push,” Kumfer told middle school teachers participating Feb. 25 in a MakerSpace training day.

Businesses like 80/20, which calls itself “The Industrial Erector Set” for the T-slotted aluminum framing it makes for a variety of industries, including aerospace and automotive, are looking for employees who can be problem-solvers and team workers. After a year of employment, employees become part owners in the business. That gives them a different perspective on how the business is run. After learning that the average monthly electric bill for the company is $45,000, an employee pointed out that areas like the bathrooms and meeting rooms had lights on all the time.

MakerSpace is using a grant from the Schwab Foundation to the Make It Your Own collaboration to provide teachers with training, books and items such as the Makey Makey invention kit to get students thinking through problems, using their creativity and collaborating with others as part of Science, Technology, Engineering, Arts and Mathematics or STEAM, education.

Region 8 Education Service Center, 1027 W. Rudisill Blvd., Fort Wayne, partnered with the Northeast Indiana Regional Partnership, Ivy Tech Northeast and Junior Achievement for the grant, according to Joshua O. Wenning, Region 8 executive director. The MakerSpace grant is $120,000 for 2019-20 and the same amount for 2020-21.

Middle school teachers from around the area including Fremont and Wawasee came for one of two days of training held Feb. 24 and 25 at Region 8. Seated at round tables, the day included hands-on instruction and collaboration.

On a screen during a learning session for the teachers, a student named Natalie talked about using a program to create a game that used her artwork to have a puppy walk and collect items.

“I never thought I could do the coding part,” Natalie said.

“Did she learn how to learn?” Laura Smith, a retired science teacher and now a consultant, asked the teachers. “There wasn’t anyone teaching her.”

Teachers don’t need to have all the answers, said Christine Riley, a consultant with the group. Their role is to act as coaches and ask students what they see as the possibilities.

Programs developed by MIT Media Lab’s Lifelong Kindergarten group such as Scratch are getting students to use their imaginations to think through ways of creating projects and also using other students’ creations that they can alter to suit their own needs. If someone creates a character that’s green and jumps up and down, another student could alter it to a red character that moves side to side, Smith said.

“It’s not coding to code,” Michael Gorman, CEO of 21centuryedtech, LLC and another consultant, told the group. “It’s coding to learn.”

Gorman said he had visited Warsaw’s Zimmer Biomet, which needs marketing people to understand the whole design of a project and employees who can come midway into a 4- to 5-year-old development of a product.

“It’s not about them; it’s about the project,” Gorman said.

England has given every seventh grader a microbot, a small robot with sensors that looks like a square that can be programmed for a variety of uses from simple lighted messages to controlling music players. Jane Gorman showed it to the teachers. By shaking it, the red lights came on to send a message that it was like the Sorting Hat in the Harry Potter books. It said the holder was being put into the Gryffindor House.

Teachers shared how they’ve — or rather their students — have used the programs and kits.

Sarah Koch, a former chemist who has spent the last seven years in her second career as a science teacher and is at Fremont Middle School, described how the students could use copper tape to set up a gate for toy cars and calculate the speed by determining the time between the gates. She was learning new things at the training.

“I never thought (with the Scratch program) of modifying others’ work that was already there,” Koch said.

Ryan Edgar of Wawasee, said his class had completed their work before the trimester was over, so he gave them the items he’d been given through the grant and let them have at it. He gave them two days to explore the tools and another day to demonstrate to others what they’d created. Some using Sphero could use their phones to control a bot and a girl with Makey Makey was designing a sort of piano.