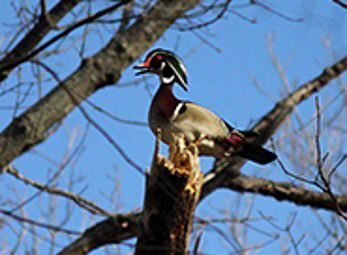 Lana Lee of rural Steuben County is an avid nature photographer. This picture of a wood duck, along with images of swans, a beaver and an eagle captured by Lee’s lens, will be on display at the new 3Rivers Federal Credit Union branch in Angola, slated to open in December.

This 101 Lakes Country-inspired painting by King Oberlin of Angola is among select pieces of art that will be on display at the 3Rivers Federal Credit Union when it opens in Angola.

Lana Lee of rural Steuben County is an avid nature photographer. This picture of a wood duck, along with images of swans, a beaver and an eagle captured by Lee’s lens, will be on display at the new 3Rivers Federal Credit Union branch in Angola, slated to open in December.

This 101 Lakes Country-inspired painting by King Oberlin of Angola is among select pieces of art that will be on display at the 3Rivers Federal Credit Union when it opens in Angola.

3Rivers Federal Credit Union’s arts initiative aims to purchase native artwork for all of its branches.

“We love supporting our local creative community and are honored to feature the artwork, with plaques displaying artist bios, in our branches,” said Mary Moore, 3Rivers project coordinator. “The Angola branch, which we anticipate to open yet this year, will feature over 30 works of art throughout the branch from 15 different local artists.”

The art, in a variety of mediums, was purchased from area artists that include Sandra Baughman, Bill Eyster, Lana Lee, King Oberlin and Doug Fiely. Fiely is an Ohio painter who displays his work at 4 Corners Gallery Studio and Oberlin has made a name for himself with his wide, colorful strokes. Each has his own unique style honed over years of fastidious creativity.

“We commissioned works of art such as a large original painting of the Potawatami Inn from Lynne Liechty (a Steuben County commissioner) and paintings of Angola-area wildlife from Amanda Dornbush,” Moore said. “We purchased two paintings from RISE Easterseals in Angola as part of their Just Be Artistry program, several pieces from 4 Corners Gallery Studio & Pottery and The Bent Fork Art Studio, and other pieces directly from the artists themselves.”

“Meeting the artists and curating the artwork was a delightful experience and great way to get to know folks in the Angola community,” said Moore.

“I’m good on the lake shots but don’t have that much wildlife stuff, so I contacted Lana. She came through with some nice shots,” Eyster said. Three large Eyster scenes will be on display along with four up-close photos by Lee — swans, a wood duck, a beaver and an eagle.

Moore’s travels also led her to Angola City Hall and Davis, downtown services coordinator and an artist herself. Moore said she recalled Davis from her winning an award for arts advocacy at an Arts United function in Fort Wayne last year.

“I reached out to her to ask for artist recommendations in the area,” Moore said. “I work in project management but because of my passion for the arts, 3Rivers has encouraged and empowered me to continue to build relationships in the arts community.”

The art will be installed in the near future with the branch expected to open in December. 3Rivers currently serves more than 1,000 members in Steuben County.

‘We are excited to better support them and their financial wellness, and make a positive impact in the community,” Moore said.

The new 2,800-square-foot facility is located on a 4-acre lot on Wendell Jacob Avenue near Meijer. Construction on the $1.7 million project started in the spring. Strategic Growth Advisors of Fort Wayne is overseeing the design and construction

“The new branch will feature an open concept, with separate rooms for use by business, mortgage and investment services in addition to a drive-through and standalone ATM,” said a news release from 3Rivers. Upon completion of the Angola financial center, 3Rivers will have newly built or remodeled all 17 of its Northeast Indiana facilities, investing nearly $33 million since 2012.

“Our expansion will also support our existing business partnerships — from real estate to small businesses and nonprofits,” 3Rivers President and CEO Don Cates said. “Moving to Steuben County has been a long time coming and we’re appreciative of the excitement folks have shared with us. Our team is ready to make an impact and invest in the success the community.”

Angola’s is the 15th 3Rivers branch to feature locally created works of art. The credit union invested more than $8,000 in the Angola collection.