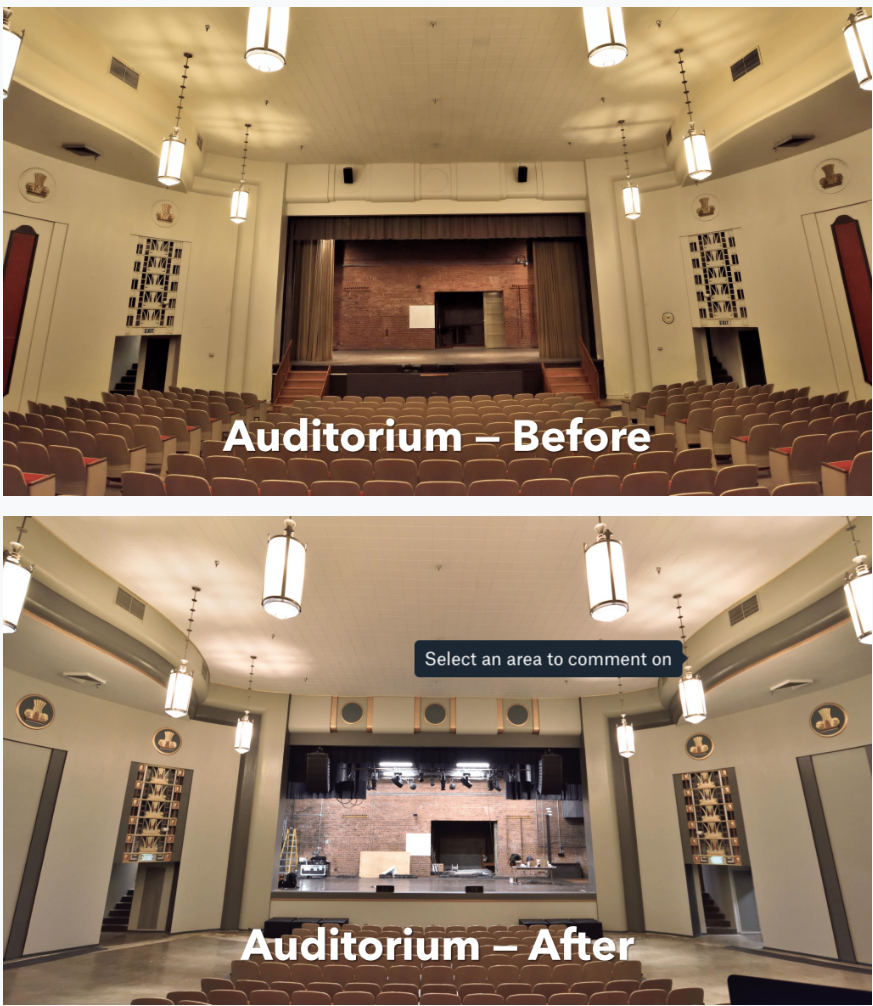 The Community Learning Center in Kendallville will use its renovated auditorium not only as a performance venue but a classroom where students would learn how to operate the equipment. 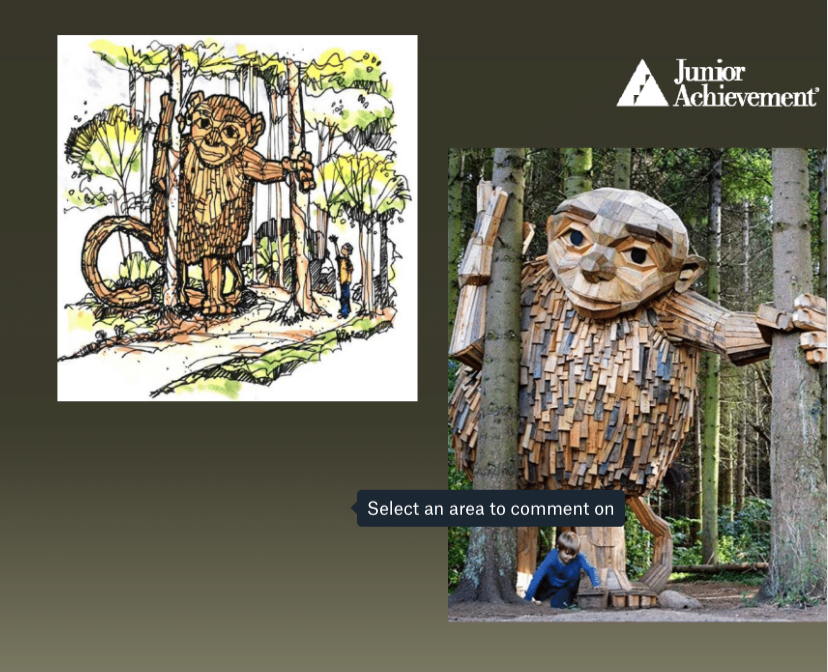 Junior Achievement wants to create a walking path with giant sculptures made from recycled materials.

A $3.6 million project would create two clusters of ball fields in Decatur. 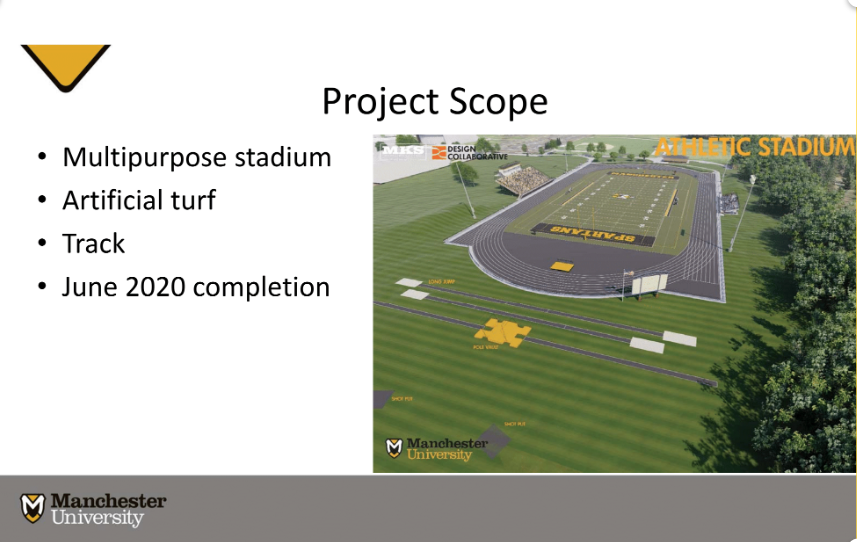 Trine University is building a stadium that could be used by school sports team from throughout the region. 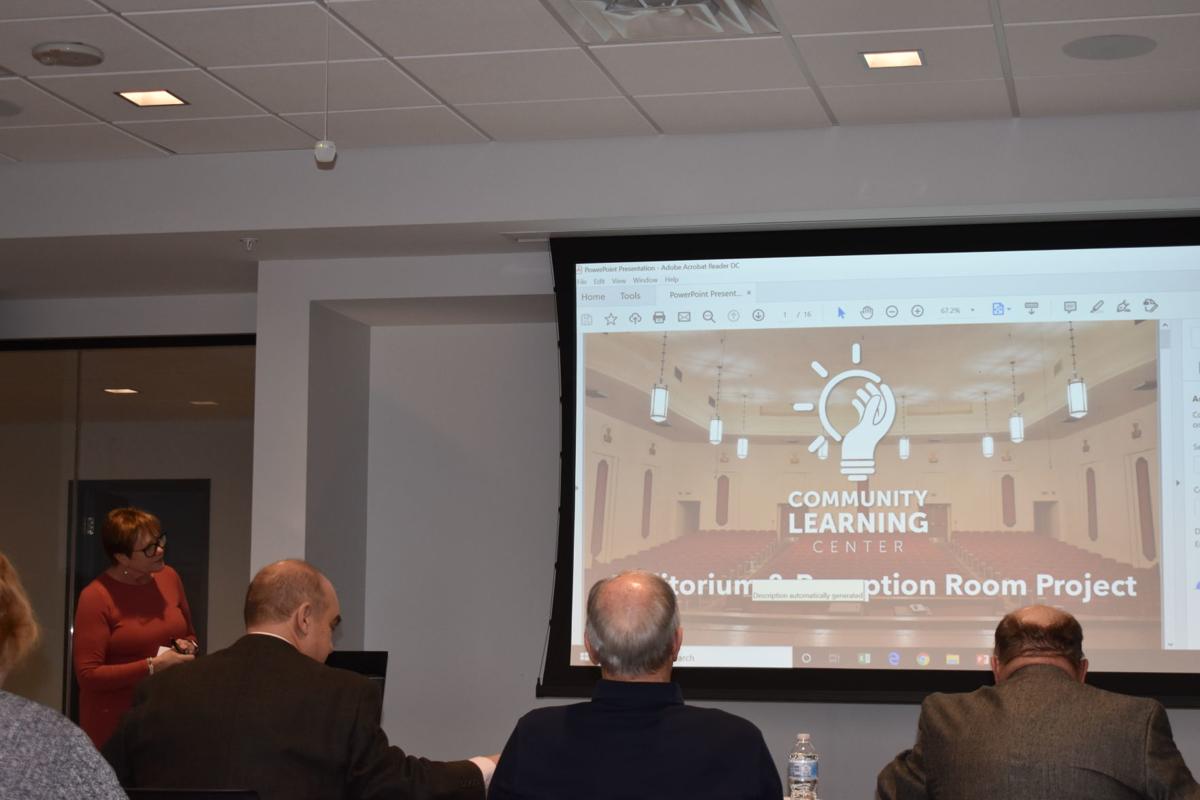 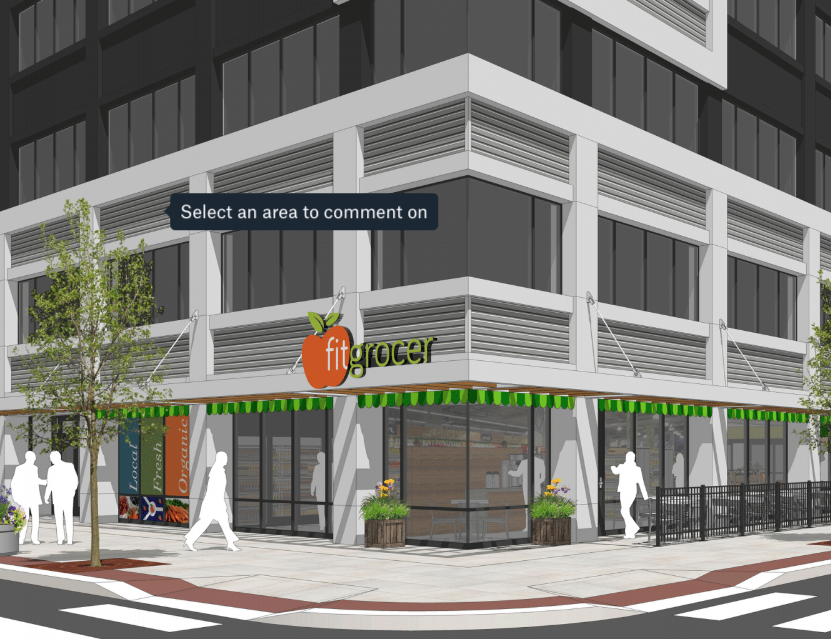 The Community Learning Center in Kendallville will use its renovated auditorium not only as a performance venue but a classroom where students would learn how to operate the equipment.

Junior Achievement wants to create a walking path with giant sculptures made from recycled materials.

A $3.6 million project would create two clusters of ball fields in Decatur.

Trine University is building a stadium that could be used by school sports team from throughout the region.

Northeast Indiana Regional Development Authority members have a daunting task ahead of them in choosing which of nine applicants for housing, trails and other community programs will receive $250,000.

The board heard presentations from each group during its meeting Jan. 14 at its Fort Wayne office, 200 E. Main St., Suite 910.

The authority originally awarded $42 million in state money to groups in the 11-county region to make transformative projects to help get the number of residents to 1 million. All but a couple of the original 24 projects are completed, including renovations to Fort Wayne’s Clyde Theatre, the DeKalb County YMCA in Auburn and Angola’s Trine University.

In November, the RDA announced that it had $250,000 left and put out a call for project proposals. The money comes from savings earned from past projects, investment on deposits, and higher-than-projected returns for tax credits, and must be allocated by March. Four of the nine applicants asked for the full $250,000, while others asked for $75,000-$183,000.

Board members will meet in executive committee Feb. 4 and are expected to announce a decision on allocation of the final money at their 2 p.m. Feb. 11 meeting.

Here is a look at the projects presented:

Julia Tipton, executive director, explained how the money would go to the renovation work for the center’s auditorium-reception room project. Housed in a building that originated as a school in 1915 with an auditorium added in 1938, the center is designed to be collaborative and multigenerational, Tipton said. The ongoing project will help with career development. The center has $5.7 million for renovation work throughout the building, with about 500 visitors the previous weekend at an open house to view the work. The auditorium — designed by A. M. Strauss, who also was architect for many Fort Wayne projects, including the Embassy Theatre and Lincoln Bank Tower — and creation of the reception room will cost over $1 million. Sweetwater has served as a consultant and donor to make the auditorium state-of-the-art, Tipton said. While serving as a performance venue, it will create opportunities for students to learn to operate the equipment, and hopefully stay in the community. It would also create a place for performances that could draw visitors from Fort Wayne and other places. The center would use most of the money to update the auditorium’s seating. The project should be completed around Feb. 17.

Imagine your child hopping into the pouch of a giant kangaroo sculpture made out of recycled materials as you spend some leisure time on a half-mile walking trail.

JA wants to turn a woods and wetland area by its new headquarters on Coldwater Road at Wallen Road into a regionally unique recreational opportunity featuring eight sculptures made from recycled materials representing animals that live at the Fort Wayne Children’s Zoo. JA, which teaches finances to children, represents 30 counties and hopes to start the project, costing $713,500, this year.

The park is a place that generations of Decatur residents have used to watch children’s ball games or to have a picnic. Over the years, ball fields have been added in a haphazard way, resulting in them being spread out and some far from bathrooms and concession stands. The $3.6 million project would create two clusters of three ball fields each. The money from RDA would also allow organizers to put back lighting into the first phase of the project. This would allow the community, which has created an annual sculpture walk and developed lofts aimed at artists in residence, to attract more artists. A basketball court and splash pad are possibilities for the future, said Decatur Mayor Ken Mayer, who attended the presentation.

One thing that the region needs more of is workplace housing. Kosciusko County, home of Warsaw, the “orthopedic capital of the world,” is getting $1 million from Zimmer Biomet to create housing needed for its workforce as part of a project with Indiana Housing & Community Development Authority. However, many developers won’t put money into the pre-development phase of architectural, engineering and legal work. The fund would provide up to $25,000 in a one-to-one match for those services.

The project may only encompass 0.3 mile, but it’s a gap in what would be 80 miles of connected trails. The trail would run along one of the largest neighborhoods in the city and connect to areas by medical businesses as well as Parkview Regional Medical Center, said Dawn Ritchie, city of Fort Wayne greenways manager. The project costs about $747,000. So far, four of six landowners have agreed to donate their land and REMC has agreed to move 10 poles, that contain utilities for four fiber-optic companies. The RDA previously provided $1.77 million to build 8 miles of the Pokabache Trail connector, or Pufferbelly Trail, which will connect four counties from Steuben County’s Pokagon State Park to Wells County’s Ouabache State Park.

Funding the stadium would not only help athletes on the school’s sports teams, but would help build school spirit and provide a track where high school teams from throughout the region would compete, said university president Dave McFadden. The school is also adding a marching band, the Manchester Regiment. Construction has begun on the $3.6 million project and should be completed in midsummer. “Manchester is a talent pipeline for the region,” he said. Its goal over the next decade is to become a multicampus regional university.

David Buuck’s nonprofit for Customizable, Affordable, Sustainable, and Safe living arrangements for individuals with developmental and/or intellectual disabilities is designed to promote independent living skills. “No one in the nation is doing what we’re doing,” Buuck said. Too often he hears from elderly parents who are hoping they outlive their children because they either can’t secure a Medicaid waiver or don’t want to put their children into a group home. CASS has different models of services: independent living with three suites, a common area and a steward in his or her own three-bed, two-bath space; family living with a steward living in the home; and family-plus for those with medical complications that need 24-hour care. Since opening the first independent living home a year ago and breaking ground on a second in November, CASS now has 18 building sites with a few streets between them behind Turnstone Center For Children and Adults with Disabilities, thanks to donors. Plans for the $1.1 million project call for demolition of the homes there and the construction of two homes per lot. He has 200 families on a wait list and has received interest from people from 22 states. “If you are trying to attract or retain high-quality talent, and they’ve got a loved one with a disability, their first question is going to be, ‘What do you have for my loved one?’”

An initial $323,000 grant from the RDA helped the center open in May 2017. Since then it has trained over 175 students, Isaac Lee, executive director of Steuben County Economic Development Corp., said. Its industrial space has classrooms, CNC machines, welding equipment and training spaces. This second phase is a $668,260 project focused on building a 6,000-square-foot co-working space. It will be “a great place to start a business and grow,” Lee said. Fifty 2-bedroom units to provide affordable housing for artisans are going up behind the center, thanks to a tax abatement from Angola on the land. That $8.2 million project will provide a feeder to the co-working space planned in the Enterprise Center. Demolition work would begin later this year and be completed next year.

Wabash-based insurer INGUARD plans to provide a source of healthy food with a downtown grocery in Fort Wayne. It also will move its grocery in Wabash’s “fast-food alley” on Cass Street to downtown, said Derek Self, director of strategy. The $1.03 million project is an investment in health while helping alleviate a food desert. The Fort Wayne grocery, which would offer memberships but be open to the general public, would get food from the same suppliers as Trader Joe’s and Whole Foods. Its food choices would include meat and dairy. It would also have a cafe with a full-time chef for lunch and dinners and “lots of smoothies,” Self said, and a $4 hot bar lunch to INGUARD members. Employer-subsidized memberships are $10 per month. It also would sell personal care products. Construction on the Fort Wayne grocery is set to begin the middle of this year.

Sorry, there are no recent results for popular articles.

Sorry, there are no recent results for popular images.