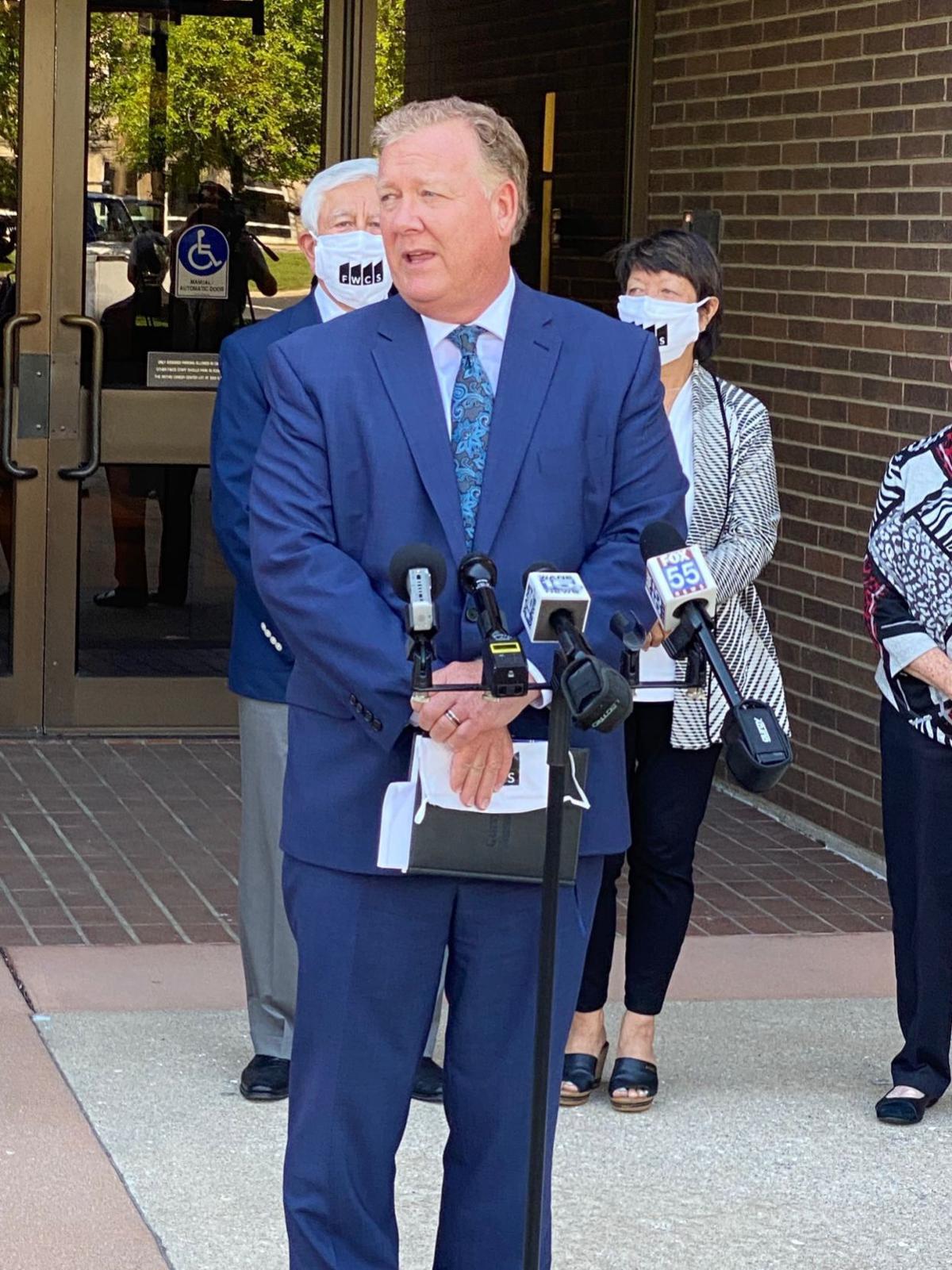 Mark Daniel addresses the media outside the Grile Administrative Center, 1200 S. Clinton St., Fort Wayne. The Fort Wayne Community Schools Board of Trustees selected Daniel as the district’s next superintendent. 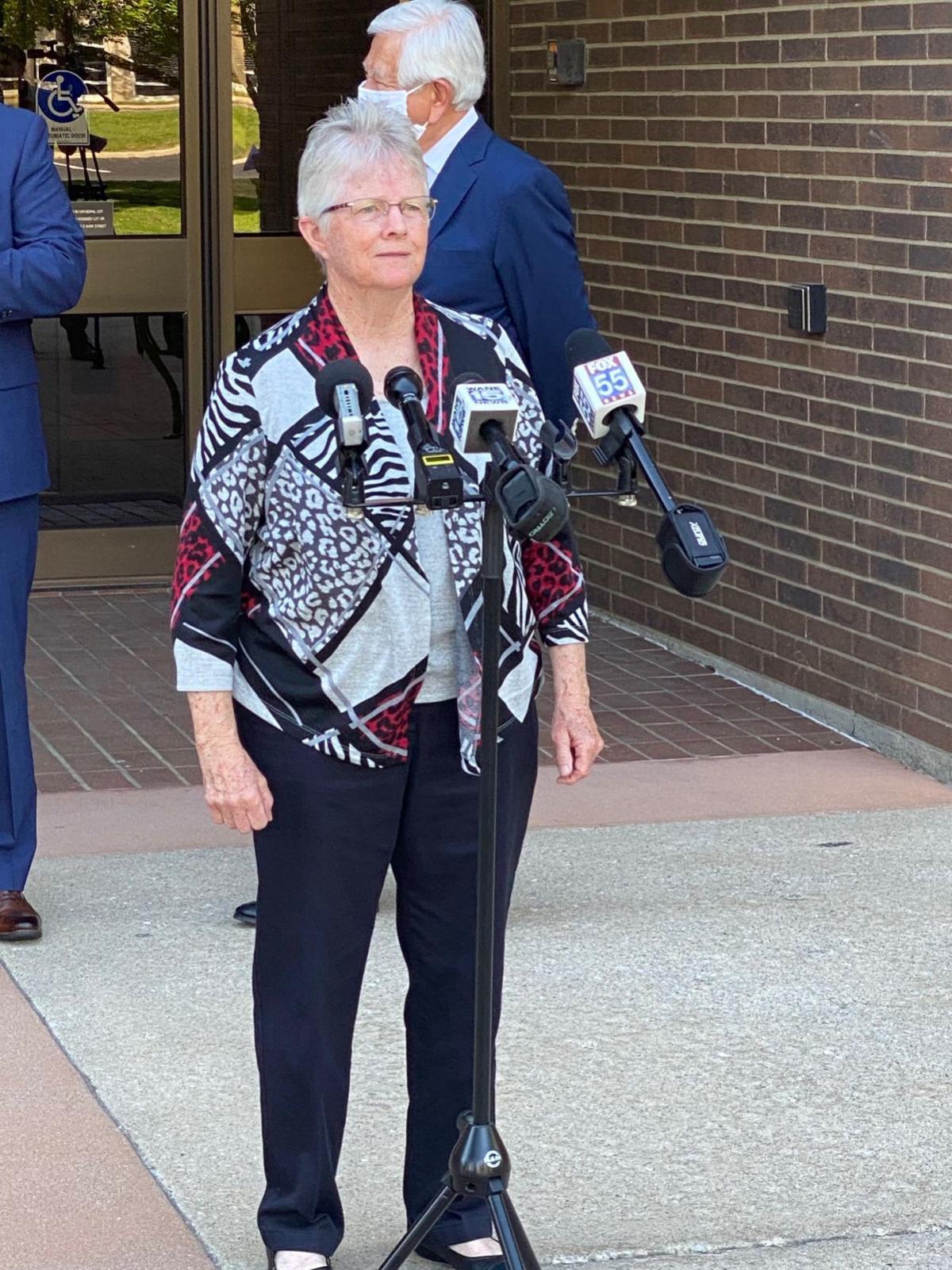 Mark Daniel addresses the media outside the Grile Administrative Center, 1200 S. Clinton St., Fort Wayne. The Fort Wayne Community Schools Board of Trustees selected Daniel as the district’s next superintendent.

In a ceremony worthy of the odd times of 2020, Fort Wayne Community Schools introduced the public to the district’s next superintendent May 26.

In a news conference held in the warm spring air outside the school system’s Grile Administrative Center — to guard against COVID-19 exposure among FWCS employees and media members — Mark Daniel was announced as the next chief administrator.

A Fort Wayne native, Daniel becomes the 15th superintendent to lead the system. He takes the mantle from Wendy Robinson, who worked in the system for more than 47 years, the last 17 as superintendent.

Before a group of about 15 local journalists and several school administration workers — many of whom were wearing FWCS-logoed face masks — Daniel acknowledged he owed a lot to his predecessor.

“You don’t replace a person such as Dr. Robinson,” Daniel told the crowd, “you merely stand on her shoulders. And I’ll be turning to her often for advice.”

The hire actually brings Daniel home. He was a 1979 graduate of North Side High School, and took his first teaching position at the Fort Wayne school, too.

He left North Side in 1995 to take a job as assistant principal at Leo Junior-Senior High School. In 1998, he ascended to the job of principal at Leo, a job he kept for 12 years.

In 2010, Daniel moved to Dowagiac, Michigan, to assume the post of superintendent for that area’s school system, a K-12 district with about 2,400 students.

In 2014, Daniel was hired to chief the McLean County Unit District No. 5 in Normal, Illinois, a K-12 system that comprised more than 13,000 students.

The search for Daniel began late last year after Robinson announced her intended retirement this summer. Shortly thereafter, the board engaged in a national exploration for her successor, hiring the search firm Hazard, Young, Attea and Associates to help identify potential candidates.

The board received 23 applications for the job from around the country, and interviewed six candidates in early April. Three of the candidates, including Daniel, were brought in for a second interview in late April.

Because of the COVID-19 gathering restrictions, the board had to conduct much of its search and interview process virtually, a hurdle that made the hiring process significantly more difficult, said FWCS Board of Trustees President Julie Hollingsworth.

“This is the first time we’ve ever met in person,” Hollingsworth noted with a smile at the news conference.

“Mark (Daniel) will be able to bring new ideas to the district but also has an understanding of our community — as well as the strengths and challenges of our school district,” Hollingsworth said. “He has proven success in collaborating with teachers, administrators, support staff, students, parents and business and community leaders. These characteristics convinced the board that Dr. Mark Daniel is the best person to lead FWCS, both to build on its success and to drive increased student performance.”

“Dr. Wendy Robinson has successfully led FWCS through the turbulent times in Indiana for K-12 education,” Hollingsworth continued. “Through the introduction of vouchers, increased promotion of charters, state budget cuts, tax caps, constantly changing accountability and a legislature determined to demean teachers, Dr. Robinson has expertly managed FWCS through every crisis and put FWCS in a position to meet its next challenges. The board is grateful to Dr. Robinson for her passion, commitment to our community, and her leadership.”

Officially approved by the school board May 26, Daniel’s three-year contract will give him a base salary of $215,000 a year, plus an opportunity to earn a $10,000 bonus if his performance is rated by the board as “effective” or “highly effective.”

Daniel will officially assume the job July 1, the day after Robinson retires.

“I have been a classroom teacher, coach, athletic director, assistant principal, principal and superintendent, I have a global perspective of what it means to educate each student to achieve personal excellence,” Daniel said. “Being an administrator in three states, I have gleaned best practices for pre-K through 12th grade that I’ll be able to bring to FWCS.”