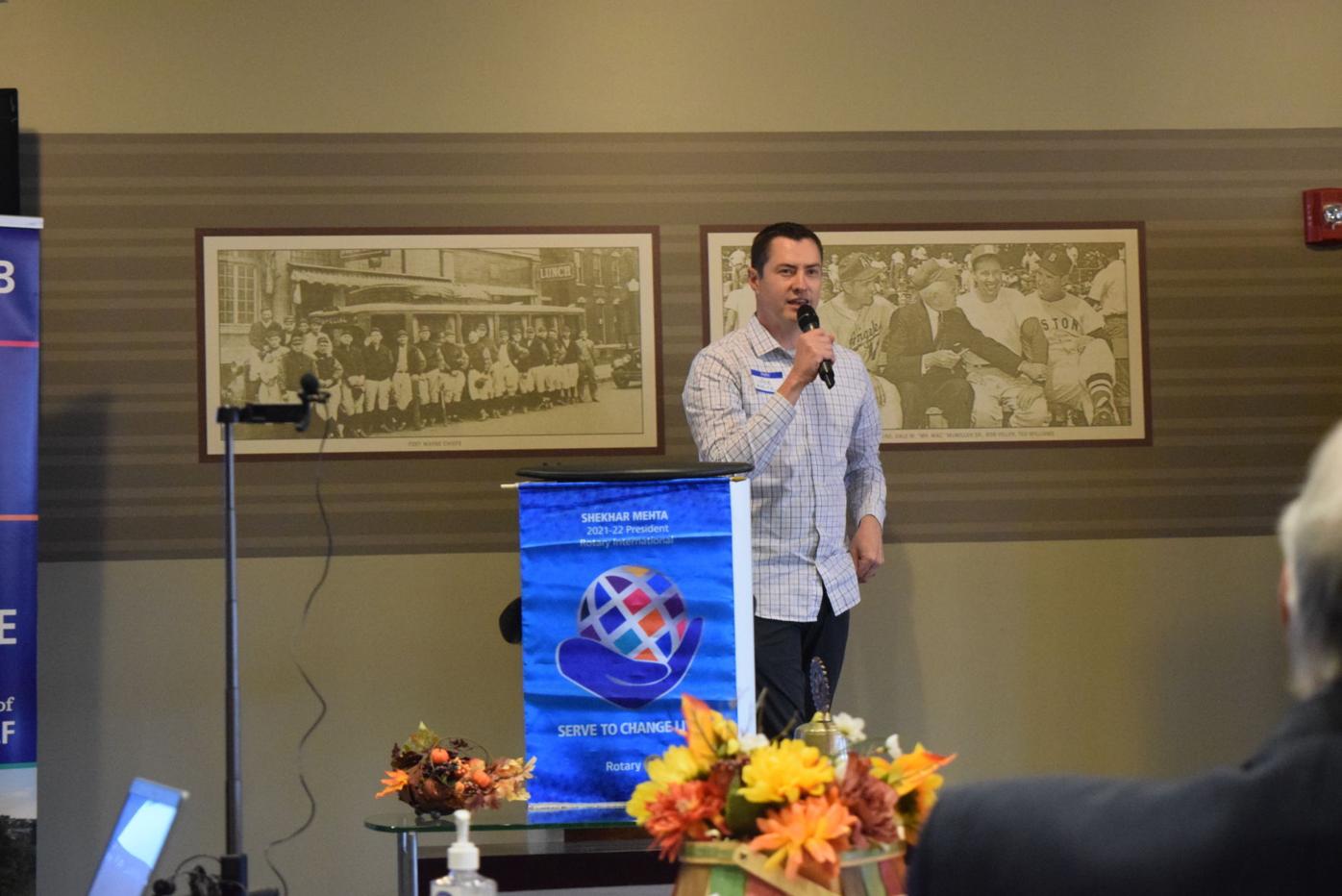 Joe White, site leader for Amazon, talks about his interest in entrepreneurism, growing up with artist parents and his return to his hometown, which he calls “one of the greatest cities on Earth.” 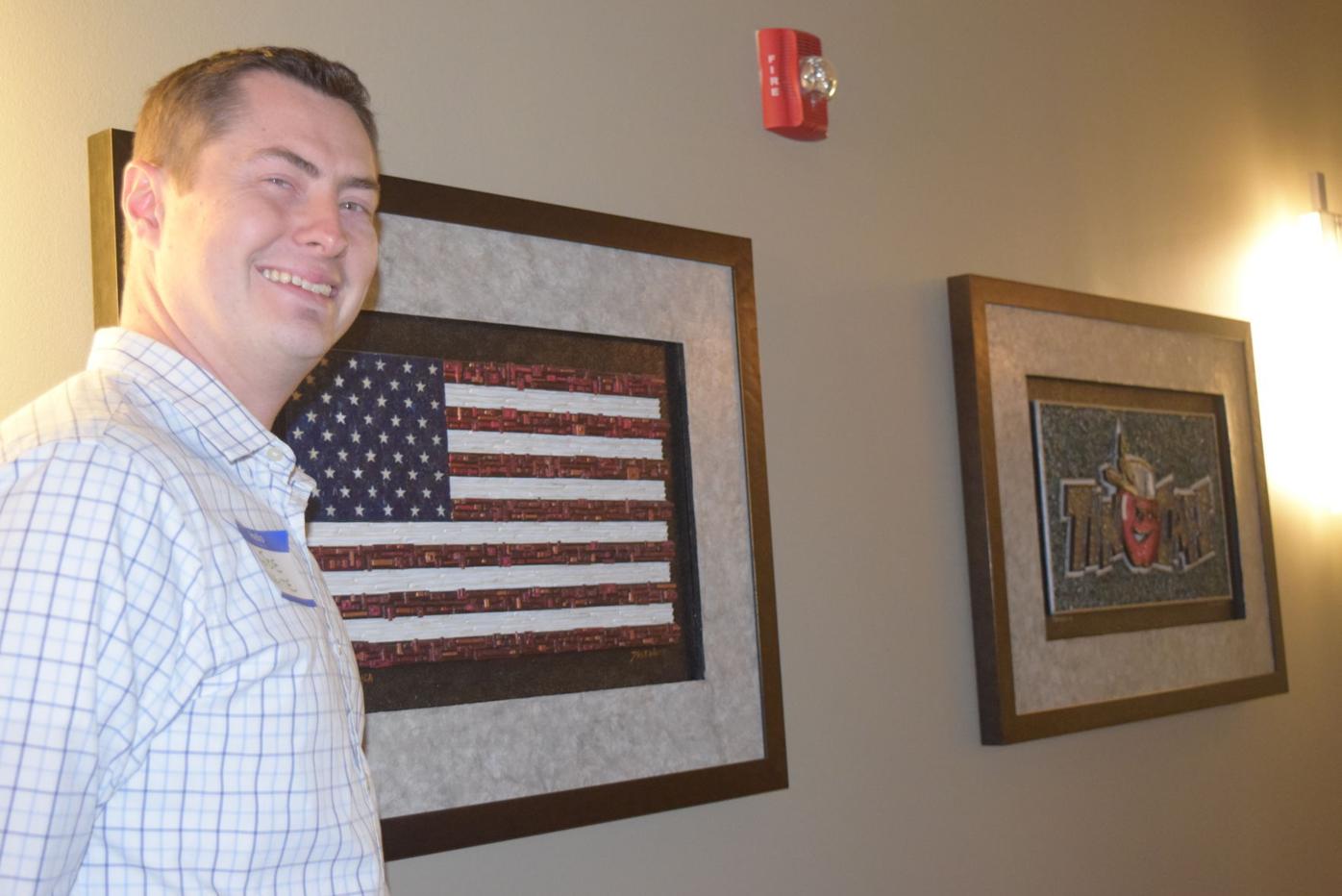 Joe White, who returned to Fort Wayne to live with his young family, stands by the artwork that his dad did that hangs in Parkview Field.

Joe White, site leader for Amazon, talks about his interest in entrepreneurism, growing up with artist parents and his return to his hometown, which he calls “one of the greatest cities on Earth.”

Joe White, who returned to Fort Wayne to live with his young family, stands by the artwork that his dad did that hangs in Parkview Field.

When Fort Wayne native Joe White saw a chance to return to his hometown, thanks to the opportunity of remote working, he took it.

Attending were his wife, Olivia, the daughter of former City Councilman Mark GiaQuinta, and one of their small children. White, who works as a site leader for Amazon, had yet another tie to show to the Rotarians. In their meeting space are two pieces of art depicting the U.S. flag and the TinCaps baseball team logo that were created by his father, Dale White.

Growing up with two artist parents gave White a first-hand look at “that entrepreneurial drive to see things, innovate and be part of something new.”

His mother, Marta Pequignot, started in the basement of the family home her picture framing business, Frame Art & Design, that she now runs on Dupont Road with Joe’s older sister, Kate Sorgenfrei.

He could go to many places around Fort Wayne and see artwork created by his parents, which instilled in him a deep sense of community.

“This is exciting,” White said. “We’re going to shout out again one more time like this is one of the greatest cities on Earth. And it is.”

He got to see both his parents as entrepreneurs.

“My career really started at age 11 filling nail holes and holding picture frames while my mom assembled them,” said White, who graduated from IU in finance and entrepreneurship.

After graduating from IU he planned on a career in investment banking in 2008, but being in the middle of the Great Recession, he adapted and set a new path for himself. He went into retail management at Target and had “one of the worst fourth quarters in retail history my first year as a ... team leader.”

He had chosen a large corporation to jumpstart his passion for business management, he said. At a Bloomington Target he innovated a logistics process “that was able to grow the sales by almost $10 million per year just based on solving a lot of complex problems.”

He continued to move up, traveling around Indiana with remodeling projects within the company. He met Olivia at the Bloomington Target and moved with her and their children to St. Louis after joining Amazon, where he helped create a robotics fulfillment center.

Ultimately, a couple of years ago, he had the opportunity to move to Seattle, “where the momentum of my career met at a crossroads.” He’d been involved in the St. Louis community and in many teams and projects, “but what I was really missing, ultimately, was this really deep connection to a community.”

That led him back to Fort Wayne as he compared housing prices between Fort Wayne and Seattle. They found a 1,200-square-foot home for $850,000, but when he found if he could work remotely, he jumped at the chance. That led the family to plan their return to Fort Wayne.

White likes the sense of community and low cost of living that Fort Wayne has. And it’s “a place where you can really go out and about and really meet and see people all the time.”

He and his wife can find connections with so many people.

White shied away from most questions about Amazon because he’s not a spokesperson for the company.

As has been previously reported, the Seattle-based online retailer is building a third facility in the Fort Wayne area. Its $100 million project along U.S. 30 West will be an Amazon fulfillment center. The site, anticipated to open in 2022, will create nearly 1,000 new, full-time jobs that pay at least $15 per hour and provide benefits to Amazon employees from their first day on the job. It will be Amazon’s first fulfillment center in Indiana to use innovative and advanced robotics technology.

Amazon Logistics already opened a delivery station at 8610 Avionics Drive near the Fort Wayne International Airport, where White works, which is in a 150,000-square-foot building. Less than a month after Amazon opened that warehouse it announced plans to build a $60 million, 629,186-square-foot facility also by the airport. That warehouse is located on Airport Expressway between Smith and Coverdale roads, across from Franklin Electric.