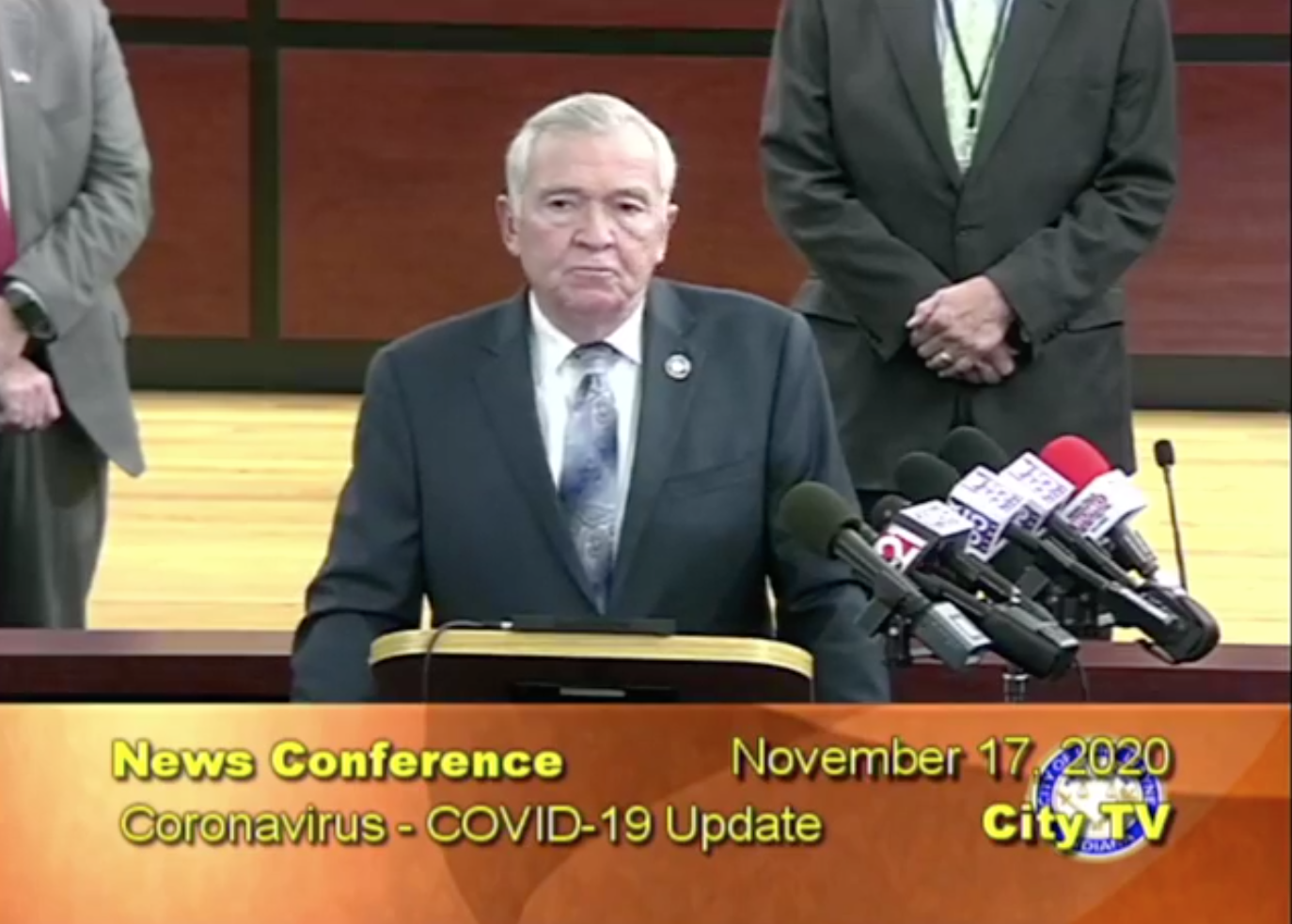 Fort Wayne Mayor Tom Henry said Nov. 10 that residents must wear masks to prevent the spread of COVID-19, as cases across the world start to surge again. 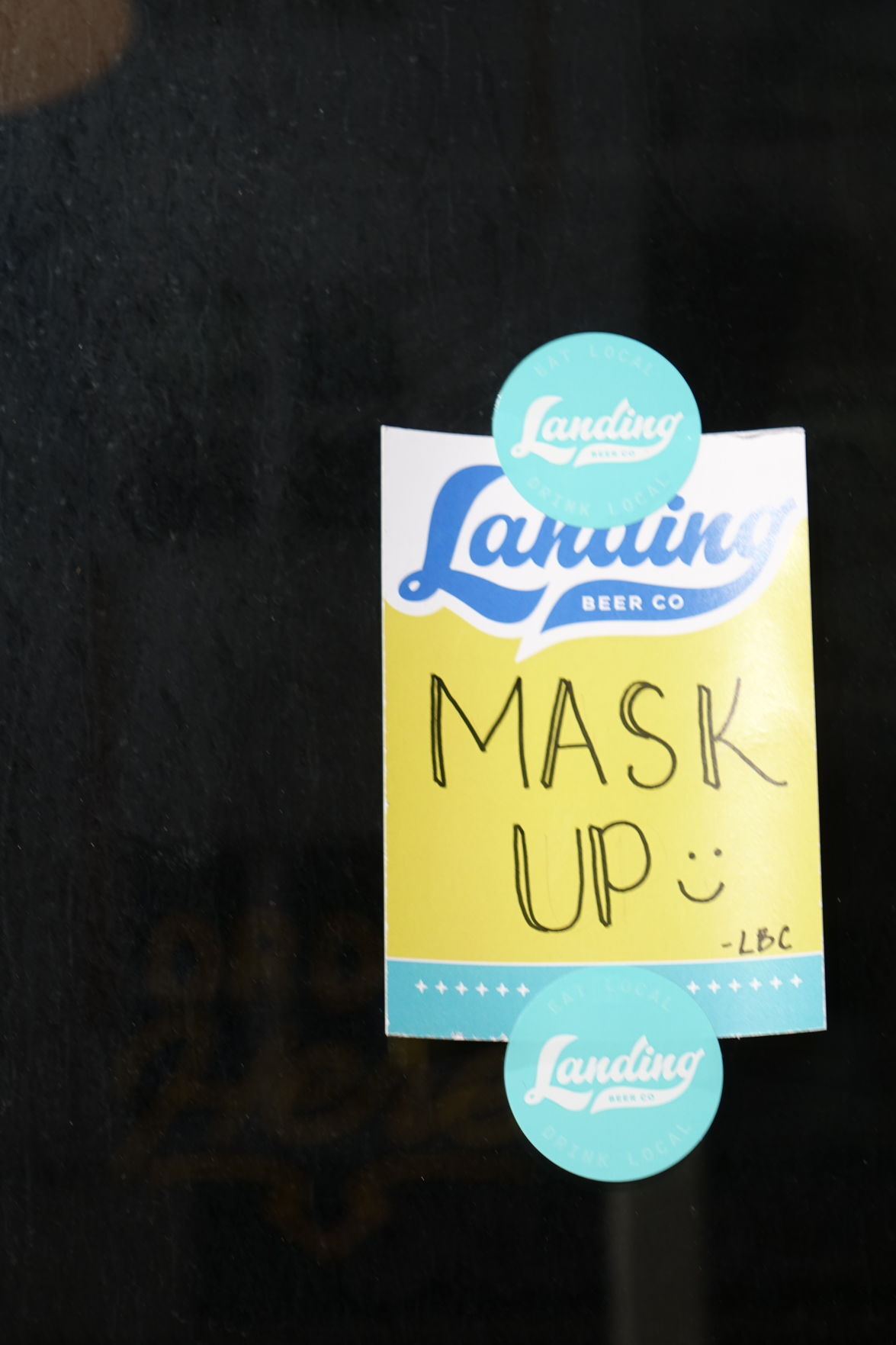 A “MASK UP” sign is posed at the Landing Beer Co., 118 W. Columbia St., Fort Wayne. Allen County health officials have put new restrictions on bars and restaurants to prevent the spread of COVID-19.

Fort Wayne Mayor Tom Henry said Nov. 10 that residents must wear masks to prevent the spread of COVID-19, as cases across the world start to surge again.

A “MASK UP” sign is posed at the Landing Beer Co., 118 W. Columbia St., Fort Wayne. Allen County health officials have put new restrictions on bars and restaurants to prevent the spread of COVID-19.

COVID-19 cases are increasing exponentially in Indiana and Allen County, prompting authorities to implement some new restrictions to curtail spread of the deadly virus, with 25 county deaths reported in less than a week.

Counties are designated red, the worst rating representing very high spread of the virus, if they exceed a per-capita new case rate of 200 cases per 100,000 residents in the past week and exceed 15% positivity in testing.

Red is considered the tipping point for uncontrolled spread. The state’s color-coded system is updated Wednesdays.

As Sutter put it, the county will be “so freaking red you should stay home.”

Deaths statewide are up to around 40 a day. The day of the news conference, nine more Allen County residents had died from COVID-19, following 16 in the previous week.

So in light of these new, alarming statistics, Sutter has issued an Allen County Public Health Order effective Nov. 22 and set to expire Dec. 12.

Bars and restaurants will be limited to 50% capacity indoors, and 100% capacity outdoors, but if they use tents, two sides must be open. They will have to close from midnight to 5 a.m.

Social gatherings will be limited to 100 people when the state is at level red, and 250 when the level is orange.

Gyms will be limited to 50% capacity.

Sutter discouraged multi-family in-person gatherings, suggesting “This is a great year for a Zoom Thanksgiving.”

Fort Wayne Mayor Tom Henry announced at the news conference that Citizens Square, 200 E. Berry St., home to several city departments, will be closed to the public Nov. 23-Jan. 19. Most employees will be working from home.

In addition to Citizens Square, the following city buildings will be closed: the Fort Wayne Parks and Recreation Department office and Parks and Recreation pavilions; community centers, and youth centers. The Foellinger-Freimann Botanical Conservatory will remain open. Fort Wayne Animal Care and Control’s facility will operate under restricted access.

Steve McMichael, mayor of New Haven, praised Sutter for his efforts. McMichael had COVID-19 several weeks ago and is still recovering, fighting fatigue every day. He had a couple of particularly bad days while he was sick, including difficulty breathing. “I wish this upon nobody,” he said.

(Allen County will be) so freaking red you should stay home."

The city of New Haven has enacted restrictions because of the recent spike in COVID-19 positive cases and recent announcements from the Gov. Eric Holcomb and the Allen County Department of Health about the county going from orange to red. It has canceled the Holiday Homecoming scheduled for Nov. 27.

Effective Nov. 22, all public meetings will be returning to virtual-only until further notice. Council Chambers will not be open to the public. Public comments may be submitted to the Clerk Treasurer at NStrock@NewHaven.IN.Gov by noon the Friday before council meetings. Common Council, Board of Works and other meetings will continue to be livestreamed on the city’s Facebook page @NewHavenIN.

Like many organizations, the city has faced staffing issues due to COVID-19, and recommends that the public call ahead. All city services continue to operate with additional safety protocols in place. Contact the city by phone or email. If you need to meet in person, set up an appointment so staff can schedule accordingly.  New Haven City Hall, 815 Lincoln Highway, is open 8-noon and 1-5 p.m. Monday-Friday, except holidays.

Even though the utility office is open, customers are urged to use one of the payment options below: