You are the owner of this article.
Edit Article Add New Article
You have permission to edit this article.
Edit
Home
News By Industry
e-Edition
Opinion
Lists & Leads
People
Events
Insights
Publications/Sections
Jobs
More...
Other KPC Newspapers
1 of 3 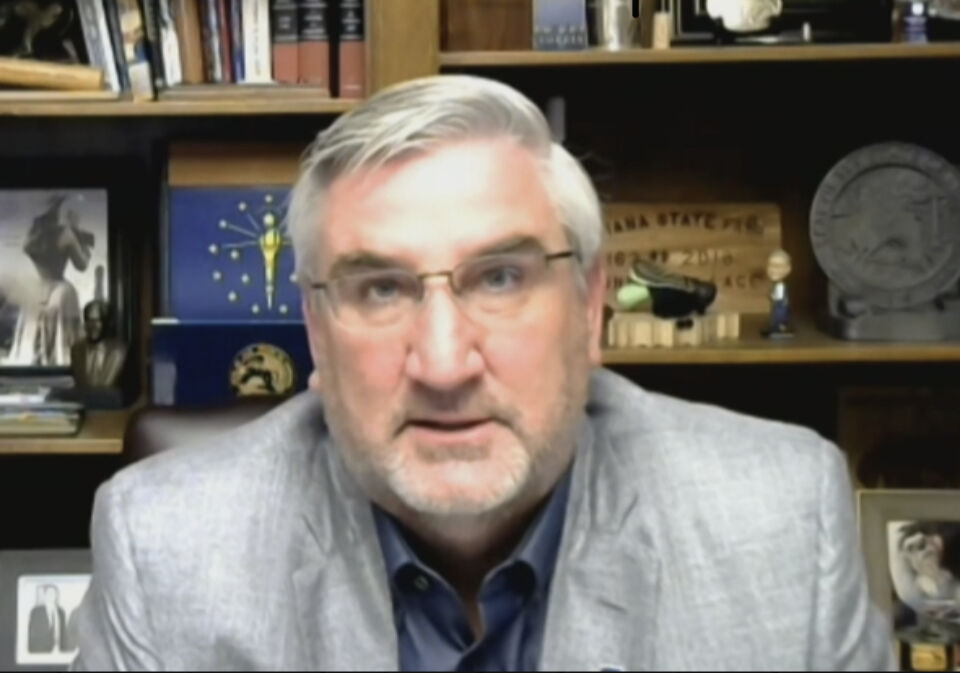 Indiana Gov. Eric Holcomb speaks Nov. 25 from the governor’s mansion where he and his wife have been quarantining after being exposed to someone with COVID-19. They have not tested positive for the virus. 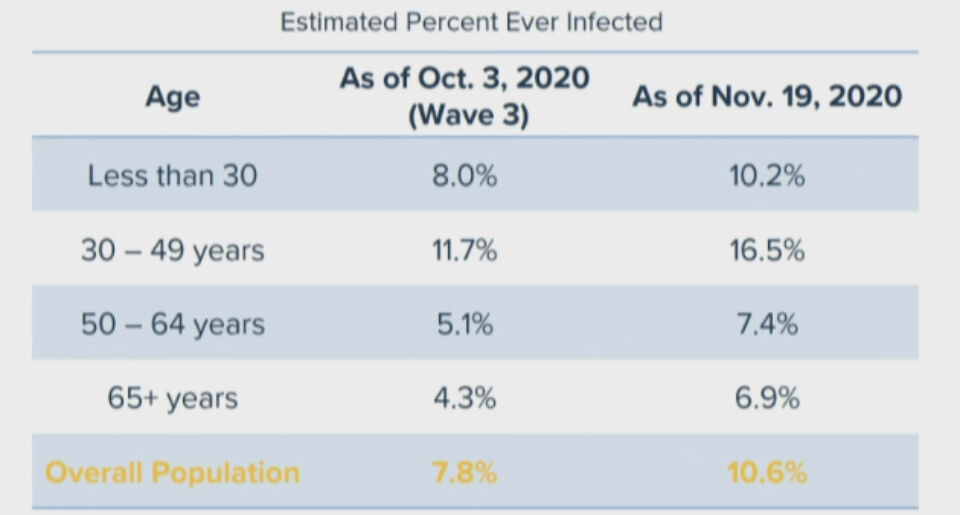 Indiana University Purdue University Indianapolis’ Fairbanks School of Public Health suggests over 10% of Hoosiers have been infected by COVID-19 since March. 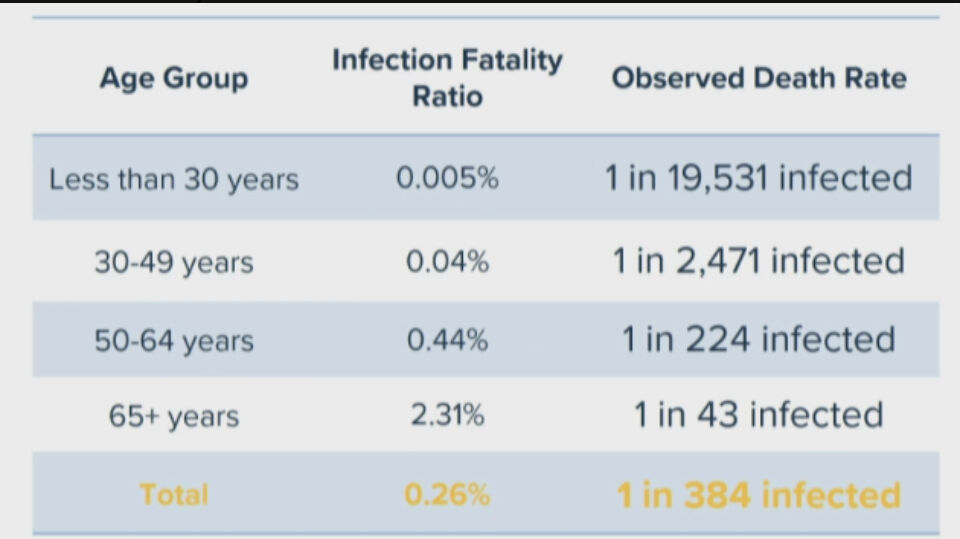 Indiana Gov. Eric Holcomb speaks Nov. 25 from the governor’s mansion where he and his wife have been quarantining after being exposed to someone with COVID-19. They have not tested positive for the virus.

Indiana University Purdue University Indianapolis’ Fairbanks School of Public Health suggests over 10% of Hoosiers have been infected by COVID-19 since March.

INDIANAPOLIS — Researchers studying the total spread of COVID-19 in Indiana are estimating that just over 10% of all Hoosiers have contracted the virus so far.

That’s far, far below the expected threshold needed to attain herd immunity to the virus and has already inflicted major costs in economic and health measures as well as in loss of life.

Researchers have also fine-tuned their estimation of the true mortality rate of COVID-19, including relative risk by age group.

On Wednesday, researchers from the IUPUI Fairbanks School of Public Health returned to discuss the third round of their ongoing COVID-19 prevalence study in Indiana, which has aimed to get a fuller grasp of the pandemic’s reach beyond what is shown only by testing.

“The purpose of the Indiana prevalence study has always been to identify the cumulative number of Hoosiers have been infected with the coronavirus,” lead researcher Dr. Nir Menachemi said.

Menachemi opened by reminding Hoosiers that there’s a difference between “cases” and “infections.”

“Cases” are only those instances of COVID-19 that are identified by someone receiving a positive test or seeking medical attention, but most people know that a large percentage of people contract and carry COVID-19 asymptomatically.

Earlier rounds of the Fairbanks study suggested that upward of 40% of all cases were asymptomatic.

“Infections” represents that larger, total figure of everyone who contracts COVID-19, including the people who only have minor symptoms or who carry asymptomatically and never get tested or never realize they have the virus.

“The number of infections is not the same as the number of cases,” Menachemi said. “Cases represent just the tip of the iceberg.”

Researchers have been building their picture of how many total Hoosiers have been infected, with symptoms or not. Back in April, the Fairbanks team had gauged that about 3% of all 6.7 million Hoosiers had been exposed.

They have built those estimates by doing random sampling of Hoosiers from around the state, administering tests for both current infection and antibodies to look for past infection. Menachemi also said the study has been updated with the aid of historical testing data from the state, which has helped fill in the picture.

Within the third round of their study, at the start of August their estimates had risen to about 7.8%, with an update to an estimate of about 10.6% as of mid-November, Menachemi said.

While testing has shown 312,521 cases all-time via positive tests, the Fairbanks study suggests that the true impact has been more than double at close to 714,000 Hoosiers overall.

In April, Menachemi stated about 10 in 11 cases weren’t being identified because testing was so scarce at the time. That ratio has obviously improved over time as testing has widened.

The impact of that ratio reinforces that Indiana isn’t going to reach a level of immunity to the virus simply by exposure and trying to do so would rack up many more deaths along the way. To date, more than 5,200 Hoosiers have died from COVID-19.

Herd immunity can be obtained and protect people if enough people contract a disease and gain immunity, thereby protecting people who haven’t been exposed, but the ratios needed to accomplish that are very high.

“We are very very far away from the approximately 70% needed for herd immunity,” Menachemi said.

“If the virus continued to spread until 70% got infected, an additional 13,000 Hoosiers would lose their lives,” he added. “Comparatively that’s many times more deaths than have occurred in Indiana.”

The other main finding of Fairbanks study is new updates on the true mortality rate of COVID-19, including mortality rates by different age groups.

Mortality rates represent the percentage of deaths among total infections, a number that’s hard to pin down because it’s difficult to determine exactly how many people actually get infected since so many present asymptomatically.

In April, that rate was estimated at about 0.6%, six times the typical flu mortality rate of 0.1%.

As time has gone on and health outcomes have improved as doctors gain more experience treating COVID-19 and additional interventions have become available, that mortality rate estimate has also dropped, with the Fairbanks study now suggesting that true mortality is about 0.26%, or about 1 death for every 384 who get infected.

However, COVID-19 has shown that it’s significantly more dangerous to older people than younger, the Fairbanks study has also fine-tuned mortality rates based on age, showing far less risk for young people.

But as age increases, risk increases.

The real risk is at the 65-plus age group, where Hoosiers face a mortality rate of about 2.31%. At that age range, about 1 in 43 people who get infected — which covers all infections regardless of severity from totally asymptomatic to intensive-care-unit hospitalizations — are likely to die.

Fairbanks School Dean Dr. Paul Halverson stressed the importance of knowing and paying attention to that risk to older people.

“It’s really important to underscore the fact that as we see the mortality tables, you can see the older you are the more likely you are to die from this infection. It’s not to scare anyone,” Halverson said. “We need to be very vigilant in particular around reducing exposure to the disease.”

Halverson also pointed to the connection that wide community spread leads to increasing infections among those older age groups. In earlier phases, while infections ran higher among younger groups and lower among older groups, what the team saw lately as cases have spiked high is that as younger groups showed more infections the ratio of cases in older populations has also grown more sharply.

Gov. Eric Holcomb and Indiana State Health Commissioner Dr. Kris Box made continuing pleas for Hoosiers to do their part to reduce spread by wearing masks, avoiding gatherings and staying home if they are sick and made one last plea for Hoosiers to consider not gathering for Thanksgiving as a way to reduce further transmission.

Holcomb said although it’s too early to tell for sure, that recent days have shown that new cases may be starting to level off, a change that the governor attributed to increased awareness and vigilance from both businesses and everyday people.

“I really have been encouraged lately by so many folks doing even more than they were doing prior, putting others above self,” Holcomb said. “All those good actions add up and I am thankful that over the last four days, we’ve seen our average seven-day positivity rate tick down ever so slightly. I really do attribute that decline to more and more Hoosiers individually stepping forward and recognizing the stress and strain on our health care network.”

The down side, Holcomb and Box noted, is that the prevalence of serious cases and deaths is still rising with hospitalizations at an all-time high and deaths at all-time highs.

“The number of people hospitalized continues to rise and the number of daily hospital admissions is continuing to go up as well,” Holcomb said. “So on one hand we see a decline but on the other an incline and we must be able to muster the strength and wherewithal … that we’re doing all that we can to help our health care network.”