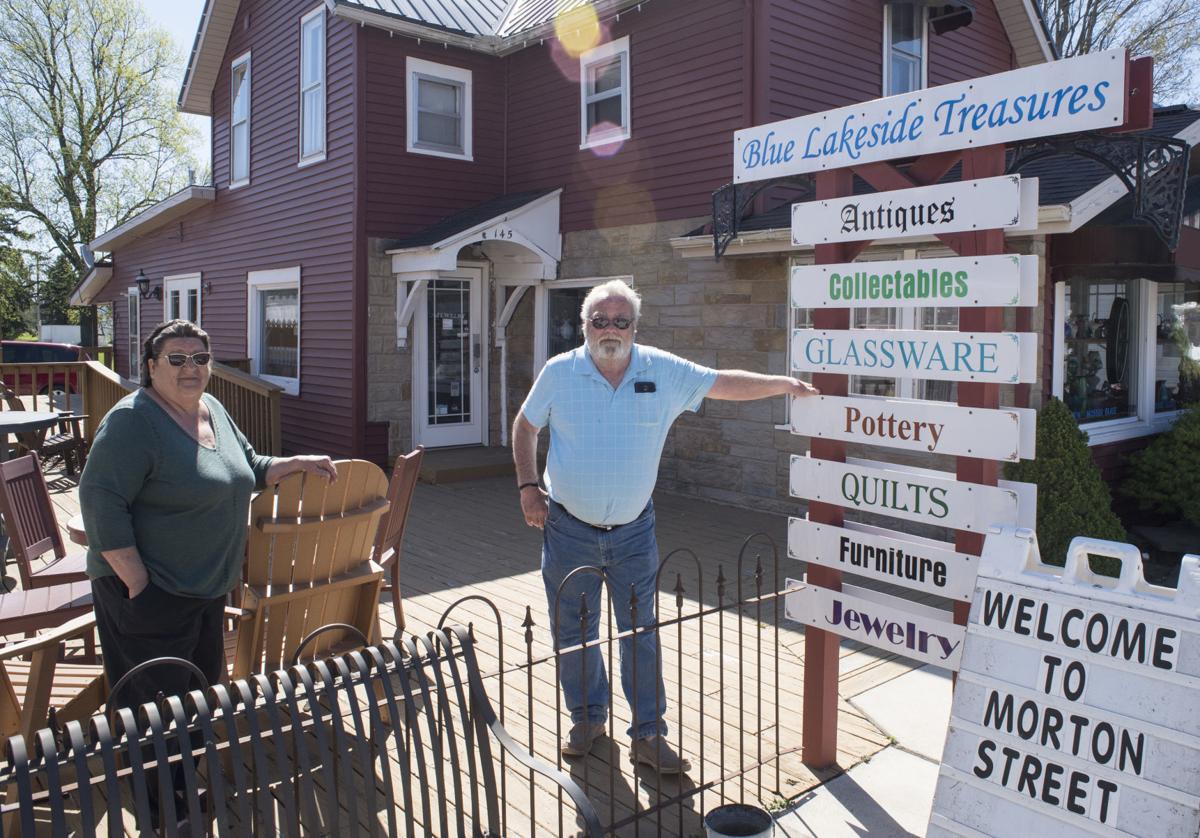 Judy and Jim Thurber stand outside their Shipshewana store. 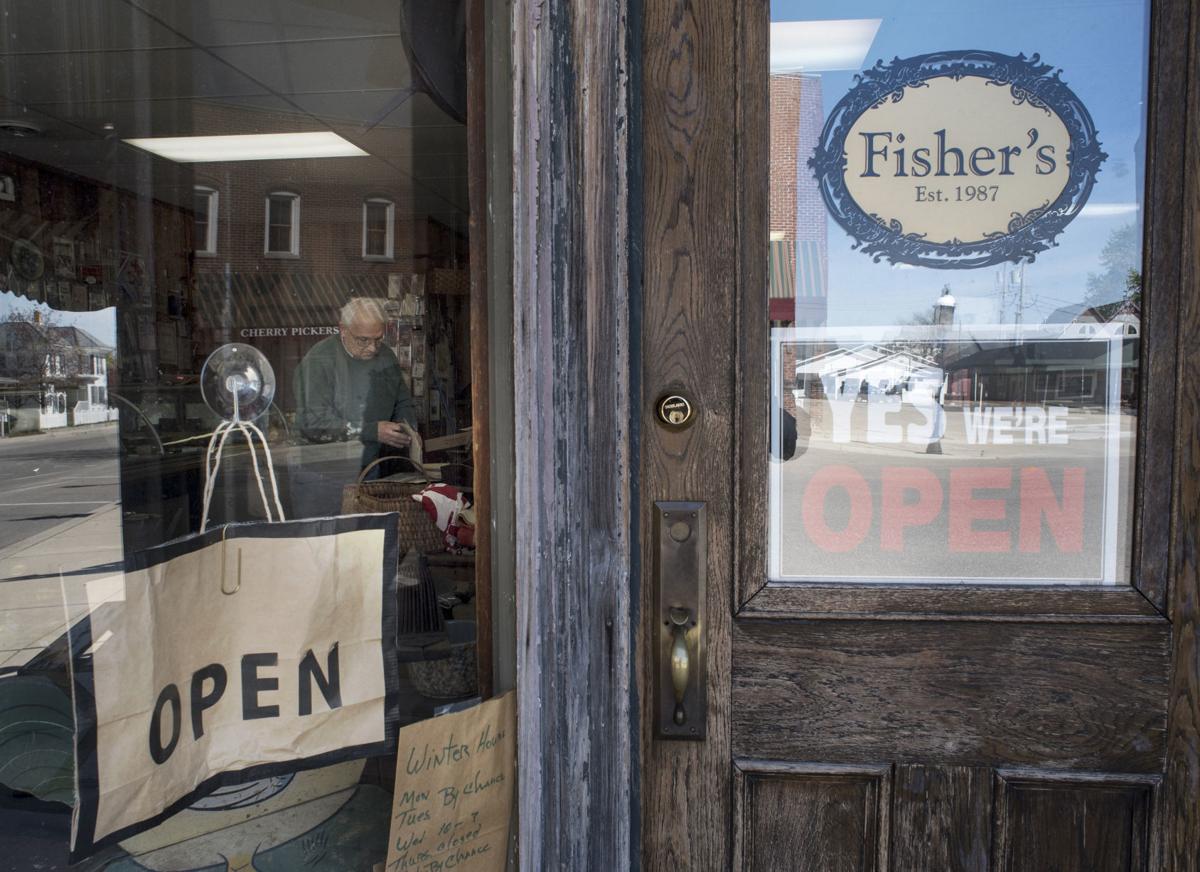 Judy and Jim Thurber stand outside their Shipshewana store.

He added that the toughest part of being a business owner through the pandemic was not knowing when it might all end.

SHIPSHEWANA — There’s a large, neon-bright open sign hanging in the center of the door of Larry Fisher’s antique store in Shipshewana.

Fisher was just one of a handful of business owners to throw open his business the moment Indiana Gov. Eric Holcomb’s “Back on Track” program went into effect May 4, reopening businesses to restart the state’s economy, which had been shut down for nearly six weeks because of the coronavirus pandemic.

Fisher said he’s seen his share of ups and down after 33 years in the antique business, but never anything like this.

Being open and having customers, however, are two entirely different things.

Fisher said he saw few people May 4. Only two people walked into this store that first morning, a couple he knows who said they had stopped by to say hello.

This week should have been very busy in Shipshewana. The first full weekend of May is normally reserved for the town’s Mayfest celebration, a two-day event that signals the start of the tourist season here. Known for its music, food, and events, Mayfest usually packs the streets.

Like so many other events, Mayfest was canceled this year, another casualty in the war to stop the spread of the coronavirus.

Next door to Fisher’s antique store, Jim and Judy Thurber spent a few minutes outside, taking a break from cleaning their store, Blue Lakeside Treasures. The Thurbers weren’t open for business but planned to open later in the week hoping to catch a little business because of Mother’s Day. They sell glass collectibles.

The Thurbers said while they are anxious to reopen, it won’t be business as usual in their shop. For starters, they’ll only allow six customers at a time to enter their store. And customers will be required to wear a face mask.

“We’ve never been through anything like this before,” Judy Thurber said.

In a normal year, Mayfest is one of many difficult but almost equally important events on the Shipshewana Retail Merchants Association calendar. Mayfest comes three months after the business group’s last big event, Pajama Days, and helps start the busy summer season so many businesses depend upon.

Levi King, a member of the merchant’s association and owner of several local enterprises, said the last two months have been difficult for everyone here, and no one is sure just how tourism will be rebound in the age of a pandemic.

“Shipshewana’s definitely at a standstill,” he said. “The big boys in the area like Blue Gate and Essenhaus, they’re definitely experiencing a big hit.”

King often can be found behind the counter at his Jo Jo’s Pretzel restaurant stretching the dough and making pretzels. The store is located on the first floor of the Davis Mercantile building, the heart of Shipshewana’s retail district. While King said he doesn’t expect his business to come back immediately, he does believe it will start to improve as state restrictions are lifted, and hopes that by midsummer, his business will be back to its normal level.

“At Jo Jo’s Pretzels, if things kick in gear and we get really busy this summer and fall, we could actually come back,” he said. “We probably won’t make up for our losses, but it could be a good fall.”

Across town, Holcomb’s announcement that the state would start lifting restrictions came as good news to Ryan Riegsecker, president of Blue Gate Hospitality. Riegsecker’s company operates the Blue Gate Restaurant, Blue Gate Bakery, the Blue Gate Performing Arts Center, and the Blue Gate Garden Inn, as well as a couple of other Shipshewana retail shops. While he understands the need, the efforts to slow and control the spread of the coronavirus hit Riegsecker’s businesses especially hard.

At the Blue Gate Restaurant, it went from feeding as many as 1,500 people on a good March weekend to serving only a handful of meals through its carryout program.

Ironically, Riegsecker said he thought as he rolled into February that Blue Gate Hospitality, the parent company of his businesses, was on its way to having the best year yet. The organization had just finished a $4 million remodel of the former Hostetler Hudson museum, turning it into a state-of-the-art performing arts center, capable of showing big-name artists while seating more than 1,500 people. The venue showed great promise, hosting two sell-out shows before state officials shut down the state to slow the virus.

Riegsecker said hearing the governor’s plan to start reopening Indiana businesses brought him the first real sense of relief he’s felt in more than a month.

“That was probably the most concrete information we’ve gotten at one time the whole way through,” he said. “We’re pretty optimistic about it now.”

The plan allowed Reigsecker to open his famed Blue Gate Restaurant at 50% capacity May 11. The company’s hotel has remained open, but with almost no one visiting Shipshewana because its shops and restaurants were closed, it, too, became a ghost town.

While the town’s retail shops are slowing getting back on their feet, Riegsecker’s Blue Gate Performing Art Center likely won’t be allowed to reopen until June. His staff has been scrambling to rebook the artists and shows that were canceled in March, April and May.

“That’s down the road a little way,” Riegsecker said of the theater. “Even though, it feels pretty good to know something going to happen.”

He added that the toughest part of being a business owner through the pandemic was not knowing when it might all end.

“There’s just nothing worse than indefinite not knowing,” Riegsecker said. “At least now we kind of make a plan and start things moving in that direction.”

Shipshewana Trading Places, home of the famous Flea Market, announced on its website the Flea Market will be opening soon. Traditionally, the market would have been open by now, but it too reopened May 12 with limitations.

The market’s plant and produce section opens first but will open only to drive-thru/curbside sales. Customers are encouraged to enter the property from State Road 5 and follow directions. The market opens at 8 a.m.

The full market will open on May 19, starting at 8 a.m. and run through 4 p.m. It will be open two days a week, Tuesdays and Wednesdays, through September.

Market officials are warning both vendors and visitors that social distancing guidance will apply as recommended by the state of Indiana.