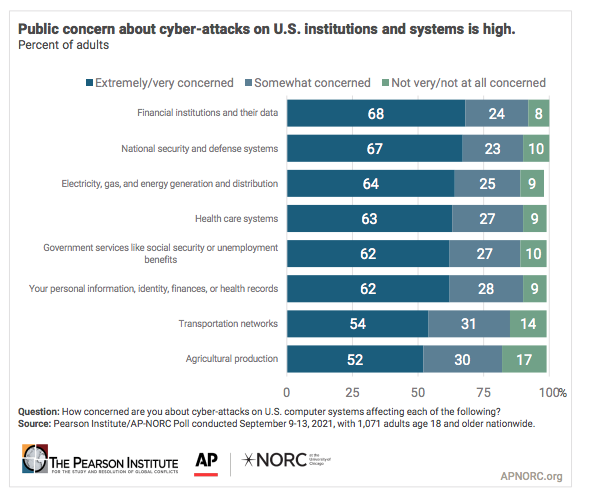 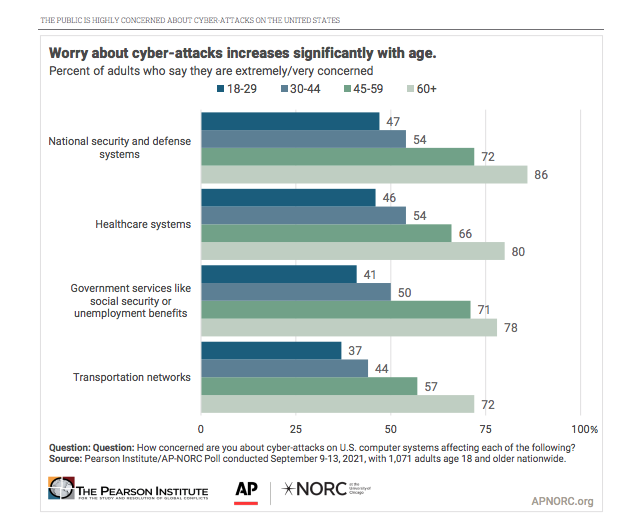 A Pearson Institute poll done with The Associated Press and NORC Center for Public Affairs found that 91% of the adult respondents had at least some concern about cyber-attacks on U.S. financial institutions and their own data.

The results showed of that 91%, 68% said they were very concerned.

“Older adults are more likely to be worried about cyber-attacks than younger adults, with concern increasing with age,” according to the results.

The nationwide poll of 1,071 American adults was conducted by Pearson Institute for the Study and Resolution of Global Conflicts at the University of Chicago and The Associated Press-NORC Center for Public Affairs Research from Sept. 9 to 13, using AmeriSpeak, the probability-based panel of NORC at the University of Chicago. Online and telephone interviews using landlines and cell phones were conducted. The margin of sampling error is +/- 3.9 percentage points. The poll is being released in conjunction with the 2021 Pearson Global Forum, which will address these issues.

Other results of the study:

• 88% of respondents age 60 and older say that the Chinese government is a serious threat to the cybersecurity of the U.S. government, compared to 53% of adults age 18-29.

The U.S. Census Bureau released Oct. 7 the latest Small Business Pulse Survey, which found Indiana respondents said they’d seen a decrease in revenue and over a third were having trouble finding new workers.

Responding to the question, “In the last week, did this business have a change in operating revenues/sales/receipts, not including any financial assistance and loans?” those answering “Yes, decreased,” were 21.3%, 1.9% lower than the national average.

Those seeing a lower number of paid workers were 10.4%, 0.8% lower than the national average.

Indiana respondents who said “Yes” to a question about having a hard time hiring workers totaled 34.9%, 1.2% higher than the national average.

The survey measures the effect of changing business conditions during the COVID-19 pandemic on U.S. small businesses. The target population is all nonfarm, single-location employer businesses with 1-499 employees and receipts of $1,000 or more in the 50 states, District of Columbia, and Puerto Rico. The sampling frame was extracted from the Business Register in April 2020.

See the interactive results at https://portal.census.gov/pulse/data/#data.