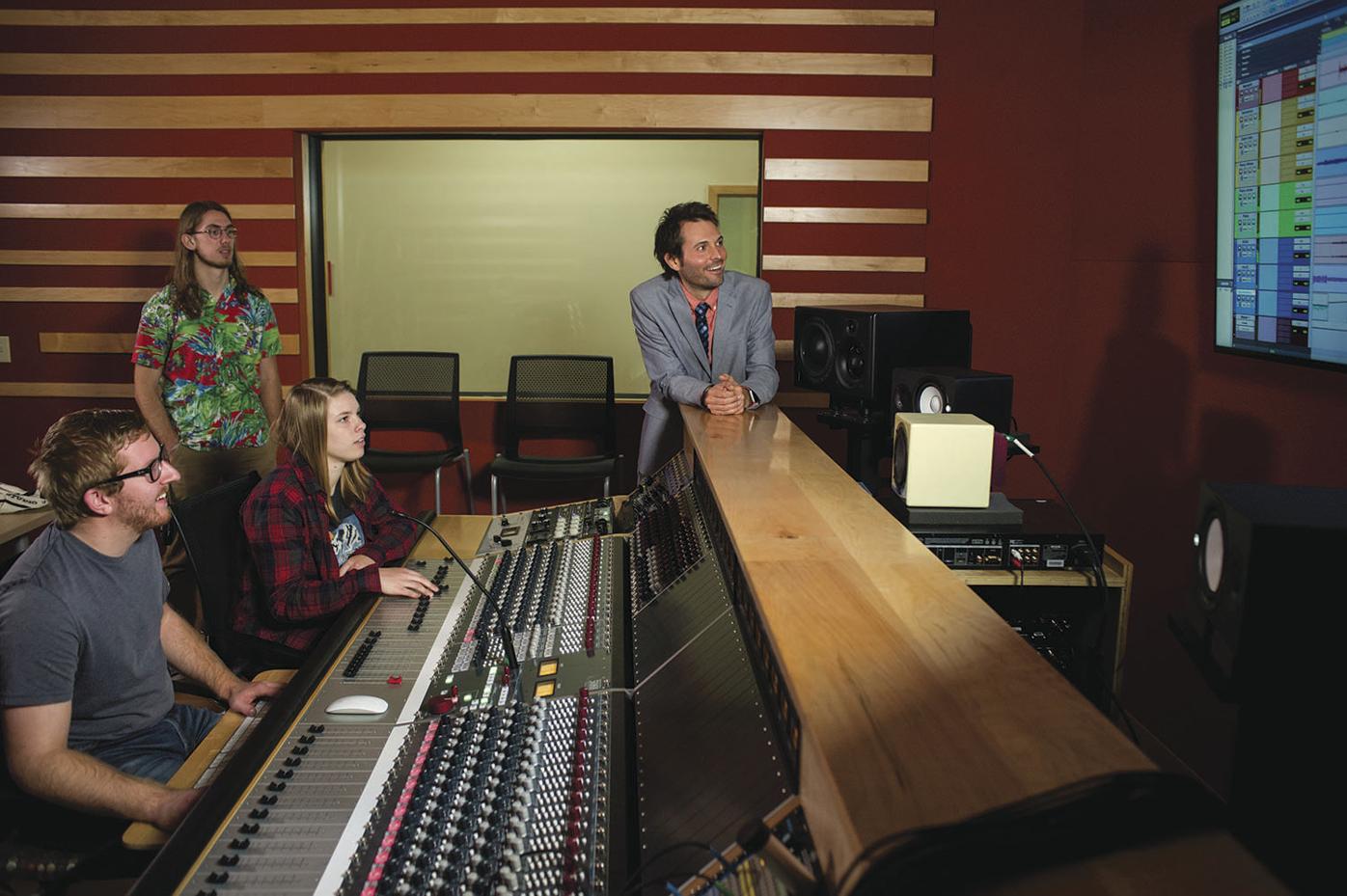 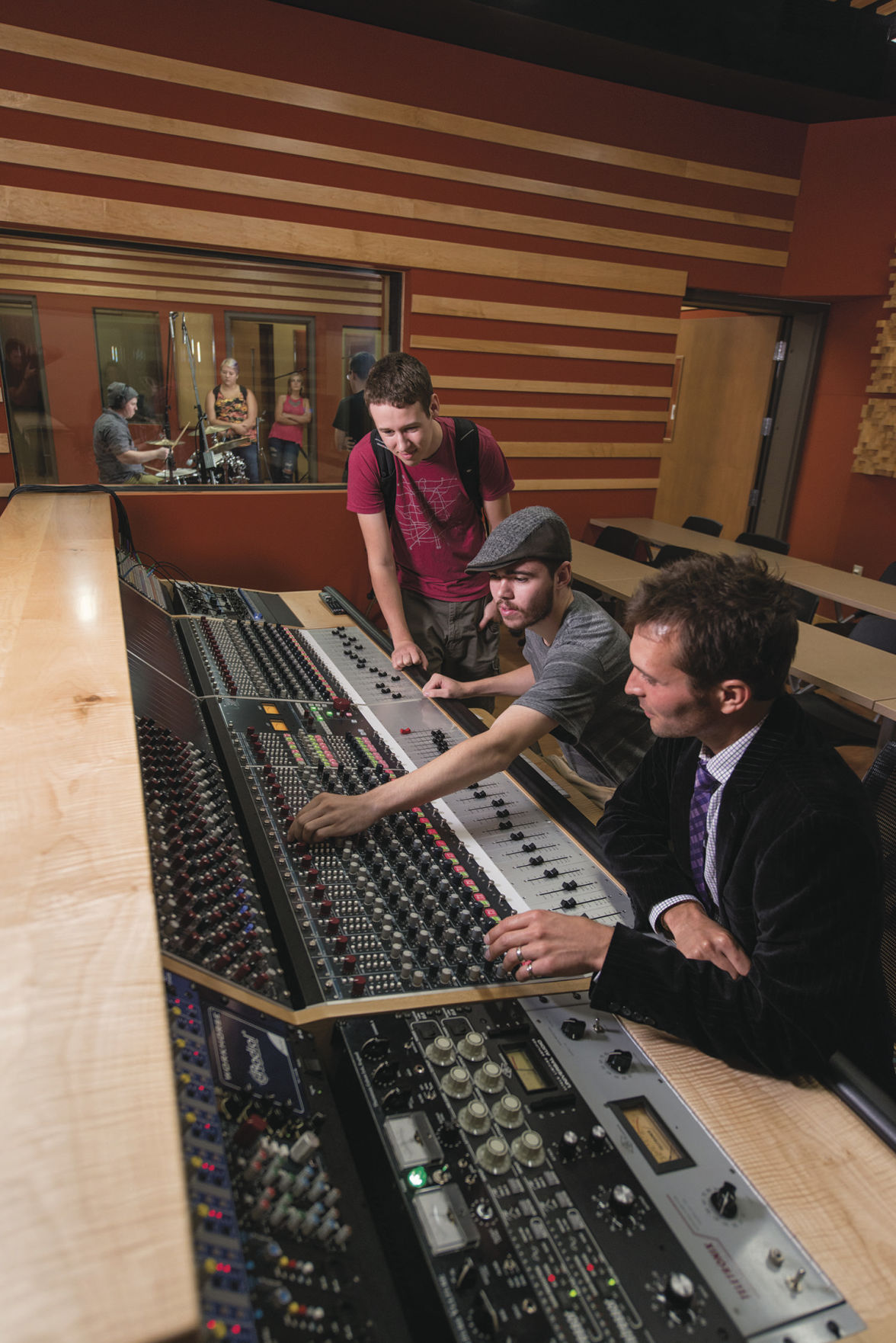 Students from a variety of departments and disciplines at the University of Saint Francis are collaborating this school year to create a new record label.

The idea was suggested by the students themselves, said Miles Fulwider, chairman of USF’s music department. Fulwider, interim dean Colleen Huddleston and Andrea Robinson, director of the university’s Media Entrepreneurship Training in the Arts (META) program, thought it would be a good fit that would allow students with a range of interests to participate.

“It was almost impromptu,” Robinson said. “We started talking about it and Miles and I both agreed it would be something unique and interesting for the students to work on. He has such a deep background in the music industry that I said, absolutely, let’s work on it.”

The music business has changed radically in the last few decades as a result of the internet and other new technologies. Fulwider predicts the label the students create will be different than any other label created before, and Robinson agrees.

“This particular industry is in flux, so what we’re going to come up with needs to be creative, represent the label that we’re designing and also the artist. I don’t necessarily see a traditional business plan being submitted at the end,” she said.

Students from music technology and the business school, as well as META minors with majors in education, graphic arts and psychology, among others, have signed on for the project.

“Music is a great uniter and it crosses so many different interests,” Robinson reflected. “I thought students would be interested in being a part of it, but then you never know what student are going to be interested in until they tell you. When they heard about it…they were ecstatic.”

The project was announced Sept. 13. The first semester will involve the creation of the business entity - developing a business plan, selecting a name for the label that will be meaningful and crafting a marketing plan. The spring semester will get more into the production side of the project, with the selection of an artist to record and the creation and promotion of that recording.

Fulwider said he believes it’s possible the venture could become a revenue generator, but the first goal is to give students hands-on experience that they can take with them whatever profession they eventually enter.

The META program is essentially an honors program that requires students to have a minimum grade point average, apply, interview and submit recommendations for admission. Beyond that, it follows a traditional project based learning environment, Robinson said.

“We give them a problem or a project, we work through what we know and what we need to know,” she said.

Depending on the knowledge the students may need to access to complete the project, professionals in law, accounting, marketing, etc. may be called in for guest lectures.

“I’ve been joking with my students that I feel like my role is kind of like acting like bumpers at the bowling alley, trying to keep everything moving. It’s important that this really be student driven,” Fulwider said. “This is an evolving industry, there are no rules right now. Ultimately, we’re just guiding that ball down the court and hopefully we’ll get there.”

Students also will get to work with Emmy, Grammy, Tony and Drama Desk award-nominated producer Rob Mathes, who has written, composed and/or directed the works of Sting, Yo Yo Ma, Bruce Springsteen, U2, and the Royal Philharmonic Orchestra.

Fulwider has worked with Mathes, and said he also is an amazing teacher.

“I couldn’t think of anyone better, whether I knew them or not,” Fulwider said. “He was at the top of the list.”

There will be an open call for artists to audition - students and non-students alike - and one will be selected for the new label’s debut album. Artists from all genres of music will be allowed to audition.,

Although the program is just getting started, Fulwider believes there is a lot of potential for students to build and refine the label in coming years.

“We certainly don’t want this to be a great, one-off project and then it dies,” he said. “I’m hoping that this is the beginning of a very long-standing entity.”

The META, music technology and Keith Busse School of Business and Entrepreneurship are all housed at USF’s downtown campus.

The music label will premiere its first album at an artist launch party late in the 2018 spring semester.