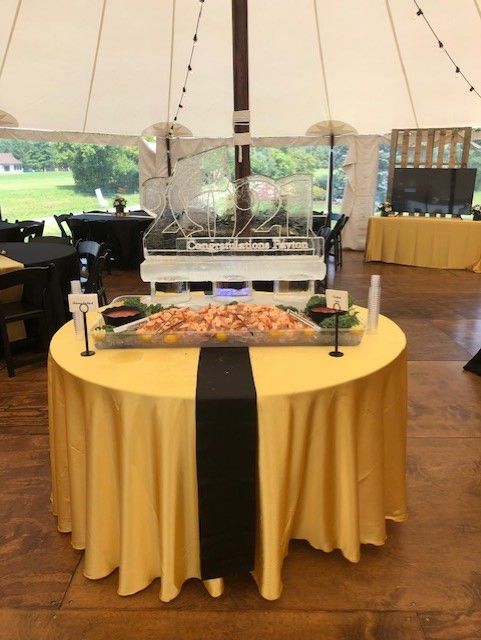 Ceruti’s catering for a graduation party earlier this year, which Joe Ceruti, owner of the catering company, said has provided a large source of money for the business this summer. Ceruti also said due to a lack of staff, the company has had to turn down opportunities this summer. 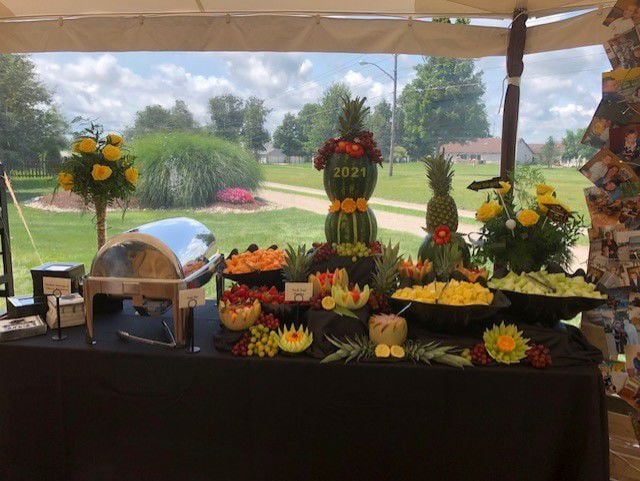 Catering for graduation parties has allowed Ceruti’s to do more events and get back on track to where they were before the pandemic. Joe Ceruti, owner of the catering company, said the business has struggled finding employees, but are now on the right track.

Ceruti’s catering for a graduation party earlier this year, which Joe Ceruti, owner of the catering company, said has provided a large source of money for the business this summer. Ceruti also said due to a lack of staff, the company has had to turn down opportunities this summer.

Catering for graduation parties has allowed Ceruti’s to do more events and get back on track to where they were before the pandemic. Joe Ceruti, owner of the catering company, said the business has struggled finding employees, but are now on the right track.

Nearly a year and a half into the COVID-19 pandemic, people are ready for a return to normalcy and going back to the way their lives were before. That includes everything from schools and restaurants reopening to full capacity, and masks and social distancing disappearing.

Since the pandemic began in March 2020, some industries have had more difficulty to returning to normal than others because of the different regulations they have. One of these is the catering industry.

Joe Ceruti, owner of Ceruti’s Catering, Inc., said his business has been catering since restrictions were loosened and caterers were allowed to begin working again. But, for him, the journey back has not been easy.

“Labor is probably the number one biggest challenge,” Ceruti said. “Not everyone wanted to come back because the government is giving them money not to work, so labor is a huge, huge issue.”

Although the company has been able to find more people in the last three to four weeks, Ceruti believes people don’t want to work as much because taking a break from work changed everything.

“When you go from your regular speed, volume and frequency of events, you’re in a group doing it and it’s repetition,” he said. “Once that comes to a halt, it’s very difficult for people to then get back into it and change gears.”

Ceruti said his business was allowed to open up in July 2020 and was full capacity August through October 2020, before Governor Holcomb’s orders shut down his catering business in November, which Ceruti said was worse than before.

“We were going into our busiest time of the year – December is our number one month – so we lost in one month over $40,000 in sales. It was devastating and destroyed us,” he said.

Ceruti said that’s when his salespeople worked the most because they were on the phone with customers who were angry that they were unable to have their weddings and events.

“They never got a break in. They were working overtime, but I had no revenue and I had to pay them obviously,” he said.

Although the shutdown affected how many people could work and Ceruti had to get creative with how he was hiring people, he said he was proud of how his staff handled the pandemic.

“I’m very proud of my staff and I’m very proud of what we’ve been able to do, and survive it and get through it,” he said. “I have to limit how many jobs I can take on a day because even though I don’t want to, I want to make sure I’m treating the customers that are booked with us properly and they’re getting the right attention, detail and expertise.”

Another catering business that has struggled during the COVID-19 pandemic is Don Hall’s. Carrie Riepenhoff, manager with Hall’s Catering Services, said the business went from “zero to 100 miles an hour” when they were allowed to serve again and began rescheduling events.

“Unfortunately, the pandemic had affected the events we had already scheduled in 2020, and we had to rebook and tentatively rebook again with some events,” Riepenhoff said. “But we were blessed to be able to reschedule and open again.”

She said the catering business began opening up more as the mask mandate ended and staff became vaccinated.

Riepenhoff also said she has seen customers with more of a sense of urgency to celebrate in the manner they enjoyed before, which means the caterers are expected on shorter notice. With less staff working, it becomes harder to serve those events.

“It does take a moment to bring people back. We are blessed to have locations that stayed open all the way through, and we’re able to because we have restaurants,” Riepenhoff said. “We had relocated some of our staff to other locations, and it took a couple of weeks or even longer to get our regular team back.”

She believes it took so long to get people back because they did not know how comfortable they would feel working during the pandemic, or with wearing a mask while at work. Riepenhoff also said multiple couples had babies during the pandemic so they had to take leave, and Hall’s had to change how they hired and ran they business as a result.

“We sometimes hired on site, then tested the waters with staff,” she said. “We have had to restructure our timelines of availability, assistance with transportation and all things that have a sense of urgency.”

Hall’s also began paying their catering workers more during the pandemic to invite more people to join a team of people that get paid well for what they do. Riepenhoff said hiring so rapidly wasn’t the ideal way to conduct business, but it did help the company.

“We end up having events on the weekend and we could be in four to five different locations on the same day,” she said.

Riepenhoff said things are looking up for the hiring process at Hall’s Catering, and she believes it will stay that way as things continue to evolve.

“Somehow, we just make it work,” Riepenhoff said. “We have taken a hard look on how we can draw in strong team members that we can rely on. And with that, made some changes to allow them to feel confident that if they spend their day with us, it’ll be both enjoyable and profitable.”