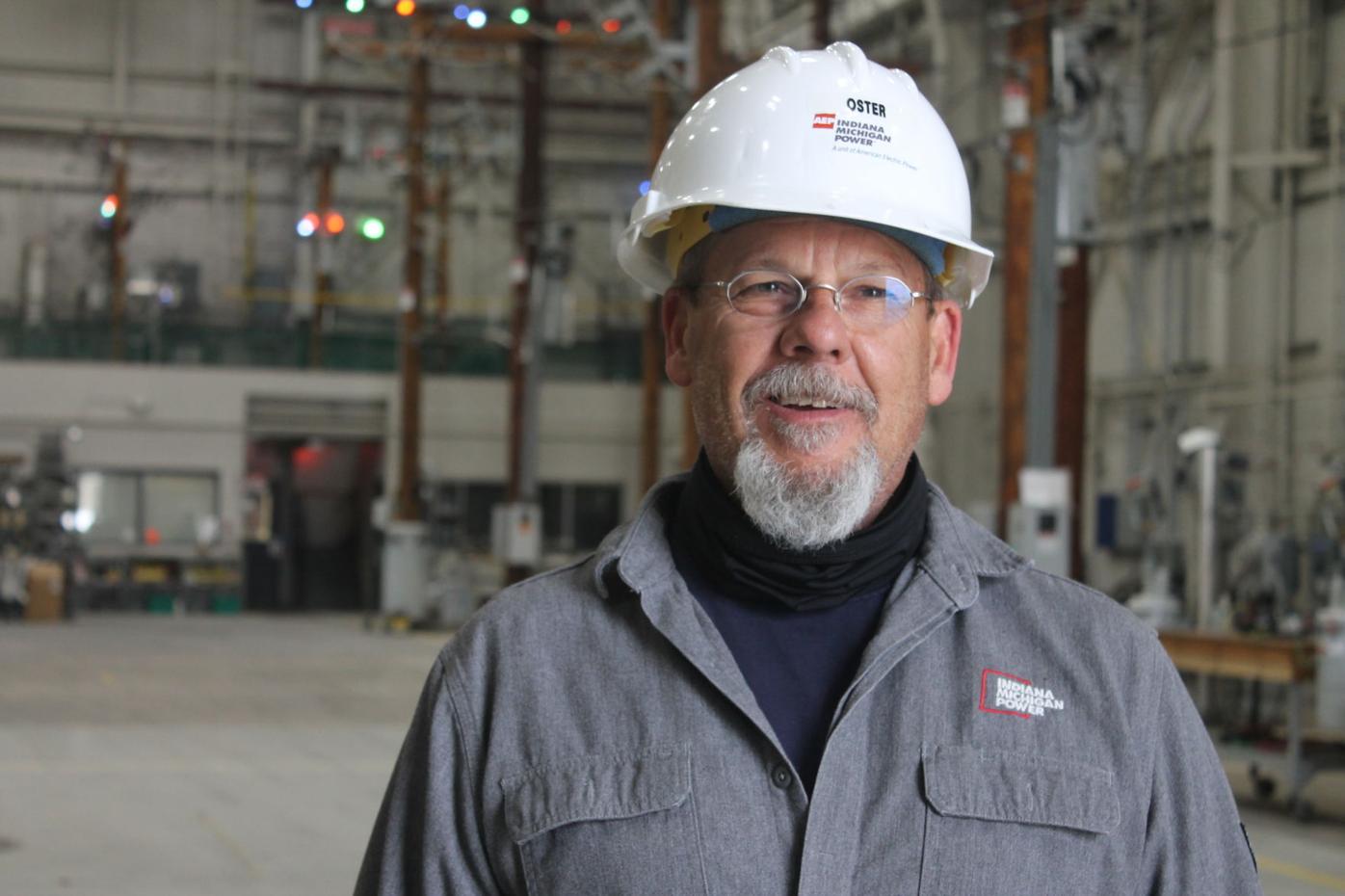 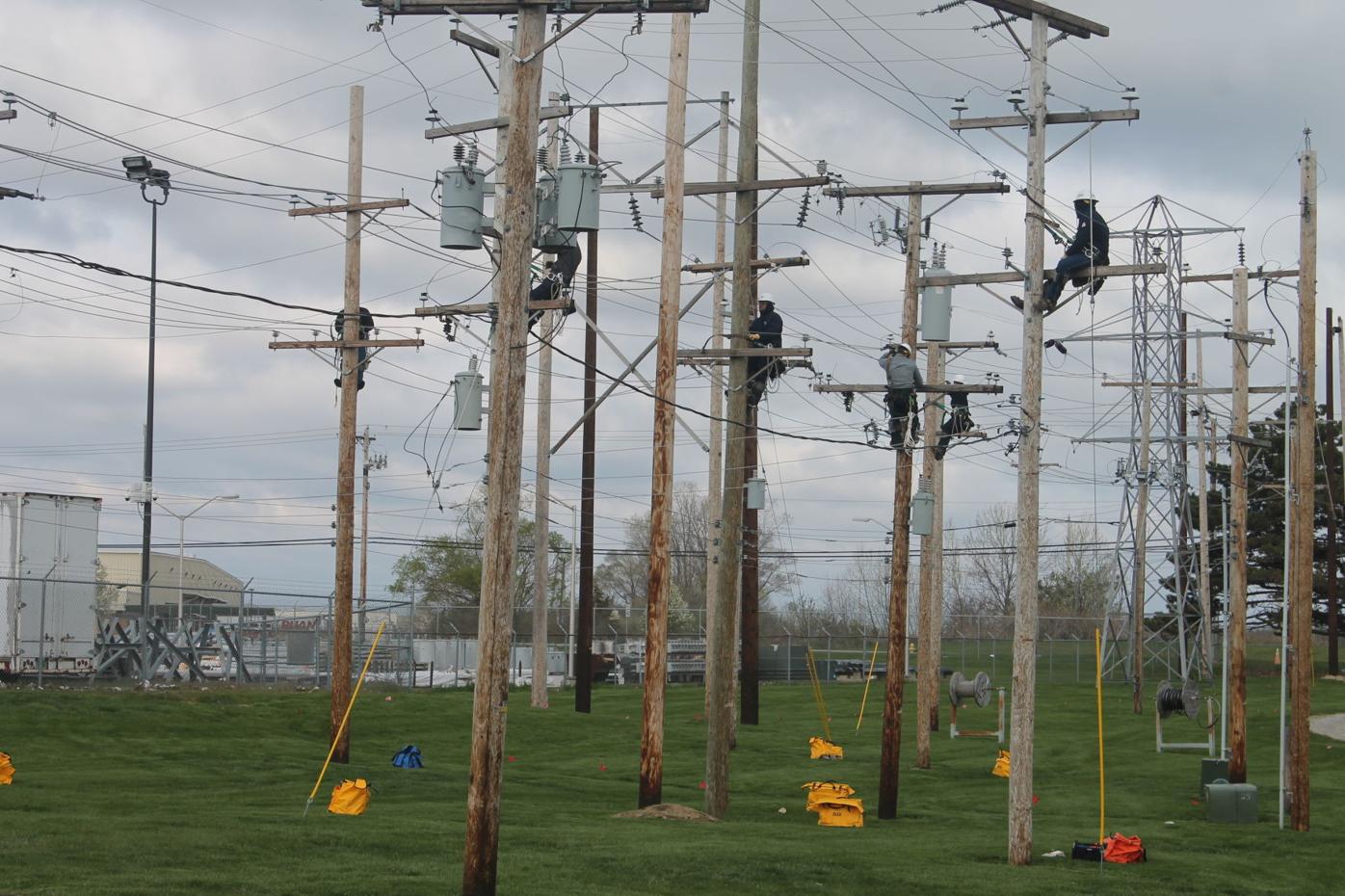 A group of line mechanics-in-training work on outside poles at Indiana Michigan Power’s Fort Wayne Training Center on a cold, windy spring day.

A group of line mechanics-in-training work on outside poles at Indiana Michigan Power’s Fort Wayne Training Center on a cold, windy spring day.

Ask lineman Kim Oster about the worst conditions he’s ever worked in, and the first event that comes to mind is the ice storm that hit the area right before Christmas 2008.

The temperatures plummeted, the wind whipped up and the heavy coating of ice broke branches and toppled trees. Some areas were without power for 2-3 days as line mechanics worked in the bitter cold to restore electricity.

The line mechanics have to wear rubber gloves as they work. “It doesn’t take long for your hands to freeze,” Oster said.

And because there was so much damage, “you don’t know if you’re going to be home Christmas morning,” he said. “The worst storms seem to be around the holidays.”

A group of new hires was outside, up on poles, on the cold, windy overcast day. It was chilly even for those on the ground. But for an experienced lineman like Oster, it didn’t compare with the extremes of temperature he’s endured while working to repair lines.

Just as miserable as working in bitter cold is working in oppressive heat and humidity. The aforementioned rubber gloves, which go all the way up to the shoulder, are as unpleasant in the summer as they are in the winter. Oster said he’s seen guys take off those gloves, turn them upside down and pour sweat out of them.

One of the most memorable storms Oster remembers is the Derecho of June 29, 2012. The quick-moving storm popped up in the middle of a heat wave. (The day before, the temperature had been 106 in Fort Wayne.) A wind gust of 91 mph was recorded at Fort Wayne International Airport.

The strong winds toppled trees, many of which were old and huge. Power was out for over 80,000 people in the area; in some areas, it was out for days.

The storm didn’t cool things off, either. As linemen worked to restore power the temperatures stayed in the 90s.. And, as Oster said, the derecho and a subsequent, less intense storm a few days later occurred right before a holiday — the Fourth of July.

Power company crews are often deployed to other areas when a storm or other event does major damage to power lines.

Oster remembers going south after Hurricane Katrina. They went to Miami first but were then sent to Gulfport, Mississippi, which was badly damaged by the hurricane. The crew worked 16 hours a day, seven days a week. There was nowhere to stay, so the crew took up temporary residence at a strip mall, where they set up underneath awnings. They had air mattresses to sleep on, but no tents. They took “showers” by pouring water from water bottles over their heads. “We had a great time,” he said. He was away from home for 19 days.

So why get into this line of work, which is both dangerous and brutal? Oster said it pays well; he was able to support his family, and his wife didn’t have to work outside the home while the children were growing up.

And it does provide a sense of satisfaction. “All of a sudden the lights come on and you hear clapping and cheering (from residents)” he said.

When residents see crews from another city or state in their area to do repairs, they really show their appreciation, often lining the streets to offer thanks as the bucket trucks roll by.

Being without electricity for days can be miserable for people living in those conditions, especially during extreme cold or head. They get grouchy.

But the one group they don’t seem to take it out on are the linemen. People don’t often crab to the people trying to make their world right again.

Oster said they hear positive comments from the public about 99.9% of the time.