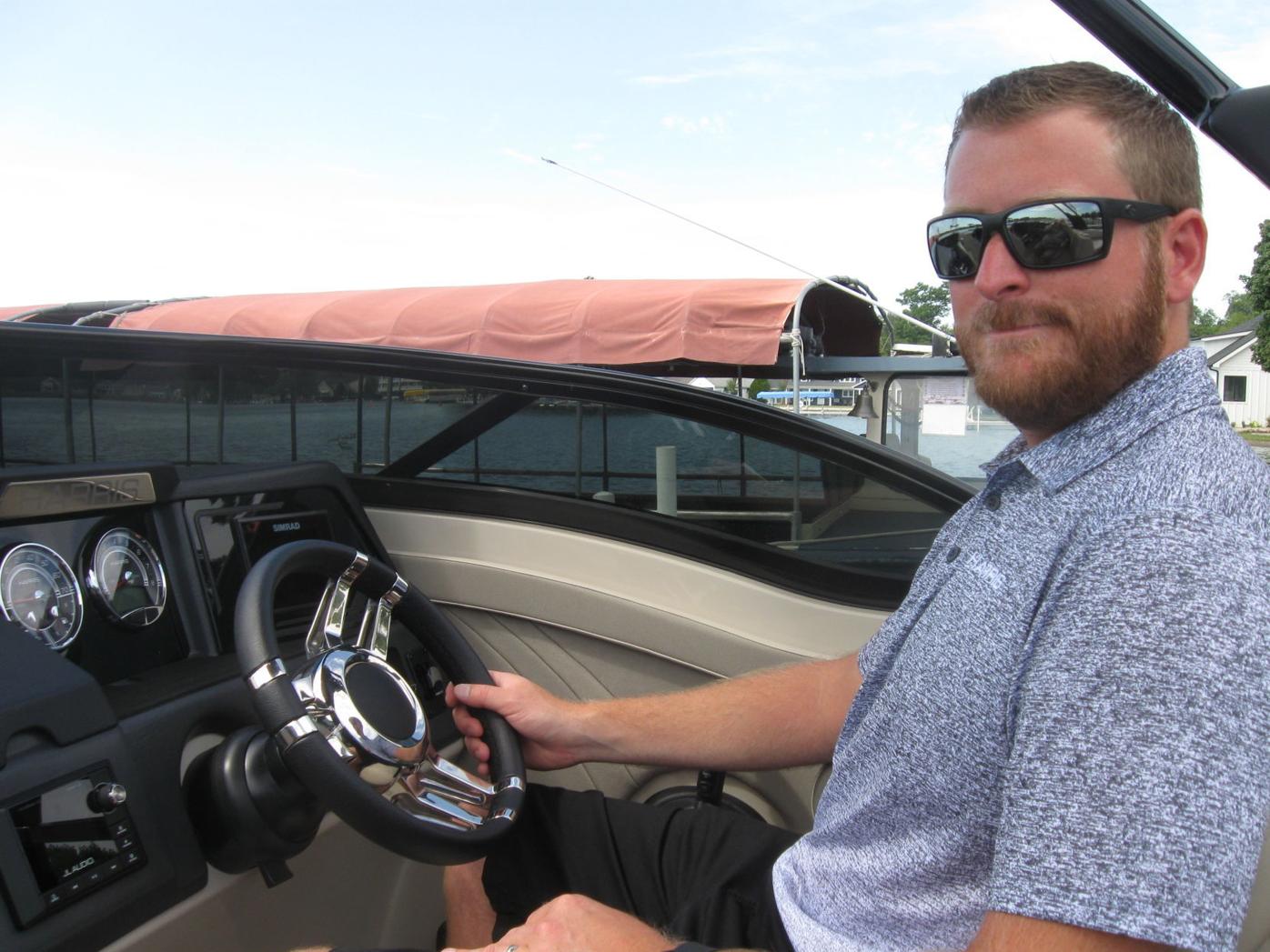 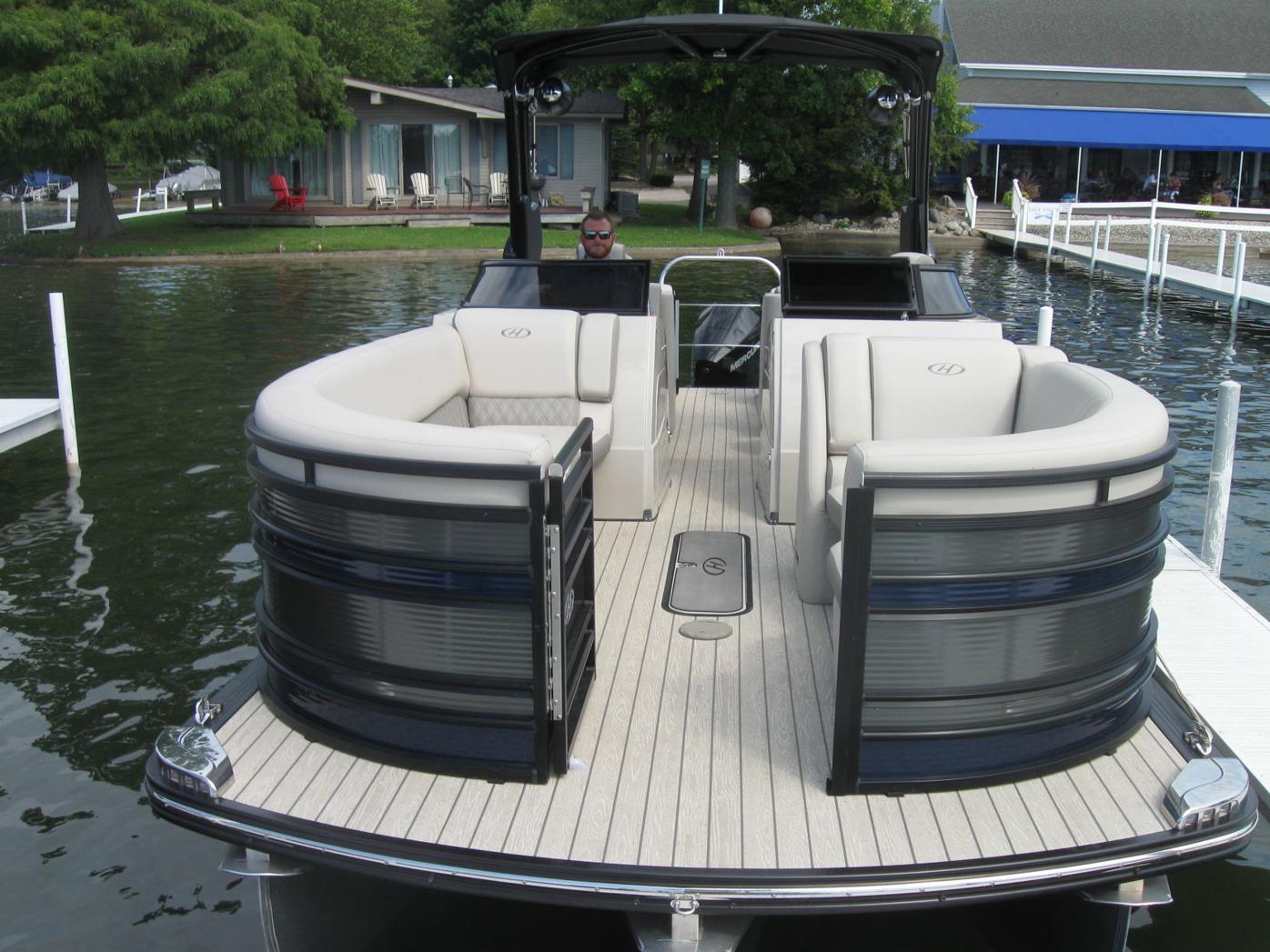 Brunswick Corp. is looking to make a big splash with its Harris Solstice.

Updates in the latest version of the Solstice DC 250 illustrate the kind of commitment to Brunswick Corp. product improvement that has helped grow the workforce at its Fort Wayne pontoon boat plant.

Pontoon boat sales have been heating up along with the economy, and the plant has increased the size of its workforce by about one-third this year. It expects to see an additional 20 percent head count increase next year.

The 2019 Solstice became available at boat dealerships in August, and reviewers with Pontoon & Deck Boat magazine saw a lot to like when they included it in September testing they conducted at the Oakwood Resort off Lake Wawasee near Syracuse for a January edition distributed at boat shows across the country.

“We were impressed with the look of the helm. It’s been updated, you can tell, and it’s … been done in a very attractive way,” said Brady Kay, executive editor at Harris Publishing, said after the testing. Harris Publishing, which owns the magazine, has no connection with Brunswick.

“It had a nice digital display. Today these digital touch screens provide a lot more information and allow you to dial in your performance and information on everything. It shows how technology has evolved even with the pontoon segment.”

The boat’s arch or wakeboard tower is not new to the 2019 Solstice, but its appearance and capabilities have been updated and “we definitely like that look for making the pontoon look sportier,” Kay said.

The Solstice and another pontoon boat made at the local Brunswick plant, the Cypress Cay Cabana 220, were among 27 pontoon and deck boats tested by the magazine for comparison in an upcoming edition. The boat maker was particularly interested in how the Solstice fared because the Cabana was completely redone about four years ago.

The new Solstice featured “a totally new tower,” said Mark Wyrick, marketing manager for Brunswick’s Fort Wayne operations. “It’s got more shade coverage and it’s a power fold versus manual operation. And you’ve got the ability to add speakers to it. It has a tow point where you can tow a skier or wake boarder.”

“The top of the helm is all new. The way we lay out the gauges in relation to the steering wheel and where the buttons are is better,” he said. “It has a more asymmetrical design; everything’s a lot more visible now and easier to read. We’ve integrated a little more technology into the helm than in previous years with the use of digital gauges and touch screens.”

“Every year we take a lot of feedback as to what people are more interested in and what is trending. We just kind of answer the call for more benefits, more features, newer styles,” he said.

Pontoon and deck boats have long been appreciated for the number of people they can carry compared with other watercraft their size, and their sales have grown substantially during the last decade or so as their speed and handling at higher speeds have improved.

The addition of a center pontoon was an important step in the industry segment’s evolution because it provided greater lift and better handling characteristics and allowed pontoon boats to carry more people and accessories.

“The triple pontoon configurations have been around for a lot of years; they’re just really going now, and expanding on that recently in the past few years with higher and higher horsepower capacity,” Wyrick said.

The new Solstice DC 250, for example, can handle up to 400 horsepower. “If you look back 10 or 15 years ago in the pontoon industry, no one was getting anywhere near that high an engine,” he said.

The improvements in the latest version of the Solstice did not require any special retooling at the 360,000-square-foot plant Brunswick operates with a workforce of 400 at 1111 N. Hadley Road.

But, each year the company invests in the equipment it uses there to improve production capacity or overall product quality, Wyrick said. “So, we may be introducing, say, a new machine or a new tool that allows us to do a process better or faster.”

The company employed 161 in Fort Wayne in 2013 when it relocated local production to the Hadley Road facility to accommodate growth it was expecting. Within two years, it told local economic development officials the plant’s workforce had expanded to 255.

“We plan to hire an additional 100 over the next year, mainly welders and skilled labor. The pontoon industry in general has been seeing extreme growth. It’s one of the fastest growing boating segments at the moment,” Wyrick said.

“In general, a lot more people have discretionary income since the recession, and a lot of people, especially the ones who are interested in pontoons, are starting to have a lot more free time,” he said. “They’re hitting retirement age and getting into boats.”